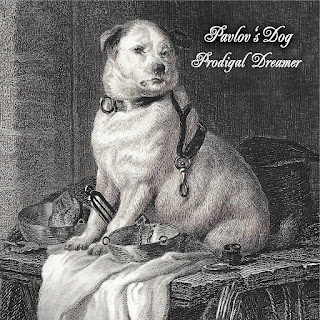 Every now and again, an album comes to me that makes me stop and go...."ummmm....huh.  Okay then...".  Pavlov's Dog is a band that does exactly that with the release of Prodigal Dreamer, their first album in 8 years, and only the eighth record in the band's 47 year history.  You read that right...47 year history!  Other than the background information I had in the press sheet and the little I pulled from some research, I honestly know exactly ZERO about this band, so I was starting in that same place...ground zero...when I put the album on to play.

First off, Prodigal Dreamer is the type of album that really should be played on vinyl; there is no question about that.  In fact, this is the type of music that used to be on the turntable when I would walk by this old hippie's house on my way home from campus when I was in college.  (Oddly, this was in the late 80s/early 90s, and he wasn't old enough to be a true hippie, but I think he had partaken of a bit too much of the 60's generation's "mood alterers", if you catch my drift, man...)  His was a steady...and LOUD...diet of Grateful Dead, Phish, and a bunch of 60's and 70's folk/progressive rock, and on the harder end of the spectrum, Pink Floyd, Kansas, and Rush.  And it was always on vinyl, long before vinyl became cool again.  Everything about the sound and style here says that this would go even better with the hiss and pop of vinyl, but my digital files will have to do.

The second thing about Prodigal Dreamer that you should know is the album was recorded in a rather unique fashion, using what is known as "room-miking", with the entire band all performing together live and at the same time, rather than in parts or in separate sound booths.  That fact blew my mind, as the complexity of some of these songs would seem to require multiple takes and retakes to get down correctly.  But for all seven members, plus the guest musicians, to get together and jam together and pull it off is absolutely mind-blowing to me.  That takes some talent, regardless of the style of music being played.

As to that style, well, it is definitely not the style of music I would normally listen to.  Progressive folk rock is probably how I would describe it, but I am not sure if that is altogether accurate.  Band founder/lead singer/composer/arranger/guitar player David Surkamp sounds to me like what I would imagine a child of Bob Dylan and Geddy Lee might sound like.  While not quite as rangy as Lee, and not quite as nasal or whiny as Dylan can be, Surkamp finds a slot somewhere in between and pretty much stays the course there.  There is an emotional quality to his vocals that is definitely unique, and the slight warbling vibrato he employs in places adds a uniqueness to his sound.

The music here is pretty much all acoustic, although there are interspersed electric guitar sections, some of which are pretty good, honestly.  The extended solo on "Thrill Of It All" is quite tasty in a psychedelic 60s rock kind of way, and it really sets itself apart from the rest of the reggae-ish, bass-driven approach that drives the majority of the track.  Some plaintive Hammond B-3 organ also drops in from time to time, but for the most part, this is pretty much an unplugged record for most of the performers here.

Lyrically, Surkamp seems to stick to songs about lost love, unrequited love, pain, and painful memories, which suits the musical style well.  "Easter Day", for example, starts off with "It was rainin' out in Georgia, when I found where the rainbows end.  So I poured myself some bourbon, and I drunk myself to sleep."  Surkamp's wife, Sara, takes a turn on lead vocals for this song, which uses liberal doses of violin, piano, and sparse drums, and her voice is stark, dry, and wracked with pain...and about an octave lower than that her husband uses.

In speaking of the violin, Abbie Steiling's work is all over this record, and she is truly talented, there is no question.  The same can be said for the Hammond B-3 work of Mark Maher, which is strongly featured in a couple of tracks, with "Shaking Me Down" being a song in which the instrument is the predominant feature for the most part.  There is also another interesting guitar solo in this track, but if I'm honest, I'm not all that sure the guitar solo fits the rest of the song, at least not all of it.

I was really shocked at the lack of rock here, to be quite honest, and to declare this to be anything more than mood music would be disingenuous on my part.  The problem is, I'm not entirely sure what mood I'd have to be in to listen to this with any kind of regularity.  There's just nothing here that is overly interesting or memorable to me.  Again, I don't question the talent, and I don't doubt the earnestness with which it is performed, but there is really nothing to grab onto here...at least for me.  After spinning through the album half a dozen times, I can't tell you with any confidence the names of any of the songs, the choruses, or even the idea behind a single track.  If I'm being completely candid here, I had to actually listen to the album the entire time I was writing this review just so I had some recollection of where the guitars drop in or where the Hammond has a voice.  In fact, the only thing I can say with 100% confidence is that Abbie Steiling is a fantastic violin player, that David Surkamp has a unique voice that I would assume some find absolutely perfect...and others find terrifically annoying...and that Pavlov's Dog is simply not for me, at least on this record.  I have read that older records had a lot more rock to them than this one does, so perhaps those would be a better place to look for fans of this art rock/folk rock/progressive genre.