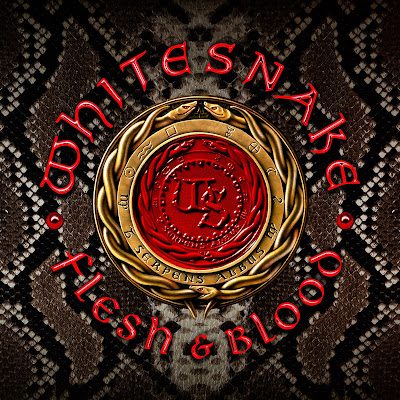 Believe it or not, it's been 8 years since Whitesnake released the very strong Forevermore, which found its way into 2011's Top 11 of the year.  It has also been just over three years since the band released the relatively disappointing The Purple Album, which was...well...it wasn't good, and even more, it was unnecessary.  And whereas Forevermore felt like an album from a band that had a new fire lit in its belly, The Purple Album felt a lot like a band running on fumes.  So when I heard that Coverdale and Company were firing up the Whitesnake machine for one more run, I have to admit I was rather guarded in my feelings about it.  Which version of the band would we get?  And, more to the point, could the band even attempt to recapture what they had back in 2011...let alone what they had back in 1987?

The answer lays somewhere in the middle, in my opinion.  There are some massive arena rockers that would likely have dominated radio and concert venues were this 1987, with "Hey You (You Make Me Rock)" being chief among them.  With a huge, chant-along chorus, thundering drums, and some catchy guitar licks from Beach and Hoekstra, this type of track was what made Whitesnake the huge band they were in that time frame.  Coverdale sounds great here; a bit aged, vocally, but still powerful overall, and the band feels energized and excited.  The solo here is top flight fret running from Beach, and Devin's bass is a welcome presence throughout the track.  It's not hard at all to imagine fists thrusting into the air with every big "Hey...You...", nor is it difficult to envision a hundred Tawny Kitaen wannabes bumping and grinding in the front row.

"Gonna Be Alright" is another straight-outta-the-80s rocker that just sounds like Whitesnake.  Seriously, by the time the track is just 20 seconds old there is zero doubt that this is Whitesnake.  The subtle hints of keyboards, the catchy guitar hook, the purely-Coverdale lyrics, the laid-back-yet-ultra cool guitar solo....all the ingredients of the soundtrack of 1987-1989 Whitesnake.  In fact, if you had 1987 Coverdale vocals and production on this song instead of 2019 Coverdale vocals and production, it would slide nearly perfectly onto either Whitesnake or Slip Of The Tongue.  To put it simply... This.Is.Whitesnake.

Likewise, 80s radio-rockers like the opening "Good To See You Again" (What?  Me?  David Coverdale is glad to see ME again?!), and lead single "Shut Up And Kiss Me" (see video below) have a sound and feel that are undeniably from the 80s, even if "Shut Up..." feels a bit more Y&T than classic Whitesnake, at least to me.  You have to forgive Mr. Coverdale for borrowing from his past as he brings back the infamous white Jaguar...and even his jacket...from the now classic "Here I Go Again" video, but I have to admit it is pretty much embarrassing to watch these new "video vixens" doing their best Kitaen as they writhe around on the hood of the car.  Come on, David!  These girls could be your grandchildren, for crying out loud!  The song is catchy and the band definitely looks like they are having a good time, with the interplay between Hoekstra and Beach particularly strong here.

Indeed, it is the harder, heavier numbers where the band is at their best here, with the tasty-if-lyrically-cliched "Trouble Is Your Middle Name" being one of my favorites here, with some exceptionally strong guitar work.  "Get Up" is another great rocker, sounding a lot like the material the band was working with on the Slip Of The Tongue album in 1989, with Aldridge's drums sounding particularly snappy here, with more classic solo runs from Beach and Hoekstra.  Where the band works best, however, is on the slithering "Well I Never", which sounds as if it could have been written for their classic, self-titled release.  The bass line absolutely throbs its way throughout the track, and the guitars slink and slide their way through seemingly every open space on the track.  Aldridge's drum sound here is huge and arena shaking, with this rhythm and patterns, particularly as they build up to, and then support, the guitar solo being some of the best on the record.  Coverdale works his magic on this track, as well, making even the simplest of choruses feel bigger than it actually is.  This type of song is classic radio-era Whitesnake and likely exactly what most fans are looking for from this record.

The sultry "Heart Of Stone" is an excellent contribution here, also, carrying a tempo relatively similar to "Crying In The Rain", using that bluesy bump-and-grind rhythm that finds its way into so many great Whitesnake songs.  Teasingly close to a ballad, but too ballsy and too heavy to really fall into last slow dance at the prom territory, this is another example of what Whitesnake does, and has always done, so well.  The guitars are especially soulful here, and the trade-off between the bass and the drums works exceptionally well.  I'm also a big fan of what the band does on album-closer, "Sands Of Time" with it's big, nearly "Kashmir" guitar hook, as I have always felt this type of song was the strong suit of the band (think "Still Of The Night" and "Judgement Day" as excellent examples), incorporating that hard bluesy swagger of Zeppelin with the bottom-heavy crunch Whitesnake always utilized in their best moments, and those scorching, searing guitar solos that seemed to run throughout these big songs, regardless of who was manning the axe at the time.
There are a couple of misses for me, however, which is probably to be expected when an album is stretched to 13 tracks.  The acoustic "After All" really does nothing for me, with its layered backing vocals and sappy sentiment, and it ends up sounding to me like something the bridesmaids and flower girls might walk down the aisle to.  And there's just something about "When I Think Of You (Color Me Blue)" that just doesn't sit well with me.  It sounds too much like a recycled song to my ears, with nothing particularly catchy about it.  It's not a horrible song, its just not memorable at all.

The production is generally pretty good, although I'm surprised more effort wasn't given to pumping up Coverdale's vocals just a tad.  40 plus years of singing, screaming, wailing, crooning, etc., have thinned things out a bit for Mr. Coverdale, even if his hair doesn't appear to have thinned at all!  Even so, there is an undeniable charm to the fact that Coverdale apparently accepts his voice for what it is now, so perhaps Frontiers did the best thing they could do in this case, which was to do nothing.  The separation of instruments is very good here, and I don't detect any issues with muddiness at all.  In fact, if anything, some songs feel a bit tinny when I listen to them in my home, but when I put them in my Tahoe's CD player, these problems seem to disappear, so I'm guessing some subtle EQ adjustments at home would clean this right up.

There are a couple of bonus tracks, as well as some remixes on the CD/DVD version of this release, so completists will likely want to track that version down.  Me, I never watch the DVDs, so I don't see myself hunting that one down.  I'll likely just buy the bonus tracks somewhere and burn myself a new version of Flesh & Blood without "After All" and with the bonus cuts thrown in.  I'm also not much of a remix/radio edit guy, so those types of tracks are generally lost on me.

So, in the end, how does Flesh & Blood fare in stacking up to classic-era Whitesnake, or even the excellent-but-overlooked Good To Be Bad/Forevermore-era Whitesnake?  I think this is a strong record, overall, and it is leaps and bounds better than The Purple Album, and I personally think it is a stronger album, overall, than Slip Of The Tongue.  Maybe not quite to the Forevermore level for me, but darn close, I found myself really enjoying this record, despite my original concerns.

Back To Reviews Index
Posted by arttieTHE1manparty at 4:22 PM