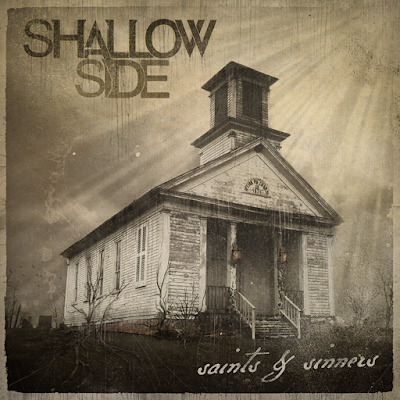 "Hallelujah" may be a ways down on the track listing for Saints & Sinners, the newest release from Shallow Side, but it pretty much sums up how I feel about this record, because I absolutely feel like screaming "hallelujah" when I give this record a spin.  Modern hard rock meets driving southern rock is the best way to describe the sound of Shallow Side, as these Alabama boys continue to work at carving a unique niche for themselves in the hard rock world.

The album kicks off with the catchy rocker, "Revival", driven by an aggressive rhythm guitar line and some really good, hard rock drumming from Fields.  A strong bass line rumbles away at the bottom end of the track, but it is the gritty powerhouse vocals of Boatright that are likely to grab the attention of the listener as he warns the listener, "I'd tell you the truth, but the truth is you wouldn't bother/A bird in the hand is worth two in the bush/Ohhh, I wasn't born to be a follower, I was born to lead...Revival!"  Boatright's powerful tenor glides when necessary, and adds hints of tension and aggression when called for, all withing just this one song, and a great lead-off track it is!   But its's with the next track, the album's title track, "Saints & Sinners" that the greatness of this record is found.

As much as I enjoyed the band's southern-fried modern rock on 2016's One EP, everything is bumped up a notch or two on this record.  On "Saints & Sinners", the lead-in guitar line and bass drum/hand-clap percussion is pure ear candy for the Bon Jovi "Blaze Of Glory" crowd, but once the first verse is done, the big guitar riffs punch you in the nose, the drums kick in, and the much harder, rockier chorus drives its way into your head.  Another verse, another spin through the chorus, and then a great track gets greater, as Trimble rips into a tasty guitar solo that is accentuated by a chugging rhythm guitar and big, chunky drums...and then it all evaporates back into that opening acoustic guitar riff for a short refrain, and then its off and running through the chorus again, complete with big backing vocals, before the song is allowed to fade away.  I can say with 100% honesty, I have never made it through this record without hitting repeat on this track at least once...never.

"Sound The Alarm", the album's lead single, is up next, and it is one of the most straight-forward, hard rockers on the record.  Trimble gets downright crunchy on his guitar lines here, and Daniels' bass presence is definitely felt on this track as well.  Boatright is in fine form as well, especially when sneering and leering through lines such as "I'd like to see you naked/Stripped down, show me who you really are..." that he kicks things off with.  There is a lot going on here and while it gives the listener a taste of the musicianship and the tightness of the band, I do miss the southern rock taste that slips and slides throughout so many other tracks here.  It's definitely worth checking out below, however...

Remember just a few minutes ago when I was telling you how great the title track is?  The thing is, it's actually my second favorite track on the record, as "Drugs & Lust" is just that much better for me.  Hinting at grunge with the guitars, especially the sludgy, down-tuned riff that trails out of the chorus section and the Cantrell-esque guitar solo, along with big, gang-shouted backing vocals, Boatright running the full range of his vocal styles...from singing to shouting to snarling...and some absolutely snappy drum lines, this is just such a great track that, once again, I always find myself hitting repeat on.  To be candid, I burned a copy of the album for my truck with both "Saints & Sinners" and "Drugs & Lust"...and "Hallelujah"...repeated at the end of the disc, just so they were there one more time.

"Temptations" is so laid back in comparison to "Drugs & Lust" that were it not for Boatright's vocals, you likely might wonder if it was the same band.  Starting with an acoustic build, this track is definitely bottom-heavy in all the right places, and the song's slower-tempo and change in style really showcase the musical range of the band.  Boatright continues to be exceptionally powerful, although he is able to dial things back at times to fit with the style of the track.  He even allows himself to slide to the upper ends of his vocal range in a couple of spots, which he handles with no audible stress at all on this song about one's vices and the desire to return to them again and again, even if we know its not necessarily in our best interests.

Did I mention liking "Hallelujah"?  If not, I'm mentioning it now, because this is yet again another example of the hard-hitting power of this band.  Catchy songwriting is abundant on this record, and this is another example of it.  The track borrows heavily from 80s/early 90s arena rock in its structure and approach, with some nice, crunchy guitars and big...BIG...anthem-driving drums, along with those layered backing vocals once again.  No, this doesn't sound like something Warrant or Poison would've played on the Strip, but it has the spirit and soul of that era, while still sounding modern and relevant to today's rock scene.

"All Rise" has a way cool bass line and simple snare/kick drum pattern to intro it, before some big, crunchy guitars jump into the mix to churn things up...and then just as quickly back way off to some simple riffing below the vocals, clearing the way for Boatright to step up and vocally punch the listener in the face on the chunky, rhythmic chorus.  A bit of "down home" picking exits that first chorus section, with Boatright jumping back into the second verse, this time with a bit more aggressive guitar work backing him up, but that same fat bass line still rolling along.  Sometimes beauty is found in simplicity, and the ease of the chorus here, "Tell me are you reck...less.../Tell me are you reck...less/If you really don't give a damn/All rise!" is pure fist-in-the-air, adrenaline-fueled, chant-along material and something I would LOVE to witness in a live setting.  And, having had the opportunity to see a show and hang out with the band a couple of years ago, let me tell you, a live Shallow Side show is one opportunity you should not pass up.  Great dudes...

Just as you are recovering from the punchiness of "All Rise", the band totally swerves on you with the follow up track.  "Not Alone" is a really cool musical piece with a curveball intro in the form of a really nice piano line that glides along with Boatrigtht's emotional vocals for the first 45 seconds of the track, before the drums and bass join the gorgeous arrangement.  I absolutely love the longing of the chorus here, especially when Boatright emotes, "My heart wants to stay, but I gotta go/It kills me to leave, but I want ya' to know/Remember, remember, remember...you're not alone...".  The emotion Boatright packs into his vocals is absolutely spot on here, and is matched in intensity by the musical build up throughout the track, with the piano a perfect complement to the harder guitars and big bass presence.  This is yet another track that I have a hard time allowing to just fade out, as I always seem to want to reach for that repeat button at least once.  The musicality of this track is virtually unmatched on modern rock radio and tracks like this absolutely deserve to be heard.  Again, I would love to see the band pull this off live, as it would be a total treat to watch Boatright absolutely own the vocals here, and to become immersed in the musical experience created here.

"Carry On" closes things with a chug-chug-chugging guitar line and a catchy drum pattern, big "hey, hey" backing vocals on the chorus, and a huge hook that snags you right in the ear hole and keeps you hanging around until the end.  Some big piano sounds are embedded in the mix, and Trimble has some nifty guitar acrobatics all intermixed in this big musical display where, somewhat oddly, Boatright's vocals are not the centerpiece, at least for me.  This is just a great band effort and an example of truly interesting songwriting.  Whereas many band would have just gone back to a previously utilized song structure and formula and slapped together one last track, Shallow Side made the decision to go out on a high note, challenging the listener with yet another change in style while still managing to sound like themselves.  Kudos, boys!

Look, these guys should already be huge, with  three really solid EPs, a retrospective album (which covers the first two EPs to a large degree), and so many great tracks already in their catalog ("We Roll", "Can You Hear Me", "Rebel", and their cover of the Styx classic, "Renegade", to name a few), but this album just has a magic about it.  If this album doesn't break these guys big, there is something seriously wrong with rock radio (I mean even more than we already know is wrong with "corporate" rock radio...).  This is a beast of a record that I can't stop spinning, and I can guarantee it will be in the Top 19 of 2019 at year's end...and it will be near the top!  I simply love Saints & Sinners!

Posted by arttieTHE1manparty at 9:38 PM