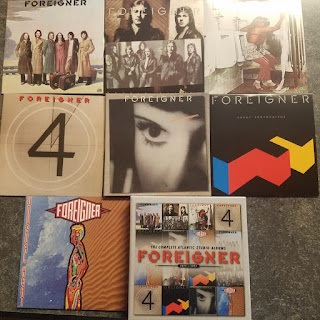 For anyone who knows me, or who reads G2G with any regularity, it is no secret that Foreigner is one of my all-time favorite bands, hands down.  Additionally, I am a sucker (it seems) for buying just about anything that Foreigner releases, even in their current "only-one-original-member-left" version, despite constantly vowing not to do it.  However, this purchase was an intentional one, as when I first heard that Foreigner was releasing a boxed set, I knew it was something I was going to own.  And, while I realize it was released 5 years ago, I never got around to reviewing it until now.

First off, let me make a tiny correction here, as the title of the set is actually incorrect.  It is called the "Complete Atlantic Studio Albums" but there are two problems here.  One, Records isn't included.  Yes, I know that it is a greatest hits package, but it is also technically a studio album.  Second, while speaking of greatest hits packages, the superior The Very Best...And Beyond is also not included despite being an Atlantic release.  This one is the biggest omission, which I will get to in the CONS section.

There are definitely some pros to this collection.  I mean, it's Foreigner, so right away there is a pro!  But as to actual pros...

PRO 1:  For starters, it is nice to have all of the band's Atlantic releases in one, easy-to-access boxed set.  If the mood strikes, I can just grab the set, toss it in the Tahoe, and be off.  And the box is a pretty solid one, I have to admit.  Even after owning it for several years, there is still nary a scratch, nick, or ding in the package, which says something about its construction, I think.  It is something of a clamshell box, ranther than a lid-and-base box, and the spine of the box is jointed in such a way that it is easy to get the individual CDs out without having to dump them all out.  (I do still dump them all out, however, which I will cover in the CONS section)

PRO 2:  As tempting as it may have been, the underrated/unfairly bashed Unusual Heat was not left out of the package.  I know a lot of Foreigner purists (which I woul probably be considered to be) absolutely hate this record, but I never really understood why.  Sure, it is obviously not Lou Gramm on vocals, but how can someone say they like what Kelly Hansen does on one hand, and then turn around and say they hate what Johnny Edwards does on the other hand?  Personally, I think Edwards did a solid job and the songs on Unusual Heat had more grit to them than the majority of Agent... or Inside Information.

And now on to the CONS section, and believe me, there are several.

CON 1:  First, and most glaring to me, is that there is absolutely NOTHING in the way of a booklet here.  Nothing.  No band bio, no backstories, no interviews, nothing.  To me, this is inexcusable, especially when we are talking about one of the most successful bands in American classic rock/hard rock history.  Heck, there aren't even liner notes to any of the albums!  Why?

CON 2:  The label thought it would be a good idea to package each of these CDs as if they were small vinyl records.  Now, while this may have seemed like a cool marketing gimmick, it's actually not only limiting (due to the size), but kind of redundant with the resurgence in ACTUAL vinly records over the past 5 years.  If you want a vinyl record, you can buy it.  No need for nostalgic packaging.  Plus, if you are really going for the nostalgic vinyl look, why wouldn't you make the CDs themselves look like they were vinyl records?  These are just your typical CD faces, so it makes the vinyl packaging style all the more silly, in my opinion.  Also, the ultra-thin packages (we're talking your basic slip cover packaging here) make it impossible to determine which CD you are pulling out, with the exception of Inside Information, which is presented here in full, gatefold fashion.  But again, even on this one, there are no liner notes despite the fact that one of the cover's sides is empty and would have easily held a nice little booklet.  Just a botched job on the packaging overall.

CON THREE:  This is actually a pretty big issue for me.  There is no indication anywhere that anything here is remastered.  NONE.  In fact, when listening to them side-by-side, I am pretty sure these are NOT remastered.  Why would you go to the work of making a set like this without properly remastering it?

CON FOUR:  There are no new songs here.  In 2002, the band's first four albums were reissued, and each of those contained a handful of bonus tracks, mostly in the form of demos and live cuts.  Now, if you didn't get those reissues, then, sure, it's cool to hear a live-version-only song such as "Love Maker" on the Double Vision record, or the demo-only track "Take Me To Your Leader" from the debut,  Foreigner album.  But other than those songs, there is nothing here that makes the set a required purchase.  I was honestly expecting a full disc of unreleased material, as that was at least initially hinted at when the collection was being put together.  (Perhaps this did happen in foreign markets; I am not sure.)  Heck, there could be almost an entire disc worth of radio edits and remixes just from the Agent Provocateur record, and yet there is not a single bonus track to that album.  Not one.

CON FIVE:  Missing tracks.  Why in the world would you not include the three new songs that were included on The Very Best...And Beyond release?  "Soul Doctor", "Prisoner Of Love", and "With Heaven On Our Side" are all completely ignored.  And yes, I realize those tracks came out in 1992, and this boxed set covers 1977-1991, but it also claims to be the Atlantic studio years, and these three tracks were clearly recorded in the studio.  Just baffling to me.

In the end, this is an okay-at-best attempt at a Foreigner boxed set.  There is just so much left to be desired by fans of the band.  Now, I don't need a boxed set with hours upon hours of live shows from the Kelly Hansen-fronted version of the band, but I would be completely content with a set that includes ALL of the band's studio albums (including Gramm's last band record, the underrated Mr. Moonlight, and the relatively blah Hansen-voiced Can't Slow Down effort), the missing studio tracks from Gramm (and 2011's "Save Me", the last Hansen studio track) plus a disc of demos, B-sides, remixes, etc., all remastered and with a nice, color booklet with history, facts, interviews, photos, etc.  And if live sets were to be included, I'd take one each from both Gramm and Hansen (heck, throw in an Edwards set, also, if a good quality recording exists!).  I'd actually pay pretty good money for a pacakge like that.  But until then, I guess this is all that we are going to see as far as a boxed set goes, and it mostly sees shelf-time from me.  I just grab The Very Best...And Beyond when I want to have a Foreigner package to take with me.

Rating:  A disappointing 4 here, simply because of the poor execution on what should have been an 8 or higher package!

Posted by arttieTHE1manparty at 11:22 AM