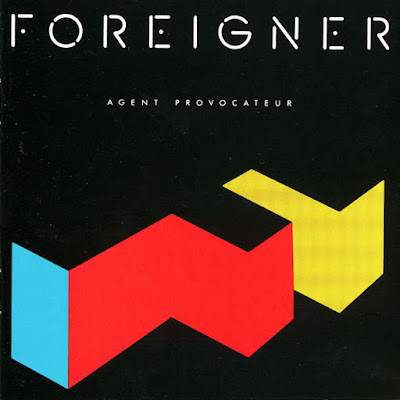 Many 70s bands who found great success with what we now refer to as "classic guitar rock" struggled to find their way through the 80s, as an infusion of heavy keyboard usage and New Wave musical approaches forced their way onto the "rock" scene.  Foreigner definitely fit the first category, as there were few bands who enjoyed more success, as their first eight singles all charted Top 20, a feat no rock band had managed...since the Beatles!  In fact, it would be difficult to find a band that had more success from 1977 to 1981 than Foreigner, as all four albums released during that time frame would chart Top 5, with the album 4 becoming the band's first Number One album.  But then the band started to tweak their sound, causing internal strife between Gramm and Jones.  Gramm wanted the band to continue down the harder-edged radio rock sound that had served the band so well in the past, while Jones began to insert more and more keyboards (and less and less guitars) into the sound.  By the time 1984 rolled around, many fans felt the band no longer resembled the band that had dominated the rock scene just a handful of years prior.

It's interesting to me that 1984 seemed to be a turning point for the band, because I have long drawn a parallel between Foreigner and another 1970s hard rock band that had found solid success, only to begin tinkering with their sound.  That band would be Van Halen and their appropriately titled album, 1984.  Think about the similarities here:

While Agent Provocateur may not be the strongest album in the band's catalog...in fact, many people consider it to be the weakest of the Gramm-fronted albums...I don't think it is as bad as it was made out to be.  Even now, more than 30 years after it was released, I think there are several tracks that stand up pretty well with the rest of the band's best material.  Notably, I think "That Was Yesterday" is truly the best track on this record and is one that I still routinely return to when I throw in a "best of" package or have access to a jukebox.  I simply love that song.  I also think the lead track on the album, the harder-edged "Tooth And Nail", is an excellent track that would have been even better if it hadn't been for the electronic drum effects.  "Down On Love" and "Stranger In My Own House" are both above average tracks, and "Growing Up The Hard Way" had the potential to be a really good song if not for the wimpy keyboards used in places a searing guitar lick or soaring solo would have proven to be a much better choice.  "Reaction To Action" is a solid rocker that garnered some radio success, as I mentioned above, even though it isn't overly memorable or inspiring lyrically, and it's hard to argue with success, as "I Want To Know What Love Is" remains the band's sole number one hit in its 40 year career.  But there is simply too much filler material, and too much keyboard dreck here for even a vocal giant like Gramm to overcome.  Tracks like "Love In Vain", "She's Too Tough", and "Two Different Worlds" just come off as flat and uninspired, and "Growing Up The Hard Way" only manages to succeed to the level it does because of Gramm.

As I mentioned above, Gramm would leave the band temporarily after Agent Provocateur to release his first solo record, which was far more in the vein of early Foreigner material than the vast majority of this record.  He would return for the next Foreigner record, Inside Information, only to leave again for another solo record, which was, once again, of superior quality.  The course the once-mighty Foreigner had charted for themselves was not one that Gramm felt he could continue with, although he did return one final time for the greatly underappreciated Mr. Moonlight album, before leaving the band once and for all, with Jones continuing on with what I can only consider to be a Foreigner tribute band, albeit one with a tremendous amount of talent surrounding him.

The production on Agent Provocateur is decidedly 80s, with heavy emphasis on synthesizers (four different men are credited with playing synth on the record), electric drums, and other electric elements.  The guitars are mixed too far in the back for my taste (when they are even allowed to show themselves), and the bass is not overly present, either.  Gramm is in excellent form throughout, however, which is one of the lone saving moments for this record.  All in all, this record isn't horrible, but it is far from the best the band has to offer.  Of course, this can be said of so many bands from the 70s who were trying to find their way through the early 80s.

Rating:  Rock this at 5.5, but if you've somehow never heard the record, you must seek it out for "That Was Yesterday" and the album cuts "Tooth And Nail" and "Down On Love".

Posted by arttieTHE1manparty at 8:08 PM