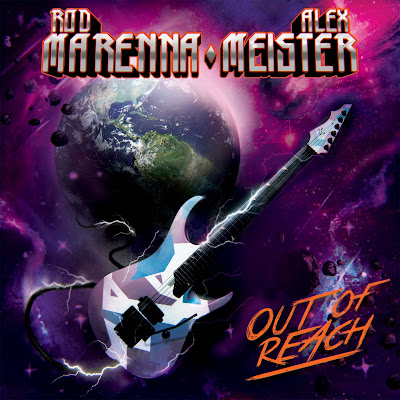 It is no secret I am a huge fan of the band Marenna, as I think they are producing some of the best melodic hard rock that you have likely never heard over the past decade.  Since the Brazilian powerhouse vocalist jumped to Denmark's Lion's Pride Music, Marenna has released a tasty little tease of an EP with his self-titled band, and now this full-length follow-up with monster axe-slinger, Alex Meister!  If you are a fan of the melodic hard rock style of the 80s, but with cleaner, beefier production, then this new "super group", Marenna/Meister is going to be exactly what you are looking for!

The album kicks off with the hard rocking "Out Of Touch", which I thought was a typo at first since the album's title is Out Of Reach.  Turns out, this is simply one of those albums that doesn't have a title track.  Regardless, this is a top-notch intro to this album, and right away the change in guitarist styles is different.  The guitar players Marenna has used in his solo band have always been of high quality, especially on his debut, My Unconditional Faith, but with this album, things are ramped up quite a bit.  The melodic quality is definitely still there, but Meister has a shred quality to his playing that was not as obvious in previous efforts.  Marenna's powerful tenor is on full display from the start, and when the rhythm guitars kick in, it is obvious there is something special going on here.  A solid bottom end from the bass and drums helps support the catchy song structure, and a massive solo ripping through the core of the track is pure icing on the cake, with the flash and flair from Meister bringing an additional spark to the always strong songwriting that Marenna brings to the table.  A fantastic start to this record!

Next up is the album's lead single, "The Price Of Love", and the melodic goodness continues in a big way!  Adding in a few keyboards, Marenna/Meister unleash an absolute must-hear track here, complete with big, layered vocals that intro the track and a driving guitar line that powers its way through the track.  To me, this is the kind of melodic hard rock that was delivered so perfectly by bands like Baton Rouge and Babylon AD back in the day, and Marenna/Meister nails the sound and style here!  Once again, Alex lays into an absolutely huge guitar solo here making the listener wonder why they have never had the chance to hear him bend strings before.  The guy can flat out get after it!  Excellent stuff, to be sure, but you can check out the lyric video below to get your own listen.

"Gimme All You Got" is another big, melodic rocker that is chock full of big hooks and a massive solo from Meister that really leaves me wondering why the guy isn't more well-known outside of South America.  Seriously, this guy has guitar god charisma dripping off of him, he has the look, he has the chops, he has speed, he has melody...so why doesn't anyone know who he is???  Anyway, this track is so typical of the greatness that Marenna exhibits with his solo band, and it is only bolstered with Meister on guitars.  Excellent melodic hard rock with Marenna's powerhouse vocals, some great layered vocals on the chorus sections, a strong bass presence throughout the track, and rock-steady drum work; what more could one ask for?

"I Don't Wanna Lose You" slows things down just a bit, teasing at a ballad with the intro before laying into a rifftastic mid-tempo rocker that absolutely nails the style!  The opening guitar riff is reminiscent of something from Def Leppard before giving way to a song that feels more like a Tyketto track or something similar.  Meister's solo here is among the best on the album as his finger do some serious flying up and down the frets and Marenna is dominant as usual.  This is definitely a top three track for me on this record.

The opening guitar riff on "(There's So) Many Things" screams 80s hard rock radio...heck, the whole song does for that matter.  The production on the drums is absolutely 1988, which is a GREAT thing, and the bass line locks in tight to support the solid rhythm guitars and yet another screaming solo from Meister.  I've noticed that a lot of Marenna's accent is gone from this record, which makes his vocals all that much better even if the accent was never really a major issue for me in the first place.

"Sleeping With The Enemy" opens with a gritty guitar riff and a massive wail from Marenna and this dirty rocker is off and running!  Probably my favorite track on the record, "Sleeping With The Enemy" really has everything an 80s rock fan could possibly be looking for, from a catchy guitar hook, a fret-burning solo, a simple, sing-along chorus, big arena-styled drums, and some really good backing vocal work.  Were this 1989, this would likely be all over Headbanger's Ball.

"It Ain't So Easy (Loving You)" slows things down quite a bit, but I wouldn't really call this a power ballad so much as a slow-tempoed rocker.  Marenna drops into the lower portion of his range, with the backing vocals following suit, and Meister lays into a smooth, soulful solo that is dead-on perfect for the track.  This reminds me of something that Tyketto might have put out in their earliest days, with a lot of power backing the polish of the song, and I would again have to put this in the top three or four songs on the record.  Love this tune.

"Dangerous Minds" has a funky bass riff and some excellent riffage going on and the song is a bit reminiscent of something Electric Boys were doing in their "Lips N Hips" days.  Definitely more melodic in the vocals department, but you get the picture.  And the album closes in fine fashion with another riff rocker in "Feel The Hunger", giving the listener one more chance to hear Marenna's vocal dominance and Meister's amazing guitar skills, including yet another scorching solo run.  An absolutely great closer to an equally great record.

The CD comes with a bonus track, but unfortunately it was not provided to me for this review.  This seems to be a licensing issue with some European labels, as rarely do I get bonus tracks in digital review packages.  Such is life, I suppose.  I am sure the track is of very high quality, as well, or Marenna would likely not have allowed its inclusion.

The production is very good, if not perfect.  The mix is definitely top notch, and the guitars are very clear sounding, as is Marenna's vocals.  There is a bit of an older sound to the production, which I found a bit odd considering how clean and melodic the material is, but after a couple of listens I honestly didn't even notice it any longer.  Again, the production isn't muddy or dead sounding (dry, flat drums, lacking bass, etc.), it just isn't as...shiny as I might have expected.  Honestly nothing lost in what is presented, however.

As much as I have loved Marenna's solo stuff, I have to say that I think I could find myself falling in line with Marenna/Meister even more, as the aggressive edge and enhanced guitar work really adds even more to what was already a favorite of mine.  I hope that this is not a one-and-done project because I feel like M&M could really be onto something special here, which is a sentiment I think nearly everyone who hears Out Of Reach will agree with.  Excellent stuff well worth seeking out!

Posted by arttieTHE1manparty at 5:36 PM