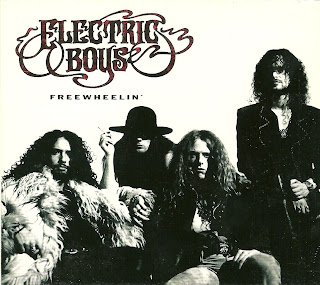 By the time 2004 rolled around, only two of the original four members of Electric Boys remained, but most would say they were the heart and soul of the funk-o-metal machine, anyway.  Lead vocalist and guitar player Conny Bloom and his longtime sidekick, bassist Andy Christell have returned with another set of heavy groove-laden material featuring a fat bottom end, swaggering rhythms, and what the band has often referred to as "funk-o-delic" songs.

More powerful and more focused, while also less-spit-shined than the band's second album, Groovus Maximus, the new Freewheelin' album finds the band hitting on all cylinders right from the start, although the sound might be a bit foreign to longtime fans.  "Ready To Believe" and "Straight No Chaser" both sound like they could have been on the band's debut album and feature the kind of stripper-inspired rhythms and sing-along choruses that the band was known for before record labels tried to polish up their sound.  "Mountains and Sunsets" falls into a similar style and groove, as well, but aside from these three tracks, however, the band finds themselves sliding into more of a 1970's inspired hard bluesy rock sound, something akin to old Whitesnake (musically...not vocally).  What surprised me was that they made it work so well.

"The Groover" is a prime example of the band's new sound...not overly heavy and pretty much funk-less, but a solid mid-tempo rocker with a nice hook and a definite 1970's vibe.  "Sad Day" slows things down with a typical 70's stoner ballad sound which has a feel similar to Alice In Chains' "Rooster" to my ears, then "Nothing For Nothing" revs the album right back up to the slightly up-tempo groove that much of the records spends its time at.   "Sleeping In The World's Smallest Bed" is one of the more bizarre songs on the disc, featuring a piano, a banjo, and then the rest of the band, and has an odd swing-styled breakdown near the end of the song.  "My Knuckles Your Face" is probably the heaviest track here, featuring a scorching solo and some pretty angry lyrics.  "Not My Cross To Bear" is self-described by Conny as being "groove rock meets James Bond", which is a pretty accurate description of the sound.  "Sharpshooter" has some interesting bass-riffing at the outset followed by a very heavy, almost-Sabbath inspired riff that breaks down into another 70's groove track.

The expanded version of this album features six additional tracks not found on the standard version.  "Some Kind Of Voodoo" continues in the Sabbath-meets-Mountain sound that "Sharpshooter" left off with, and the title track, which oddly enough is a bonus song, sounds like the Beatles may have had a hand in writing the song.  (Incidentally, the album was recorded at Abbey Road, so maybe....).  The next two tracks are demos of "Mountains And Sunsets" and "Messin' With Voodoo", which I am guessing is what "Some Kind Of Voodoo" morphed out of.  The second version of "The Groover" was recorded with a different drummer but doesn't have an overly different feel than the album version.  Final track, "Down At The Bottom" features a harmonica over another 70's inspired rocker, but don't think Stones...think something like "Free For All" Nugent when all of a sudden some guy with a harmonica decides to start jamming.  I know, weird description, but its the best I can come up with.

I think the addition of the bonus and demo tracks actually makes this disc drag out too long, especially since two of these tracks are sub-par versions of cuts that made the album.  The quality is decent, which helps, but I really don't see the need for the additional material.

While I prefer the more "funk-o-metal" sounds of the debut, or even the slightly watered down version of that sound on Groovus Maximus, Electric Boys do a very good job of pulling off their new 70's inspired sound.  I kind of wish they hadn't teased me with their old sound on the first handful of songs, however, as I was in that groove when they decided to shift gears.  Overall, a good listen that I think a lot of people will like if they give it a chance.  No real need to shell out anything extra for the extended version of this release, however.