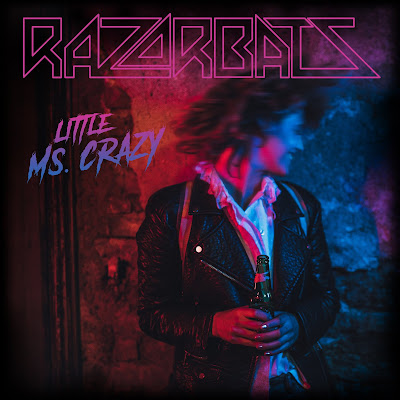 (c) 2021 Rob Mules Records
Razorbats is:
Paul Vercouteren--Vocals
Kjetil F. Wevling--Guitars
Asle Tangen--Guitars
Martin Hervig--Bass
Christian Hapnes Svendsen--Drums
Everyone's favorite Norwegian band, Razorbats, returns with a brand new single and video, "Little Miss Crazy".  Following up last year's "White Trash Radio", "Little Miss Crazy" is the latest tease from the band's upcoming album, Mainline Rock N Roll, which is set for an April 9th release on Rob Mules Records.  Band founder and guitarist Kjetil F. Wevling (he keeps the "F" in there so you don't confuse him with all the other Kjetil Wevling's out there...) told me the band is "proud of the album" which will feature re-recordings of "White Trash Radio" and "The City" (previously recorded for a split-EP with The Sick Things), as well as 8 new songs, including "Little Miss Crazy".  This latest track is a moody rocker with a cool opening guitar riff and an undeniably catchy chorus that grabs the listener from the first spin.  "Why are the cutest ones always insane?" Vercouteren asks when singing about his "Swan in a pond of doves".  The straight-forward, somewhat sparse nature of the track and its production really allows the song to take on a haunting feel, and nothing here comes off as forced or over-produced.  Hervig's bass is given a strong voice throughout the track, and a smooth, soulful guitar solo from Wevling is pure ear candy that is really set off from the simple acoustic guitar riff that runs throughout the track.  Vercouteren is absolutely spot-on with his vocals here, and some female backing vocals thrown in at the end really serve to add to the unique feel of this great new tune.
According to the press release for the track, the song "is about a normie who falls in love with a free-spirited rock chick.  Of course, he doesn't really understand her, and he starts thinking maybe there's something wrong with her."  After watching the video, I asked Wevling specifically about his performance, which finds him at all times being recorded in a mirror.  "We tried to make the most of the rooms we filmed in, and give each guy a different look.  One of the camera guys suggested it.  In addition to just looking cool, it can be a metaphor for how we see ourselves as a reflection of how other people see and treat us.  But mainly it just looks good!"  Check it out for yourself below...
And, since it has been so long since the last Razorbats album, I have thrown in the videos for their last two singles, as well, both of which are slated to appear on the new album!
Just to whet your appetite, here is "The City"...
...and the super-fun "White Trash Radio"...
All I know is that April can't come soon enough for this guy, as it has been a LONG TIME since the last full album from these guys, so Mainline Rock N Roll is definitely on my must have list for 2021!
Rating:  As per usual, I don't rate singles, but suffice it to say if you liked the moody material Razorbats released previously..."Desolation Highway", "Sister Siberia", "Born In The Fast Lane"...you will love "Little Miss Crazy" as well!
Back To Reviews Index
Posted by arttieTHE1manparty at 6:07 PM