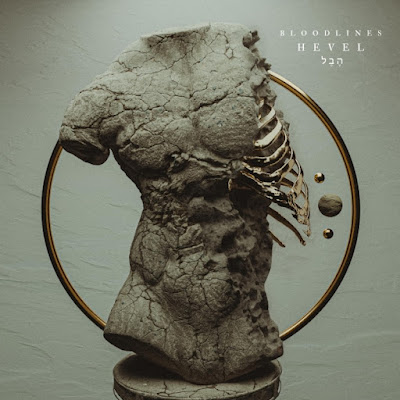 (c) 2021 Facedown Records
Alexis Rodriguez--Vocals
Daniel Camacho--Guitars
Aldo Mayorga--Bass
Matthew Benavides--Drums
Fresh on the heels of the blistering new War Of Ages EP, Facedown Records unleashes another pummeling mini-album of metalcore, this time from Bloodlines.  Entitled Hevel, which translates from Hebrew to "meaningless", the EP focuses on crushing, start-stop-start riffs, hard-hitting drums, typical-of-the-genre harsh vocals, and some really tight, clean vocal harmonies, wrapped around several heavy breakdowns, some surprisingly progressive moments...and a few surprises thrown into the mix to keep Bloodlines from becoming just another band in the metalcore world.
With most of the material here, Bloodlines takes a route not wholly unlike what bands like Fit For A King have adopted on their last couple of albums, or even fellow Texans, War Of Ages.  However, Bloodlines goes a bit further in differentiating themselves by incorporating pretty atypical instrumentation for the genre.  For example, Bloodlines incorporates hip-hop-styled electronic drum patterns into a couple of tracks here, specifically the newest single, "Lotus", and what may be their best, most diverse song, "Devil".  With "Lotus", the programmed drums hit near the end of the track, giving the track a different feel as the screamfest comes to a close.  It threw me for a loop the first couple of times through, but after repeated listens, I have to say it works pretty well and isn't the distraction it was initially.  "Lotus" also features some pretty good clean vocals on the chorus sections, and the bottom end of the track (and the entire EP, for that matter) is really tight, really heavy.
"Devil" may be one of the angriest songs I have heard in a long, LONG time.  Were it not for the fact that Bloodlines is a Christian band, and the lyrics to the song leave little doubt as to that fact, the truly demonic-sounding vocals at the end of "Devil" would send chills up my spine.  If you've ever wondered what the sound of the Biblical gnashing of teeth might sound like, you need only scan forward to about 3:30 in "Devil" (you can't miss it....it follows more of those electronic drums I mentioned), and you will hear brutal vocal anguish in a way I can't say I've heard before.
Those harsh vocals are quickly put in the rearview by the clean, melodic vocals that intro the album's lead single, "Colder".  This track incorporates some of that more radio-ready metalcore style that I alluded to on "Lotus", with some definite crossover appeal that carried the track into some non-metal/metalcore formats.  There are definitely more melodic, clean vocals on "Colder" than on the previous two tracks, and the band makes heavy use of harmony parts on the chorus, which works really well.  Even the harsh vocals don't take on the brutality level of something like "Devil", and the breakdown here is pretty sick, but non-threatening.  The lead riff on the track is one that instantly gets stuck in my head, and "Colder" is a track that stays with me for a long time every time I hear it.  "Colder" has spent quite a bit of time on various Christian hard rock and metal format stations, and really did a good job of introducing the band to the scene.  Check out the video for that track below.
"Ruah" is another straight ahead scorcher, from the aggressive guitar that intros the track to the barked vocals that Rodriguez attacks with straight out of the gate.  Multiple layers of harsh vocals carry the pre-chorus into a pretty melodic chorus with really strong clean singing soaring across some thick rhythm guitar riffs and really solid drum work.  Again, not as brutal as "Devil", and a bit more melodic overall than "Lotus", "Ruah" is likely the third single from this EP (at least it would be if I was in charge of the promotion), and I think it has the potential to do well across multiple hard formats.  Still a punishing track, featuring a solid breakdown coming out of a spoken word section...more of a prayer than anything, inviting God to breathe His breath of life upon His people..."Ruah" really has a more progressive feel to it than a lot of the music of this genre.  Good stuff.
The EP closes with the title track, which is where those progressive elements I mentioned in the first paragraph really pop up.  "Hevel" starts off very soft, very melodic, completely clean as far as vocal style, and you are lulled into a false belief that the band may actually be tackling a ballad.  Where's my Zippo to thrust into the air?!  In fact, during each of the verse sections this softer approach is utilized, with the drums taking on something of a more controlled marching cadence in places, more of a jazz style in others, but the chorus...whoa...the chorus unleashes the harsh vocals and the thick rhythm guitar and bass cords, going from a quiet, contemplative sounding track to a swirling morass of aggression and angst.  The dichotomy of styles here works really well, and while I definitely wouldn't call this a ballad (no slow dancing, for sure), there is a musicality here that I think will end up serving Bloodlines well in setting themselves apart in this genre.
How far Bloodlines goes is obviously totally up in the air at this point, but Hevel is a great starting point for the band.  This is a debut EP that makes a statement, and I hope that the band can catch on as the opener for some touring band, or get onto some festival stages, to get themselves broader exposure.  Available digitally pretty much everywhere, you can also order the CD here (I believe vinyl is also available).
Rating:  Crushingly crankable!  Blast this at an 8!
Back To Reviews Index

Posted by arttieTHE1manparty at 10:46 AM