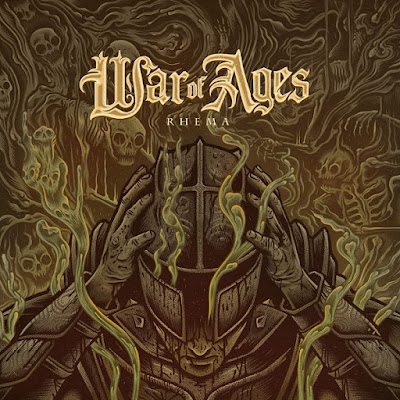 (c) 2021 Facedown Records
Leroy Hamp--Vocals
Steve Brown--Guitars
Jack Daniels--Guitars
Elisha Mullins--Bass
Kalem Luebchow--Drums
Sixteen minutes and change.  That is all you have to brace yourself for the (mostly) full-on metalcore onslaught that is War Of Ages new EP, Rhema.  16:02, is the length of the entire EP, to be precise.  That is not very long.  You can almost get your oil changed in the same amount of time...which, come to think of it, would be a great way to spend the time!  The point is that War Of Ages has just these four songs and 16 minutes to melt your face and pummel your body with crushing riffs, thundering drums, and harshly barked metalcore vocals.
And they do exactly that!
If you are a follower of the metalcore scene, in general, or the Christian metalcore scene, specifically, you likely have already heard half of this EP, as both "No Altars" and "Sleight Of Hand" have been previously released as singles.  "No Altars" which debuted in June of 2021, may be my favorite War Of Ages track ever, with its absolutely crushing twin guitar attack and Luebchow's massive drum sound all combining with Hamps signature vocals to deliver an absolutely scorching, yet somehow still melodic, slab of metalcore that fans of the band have likely been salivating over for several months now.  This is one potent track, both musically and lyrically, with Hamp barking in the first verse:
"My God will set fire to your altars!
Pray to your gods while burning in your disbeliefs!
You'll be the first to admit that you've abandoned...
All hope in your fight for integrity!"
Before the melodic pre-chorus sings:
"Oh, God, eternal
Reach down, You see all that I am.
You know my heart is yearning.
All else will fade away."
And then roaring through the chorus...
"Fall to your knees!
Bow down to the one true King!"
"Sleight Of Hand" is a bit more chaotic at the outset than "No Altars", with discordant guitars crashing their way through a brief intro before the machine gun burst of the drums bursts the song into its true form and Hamp comes out ferociously snarling at his angriest!  "Sleight Of Hand" of course, still maintains the melodic sensibility that War Of Ages is known to weave throughout the brutality of their songs, and an early guitar solo, along with the layered singing portions of the song, serve to set what War Of Ages does apart from so many others in the field.  Equally as crushing and intricate as "No Altars", "Sleight Of Hand" is another WoA track that has wormed its way to the very top of my faves list in a rapid ascension.  Truly great stuff here.

The other two tracks here are, as of yet, unreleased.  "Pyrite" is another all-out-angry crushfest, with some of the most interesting drum patterns on the EP, and an absolutely frantic-yet-melodic guitar line running through the pre-chorus sections.  Make no mistake, the jackhammer rhythm guitars and absolutely devastating drums (do I detect some blast beats in one brief section?!) set a tempo that threatens to launch the track right out of your speaker....until a sudden tempo and stylistic shift turn the song completely on its ear for about 40 seconds as a gorgeous, soulful guitar solo threads its way through the darkness that Hamp's throaty death growls delivers.  There is a LOT going on here, and I suspect fans of As I Lay Dying are going to find themselves hitting repeat, well, repeatedly on this one.

"Unspoken" sets the listener back on his/her heels immediately with the bluesy, jazzy style of guitars that intro the song.  Not kidding, I thought that somehow the preview tracks I was sent got mislabeled somehow by my computer, as those first 15 to 20 seconds are completely out of left field.  However, once the melodic clean vocals hit with a hint of what is to come on the chorus, my brain rights itself and is instantly sucked into this more mid-tempo metal assault.  Tempo-wise, this track treads very similar ground to what Fit For A King has done on its last couple of albums, although I have to say the solo guitar work here...along with Luebchow's absolutely insane drum work...set War Of Ages apart from their metalcore counterparts.

How this band has not become more well-known is beyond me.  Hamp and Brown have been hammering away at your eardrums and skulls as War Of Ages for nearly two decades now, and every release has been a blistering, sonic assault on the senses.  With the addition of Daniels in 2013, the band stepped things up even further, and with a full line-up that has been in place for four years, there is a chemistry that is undeniable on the last two albums and now this new EP.  Will Rhema be the step that launches the band into the realms of the metalcore elite?  There are 16 minutes and two seconds of melodic metalcore fury and aggression on Rhema that say it may just be the ticket.  If not, stay tuned, as I have no doubt that War Of Ages has even more to crush you with in the near future!

Available digitally, on a limited edition vinyl, and CD, snag Rhema today at     www.warofagesmetal.com and maybe schedule an oil change during which you can absorb the melodic ferocity of this EP!

Rating:  Short, to be sure, but blisteringly crankable!  Spin this up to an 8, with two or three more songs likely pushing this into 9, or higher, territory!  Get it now, metalcore fans!

Posted by arttieTHE1manparty at 12:09 PM