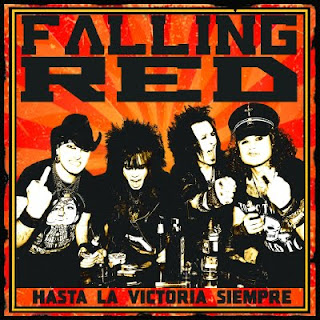 
Not even a full calendar year has passed and we have already been graced with a new release from one of the hottest, most-energetic sleaze bands of the modern generation.  Perhaps not wanting to risk being lost in the shuffle of new bands that come and go on a seemingly weekly basis, of perhaps simply because they like to do things their own way, Falling Red have decided to put out this incredibly high octane EP to tide fans over rather than wait another year or so to release a new full-length album.  I, for one, and dang glad they didn't wait!!!

Hasta La Victoria Siempre picks up exactly where Shake The Faith left off...and then twists the knobs a little higher.  This is four tracks of pure balls-to-the-wall adrenaline charged attitude.  Right from the first punkish-buzz of the guitar on "Come On Down", there is no doubt that Falling Red was not a simple one-shot act.  The sleaze just drips off the chords of this track and the band's collective middle fingers are raised to the modern rock establishment that simply couldn't contain a band of this caliber.  It's easy to see why these guys are sometimes referred to as the Guns N Roses of this generation, although I think such labels are dangerous as they rarely do justice to the bands being compared.  However, the attitude presented here, along with the gritty, ballsy performances, certainly lends itself to such a comparison.

"My Little Vice" backs off ever-so-slightly, but it is still an uptempo rocker with just a bit more mainstream Sunset Strip charm than Hollywood underbelly slime.  The guitars are once again the dominating feature on this track and Rozey's rhythm work coupled with Shane's leads offer up a nasty little teaser for anyone who missed out on Shake The Faith (if that's you, go get it...NOW!).

"The Last Kiss Goodbye" is the one song here that I think has true GnR worship written all over it, but it never goes into rip-off mode.  The guitar tone is very much in the same style as that which Slash used to such over-the-top excess on "November Rain".  With a bit of Skid Row in the vocal stylings, this is a monster of a power ballad that just screams for lighters to be held high when it's performed live.  I can honestly say I have not heard a ballad performed with this sense of power and urgency in a LONG time.  This is an awesome track that is not to be missed.

"Ain't Down With The Rock" is another nasty rocker that closes out this EP in true sleaze fashion.  Think of a much more highly charged antithesis to AC/DC's "For Those About To Rock (We Salute You)".  Falling Red already salutes their fans on a regular basis, so, in their words, if you "Ain't Down With The Rock...F**K RIGHT OFF!"  Whether you view this as a warning (you know...in case YOU ain't down with the rock...), or as a kind of personal anthem, this is Falling Red at the top of their game attitude-wise, and is a great way to close out this EP.

Checking in at just shy of 16 minutes, this is almost too much of a tease, to be honest, as I was begging for a hidden track or something.  I simply didn't want this EP to end!  I truly hope that Falling Red has some other stuff already in the can somewhere, because this is one band that I do NOT want to have to wait a couple of years to hear from again.  These guys have their sound down to an absolute artform and I would rate them with the Crashdiets and Vains Of Jennas of the world...if not a bit higher, to be honest.

Rating:  Despite being an EP, you MUST crank this little tease to 9!