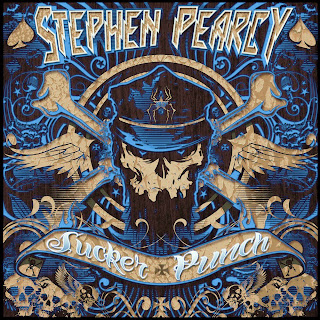 (c) 2011 Top Fuel Records
I have no idea who is playing on these three tracks, which are the first preview songs from the upcoming Sucker Punch release from Ratt frontman, Stephen Pearcy...but I can tell you it ain't Ratt...but it ain't bad!  Sure, this is Pearcy's voice, and there is no mistaking the fact that these songs have a definite Ratt feel in the writing, but the musicianship is a good notch below that of DeMartini, Blotzer, Crane, and Cavazo.  That is not to say that these songs sound bad, because they are actually pretty good.  They are definitely lacking some of the punch and style that Ratt fans may come to the Sucker Punch project expecting, but let this could be due to the production on these three tracks which MAY NOT be the final mixes; it would not shock me at all to find out that Stephen went back and remixed these songs before the Sucker Punch album is released.

So, what do we have here?  All three are uptempo tracks and have a definite Ratt-feel to the writing.  For those who have been following Pearcy on the 'Net, that should not be a surprise, as he has repeatedly, and somewhat bitterly, stated that he had several songs written for Ratt's Infestation album that were eventually cut from the final product.  He has stated that he took those songs to record for himself, and it would not shock me to learn that all three of these had originally been written for that Ratt disc.

"Too Much Is Never Enough" contains a classic Ratt sounding riff that sounds like it could have been intended for the Out Of The Cellar or Invasion Of Your Privacy albums, and is my favorite of the three.  The production is a bit weak to my ears, as the background vocals are pretty flat and drums, the cymbals in particular, sound overly out front in spots, which gives them an odd sound.  The guitars are solid, and Pearcy's voice is in fine form, which has often been a problem on his other solo efforts.

"Don't Want To Talk About It" is another solid rocker that sounds more in-line with the Infestation sound.  The backing vocals are better on this one, and the drum sound is more solid as well.  The guitar tone he chooses to use for the solo on this, and the previous song, is a bit unusual, as the distortion is turned way down and the tone has almost a 60's rock n' roll feel to it.  It's an interesting contrast that doesn't harm the song, however,


UPDATE:  As I mentioned in the opening paragraph, it wouldn't surprise me if Stephen went back into the studio and touched up some of these songs, and it appears he did just that with "Don't Want To Talk About It", as the guitar tone is beefed up and given more of a modern sound, as is evidenced in this video.  I'm liking what I hear...see what you think....
The last of the three pre-release songs is "Over & Over Again", which again has a VERY classic Ratt-sounding riff to it, not totally unlike the riff in "Back For More" once it switches from acoustic to electric.  Another solid effort that is far superior to just about anything Pearcy has recorded outside of Ratt or Arcade.

Based on these three songs, I can say two things for sure.  First, I am very excited for Sucker Punch, as I think it will tide me over nicely until the new Ratt album comes out sometime in 2012 or 2013 (Pearcy says 2012 is to be devoted entirely to Ratt).  Secondly, if these songs were intended for Infestation, I think he does have a case when he says that these were stronger than the weakest material on that last Ratt album.  I would love to hear these three tracks given the full Ratt treatment.  As they stand, two of the three have a very strong 80's Ratt feel to them, and the other sounds like more recent Ratt, with all three being solid tracks.  Some minor production issues could easily be fixed before this album is released, but even if they are not adjusted, I will be all over this album like a Ratt on cheese, because if these three are any indication, Sucker Punch is going to be a great album.

Rating:  Tough to rate just three songs, but I would give each track a crankable 7 or 8 on their own merit, with only minor production issues I mentioned in the review.

Back To Review Index
Posted by arttieTHE1manparty at 11:46 AM