SAINTS OF THE UNDERGROUND "Love The Sin, Hate The Sinner" 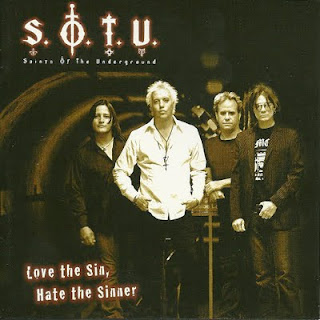 (c) 2008 Warrior Records﻿
Jani Lane--Vocals
Bobby Blotzer--Drums, Backing Vocals
Keri Kelli--Guitars, Backing Vocals
Robbie Crane--Bass, Backing Vocals
Additional Musicians:
Chuck Wright--Bass
Rick Flores--Keyboards
So-called "super groups" always have me a bit apprehensive.  Are they going to be anywhere near the quality of the members' other bands?  Is it going to turn into some sort of bloated, self-exploiting car wreck?  Will one of the members eventually kill another?  Or, will the "super group" label actually fit and the band will put out a solid product?  I mean, it has happened...HSAS and Contraband being a couple that spring to mind...it just doesn't happen often.
Saints Of The Underground is made up of Jani Lane (ex-Warrant...duh), Keri Kelli (ex-Alice Cooper, Ratt, LA Guns, Skid Row, Slash's Snakepit...and on and on...), Robbie Crane (Ratt), and Bobby Blotzer (Ratt), with contributions from Chuck Wright (Quiet Riot), and Rick Flores (ex-Mystic Cross, Stride), so I think that the qualifications for the "super group" label are fairly met.  Originally conceived by Blotzer as an outlet for music that he had written while away from Ratt, S.O.T.U. really came into being as a full-fledged project sometime in 2006 when he recruited Kelli to help him put his musical ideas together.  Lane, and then Crane, were also brought on board, but outside of doing a few gigs as a cover band, not much really came of it at first.  However, after it became obvious that the chemistry was there, they decided to go ahead and record this album to see where it led.
Where it led was straight to my CD player as soon as I found out about it, and it has made frequent return trips in the past couple of years.  This is a very good album that, while having elements of all the members' other bands, really sounds nothing like the members' other bands.  Oh sure, Jani Lane is going to sound like Jani Lane, but there are no songs that make you say, "oh yeah...that's a Ratt (or Warrant, or Alice...) song."  These are S.O.T.U. songs, period...well, with the exception of the Tom Petty song...and the Rolling Stones cover...oh, and the album closer, which I will get to in a bit.
The album kicks off with one of the best tracks here, the short-but-sweet rocker, "Dead Man's Shoes" which is the closest the band ever comes to what I think could have possibly also been a Warrant song.  That is rather unexpected, since this is also a song that Blotzer had previously written and recorded on his own solo project, Twenty4Seven with John Corabi handling the vocals.  Regardless, it is a good song and one that pretty much lets the listener know what to expect from the rest of the album.
The solid rock material continues with "Tomorrow Never Comes", "Good Times" and "Exit", all mid-to-up-tempo rockers, with "Good Times" being a fairly modern-sounding track complete with guitar effects.  The album's single "All In How You Wear It", is another good rocker, but something about it just seems a bit off to me; perhaps it is the angry style of delivery that Jani uses here.
The Petty cover is interesting, as this is easily one of his best known songs yet the band chooses to speed up and tweak just enough to update the song.  This is, of course, a risk as purists always get ticked off when bands alter beloved cover songs, but I think it works pretty well, especially the way Blotz tackles the drums and how Lane phrases the lyrics to fit the updated sound.  This is pretty high praise from an admitted non-Petty fan!
My personal favorites are both found on the last third of the album.  First is "Bruised" which features some frantic drumming from Blotzer and some pretty introspective lyrics from Lane.  The other fave would be "Jimmy", which a lot of Warrant fans will likely swear they have heard before.  That is because they have.  Warrant performed this song on-and-off for several years in the mid-to-late 1980's, but they never got around to recording it, so Jani took it upon himself to do so.  Stylistically, it easily could have come from Cherry Pie or possibly Dog Eat Dog, but it doesn't stick out like a sore thumb in this collection and the band does a good job of making it fit with the rest of the material.
Am I saying this is a perfect record?  Not at all.  I am not particularly enamored of the Stones cover, to be honest, as I don't really like the inclusion of a acoustic guitar-and-keyboard song on an othewise rocking album.  It's not a terrible song, but if you aren't a Stones fan (which I am not), this is just a ho-hum ballad that the disc could do without.  "Signs Of Life" is decent, but not write-home-about-it material, and, as I already mentioned, there is just something a bit off about "All In How You Wear It".  Still, considering the potential for disaster that a "super group" brings to the studio, I think this is a commendable effort and one that I found myself enjoying a great deal.  I hope that the band manages to find time to regroup and record some more music of this caliber.  Perhaps with Ratt back on hiatus, Blotzer and Crane can find the time to hook up with Kelli and Lane and give us S.O.T.U. round two!
Rating:  Crank this at a solid 7.
Back To Reviews Index
Posted by arttieTHE1manparty at 3:46 PM