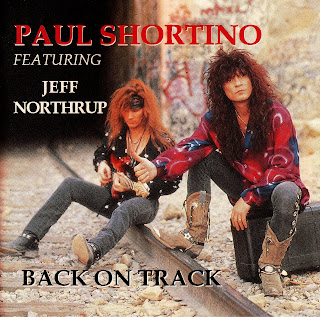 Who knew that when he was fronting Rough Cutt, Paul Shortino made so many friends?  Calling in favors from members of Great White, King Kobra, Dokken, and several other bands, Shortino and his friend Jeff "JK" Northrupp put together this excellent record, which would turn out to be the first of several collaborations between the two.  While rather difficult to find, as it is on a very small label, this gem in the rough is well worth tracking down if you are a fan of any of Shortino's work, past or present.
For a lot of people, Shortino is something of a poor-man's David Coverdale, and while I can understand the comparisons, I actually prefer Shortino's voice.  I was never a huge fan of most of his stuff with Rough Cutt, to be honest, as the musical style just never grabbed me; it wasn't terrible, just kind of "there".  However when he is given more of a chance to showcase what I feel to be his true style, which is a smokier, blusier style, Shortino really shines.  Nowhere is this more evident than on tracks like the mid-tempo, inspriational rocker, "Everybody Can Fly", or equally powerful "Rough Life".  Both songs not only showcase Shortino's vocal prowess but they also give Northrup the chance to really cut loose on some excellent, extended solo work that rivals anything he had done with King Kobra on the King Kobra III album.

There are several up-tempo numbers as well, with the best two being the album opener, "The Kid Is Back In Town", and the closer, "Where There's Smoke".  Again, these songs give Shortino a chance to stretch the vocal chords and for Northrup to show some flash and flair.  "Where There's Smoke" also incorporates several guest appearances which add a bit of flavor to the song.  "Give Me Love" is another excellent rocking number that has a bit of hook-and-groove to it, giving it a definite 80's sound despite the fact that this album was released almost half-way through the 90's.
The only real ballad on the disc is a strong one called "Forgotten Child".  Once again, Shortino's voice really works for this kind of number and the background vocals here really lend to the overall sound of this largely acoustic number.    "Pieces" teases you into thinking it is going to be a ballad with its into, but it turns into a full-fledged rocker with a monster of a solo embedded in the middle, so "Forgotten Child" is your only chance to take a breather during this rocking album.
For fans looking to hear Northrup really go off, check out the amazing instrumental, "Remember Me", which is roughly four minutes of nothing but emotional, soul-searing blues metal guitar at its best.  This track definitely deserves inclusion here and is a shoo-in to be included on any instrumental mix disc you might decide to burn for your own listening pleasure.  Killer, killer stuff here...
There are truly no weak songs here, and this disc really shows the musical kinship that Shortino and Northrup have when working with each other.  Thankfully, this is a partnership that sees multiple album releases as the more democratically named Shortino/Northrup.
Again, this is a very difficult album to find, but it is well worth the money if you do manage to score a copy.  I paid $20 for my import copy, only to find out the disc had been reissued in 2003 with bonus tracks on it (which I don't have).  Needless to say, I am working on finding that version now!
Rating:  An absolutely crank-able album!  8 is the minimum level for this disc!
Back To Reviews Index
Posted by arttieTHE1manparty at 12:31 PM