HELIX "Skin In The Game EP" 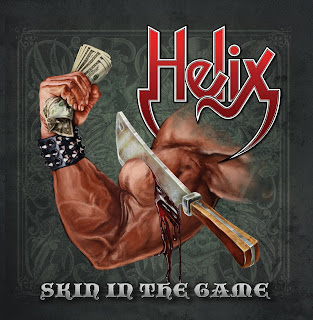 Okay, I have to admit, I have NO CLUE why Brian Vollmer decided to start out his latest Helix offering with the instrumental "William Tell Overture".  To say that it is a bit bizarre to start off ANY album with an instrumental, let alone an EP that only has five songs, would be an understatement.  However, this oddity perhaps best displays the fact that Vollmer and his band are still doing things their own way, traditions be damned.

Skin In The Game manages to reunite most of the commercially popular 1980's Helix line-up, as Vollmer is joined again by Brent Doerner, Daryl Fray, and Fritz Hinz, with newcomer Kaleb Duck playing second guitar.  As one might expect with this "classic" line-up in place, there is really nothing new that is done in these five tracks to make the listener wonder just who the heck they are listening to.  This EP sounds just like Helix, with Vollmer at times sounding a bit like Dee Snider of Twisted Sister fame, as per his usual sound.  There are no ballads to be found here, with all the songs being mid-to-uptempo rockers.  "Angelina" is the most polished sounding of the tracks here, lending a bit of a classic rock vibe to the effort, but still sounding at home among the rest of the grittier, gruffer sounding cuts.  "Champagne Communist" features some obvious keyboard elements not as present on other songs, and Vollmer backs off a bit on the edginess of his vocals, but even these elements don't detract from the overall classic Helix sound.

If anything, Skin In The Game sounds like it could be a few songs that were left over from the band's last effort, "Vagabond Bones", but I have read elsewhere that this is not the case.  This makes me wonder a bit about why a band with the back catalog of Helix would be releasing an EP at this stage of their career, but, then again, Helix have never really done things the way every other band has, so who am I to question their methods or motives.  Helix still sounds largely like Helix, so if you are a fan, you will likely enjoy this little disc; if not, don't waste your time or cash.

Rating:  Rock this at 6.5...there's nothing earthshaking here, nor is there anything legacy-eroding.

Return To Reviews Index
Posted by arttieTHE1manparty at 4:43 PM