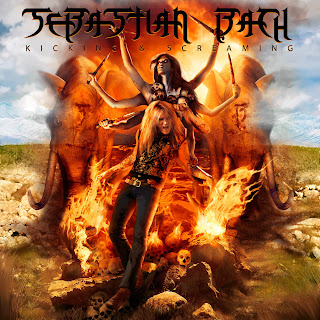 Many people hailed 2007's Angel Down as the return of Bas, although I don't know that he ever really left, to be honest.  Sure, his previous solo effort had been a live album of him covering himself as the lead vocalist of Skid Row, but he also did the very solid Frameshift album Absence Of Empathy, the somewhat under-the-radar DVD Forever Wild, and found himself on numerous tribute albums.  Oh, and there was also that stint starring in "Jesus Christ, Superstar" and several appearances on VH1 shows as a host of various hard rock and heavy metal countdowns.  Not exactly laying low....

If there was one knock on the Angel Down project, it would be that a lot of people felt Bas had abandoned singing in favor of a more screamed vocal style, and that is a fair assessment.  I think that this partly Bach feeling like he had something to prove and partly the fact that he still had a lot of anger and bitterness stored up inside of him, but I also think a lot of people forget that this was something he had been progressing toward as far back as the last Skid Row album.  He appears to be largely over whatever it was that motivated him to sing/scream in that manner, however, as Kicking And Screaming is far more in line with Slave To The Grind-era Sebastian Bach vocals...and it works incredibly well!  In fact, I dare say this is the album that both Bach and Skid Row have each been trying to record since the two camps went their separate ways, as neither has come even close to this performance level since that split.

What makes this album so special, aside from Bas's return to singing, is the introduction of the totally unknown Nick Sterling as guitarist and bassist for this album.  Folks, I don't know here this kid was hiding (and I do mean kid...he's not even half of Bach's 44 years old...), but I can tell you there are a LOT of bands that wish they had found him.  This kid is a whiz on both stringed instruments, with some killer leads and solos scattered throughout the disc, as well as solid rhythm and bass playing to really cement the songs together.  Bach would do well to keep this kid under some kind of contract for future recording efforts because Sterling is a truly gifted player that would seem to still have many years of musical growth and maturation that will supplement his already incredible talents.

As far as the songs go, several have a very Slave-ish feel to them, although with a more modern production sound.  "As Long As I Got The Music" is a prime example of this, and is one particular track where Sterling shines as well.  Other songs, such as the title track and "Tunnelvision" lean more in the modern rock direction while still retaining a strong sense of melody.  Wanting a power ballad or two?  "I'm Alive" fits that bill nicely, and while not a full-fledged lighter-hoister, "Dream Forever" is another slower number that allows Bach to showcase his talents.  "Wishin'" is another slower track that rounds out the disc really well.  For my money, however, Bach is at his best on the faster numbers here, with "One Good Reason", "Dance On Your Grave", and "Dirty Power" all being nice and aggressive while still retaining the types of hooks that sink into your skin and refuse to let go.

A couple of tracks miss ever-so-slightly, at least to me.  "Caught In A Dream" is one that comes to mind.  It isn't that it is a terrible song, and musically, it is actually one of my favorites, but something about Bas' delivery, especially on the chorus, bugs me.  This is the only song that the "whiney" side of Bach's vocals really rears its ugly head.  This has occasionally been a problem in his live performances, even going back to the Skid Row days, but rarely did it find its way onto an album.  This is one of those few times.  "Lost In The Night" is a song that I absolutely love...until the chorus.  This song is smoking, really chugging along...and then the chorus just seems to bog it down somehow.  Maybe more time with this track will change my mind, and by no means does it warrant skipping...I don't know...something about it just seems a bit off, at least for me right now.

There is no doubt this album will crack numerous people's top ten of 2011 lists, mine likely included; a top twenty slot is absolutely guaranteed.  It will be interesting to see if Skid Row attempts to pick up the gauntlet that Bach has thrown down here and step up with a comeback album of their own, but I highly doubt they will be able to come close to this album, as Kicking And Screaming is extremely solid, very entertaining, and full of attitude...something both acts have been missing since saying a not-so-nice goodbye to each other.

Rating:  Crank this baby to 9.

Back To Reviews Index
Posted by arttieTHE1manparty at 7:37 PM