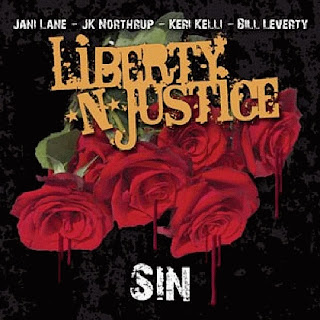 Sadly, the hair metal world lost a vocal icon with the passing of Jani Lane just a few weeks ago. With this song, Liberty N' Justce has released the last known full-studio recording by Lane...and it is an incredible song. Released on iTunes, this song will eventually be part of LnJ's Cigar Chronicles release in 2012, but fans of Lane, and of LnJ, can enjoy this truly amazing song now. A heartfelt ballad filled with excellent guitarwork, the lyrics to "Sin", much like those of "My Addiction", Lane's previous effort with LnJ, seems to really fit what everyone felt about the singer: he was a flawed individual with many demons and sins, but that he was trying to find his way through the haze his life appeared to be so many times. Lane co-wrote the song, along with Northrup, Murr, Kelli, and Scott Bolan, and a portion of the sales of the track will go to charity in the name of Jani Lane.

Warrant fans, Jani Lane fans, Liberty N' Justice fans, and fans of great hard rock will not want to miss this song at such a bargain price. Stop reading and go download it now...


Back To Reviews Index
Posted by arttieTHE1manparty at 9:39 PM