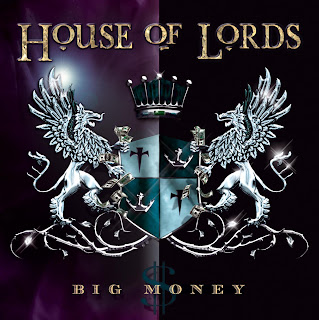 House Of Lords does very little to surprise anyone whenever they put out a new album.  In fact, the biggest curiousity on an HoL album is who is going to be in the band other than quite possibly the most-underrated vocalist in the hard rock/AOR/melodic metal genre, James Christian.  If you pick up a House Of Lords album you expect strong vocals, above average-to-excellent songwriting, top-notch guitars, and a handful of truly memorable songs.  Big Money is not an exception on any of these fronts, as this is a very strong effort from one of the few bands of the 1980's/early 1990's who still sound almost EXACTLY the same now as they did then.

While I don't particularly care for the intro to the title track, the rest of the song is solid and a good indication of where this album will go, with a driving, up-tempo rhythm, powerful lead vocals, a great little guitar solo, and big, layered choruses.  Track two, "One Man Down" is easily one of my favorites, as it segues from an intro section that will remind many of "Can't Find My Way Home" into a blatantly Zeppelin-esque guitar riff and vibe that carries the last 2/3 of the track.  Killer, killer song, especially considering I am an openly non-fan of Led Zeppelin for the most part.  Elsewhere, songs like "First To Cry", "Seven", and "Run For Your Life" are just like an old, favorite sweatshirt:  incredibly comfortable, well-broken in and perfectly fitting, and so familiar you smile everytime you put it on...you just know this is what you came for when you pulled it out of the closet.  These songs are so purely House Of Lords that, if you are like me, you will feel like you have heard them before while at the same time grinning from ear-to-ear at the thrill of such great new music coming from a band you have loved for so long.

The band does experiment a little bit, with a song like "Hologram" using some minor vocal effects and layering on the chorus, for example, but not to such a degree that you start to wonder if you are listening to an entirely different band.  "First To Cry" is a bit more radio-friendly than many are used to hearing from HoL, but again it is not an annoyance, and the listener likely won't feel like this is a sell-out attempt so much as it is an attempt to tone down the "bigness" of the typical House Of Lords song.

Christian is at the top of his game here, and never do I hear even a slight indication that he is struggling with his range or in maintaining his pitch and timbre.  Unlike David Coverdale, for example, who while still vocally powerful yet obviously not as rangey as he once was, Christian is able to reach the highs and scrape the lows that he has always used.

Jimi Bell is an excellent addition to this studio-version of the band (I have no idea who will play live), and he is given multiple opportunities to shine on Big Money.  "Run For Your Life" has a great solo right before the closing chorus that gives him a chance to stretch the strings a bit.  "Seven" features another great solo, but nowhere is his influence on the album's sound more prominent than on the previously-gushed about song "One Man Down".  Excellent axework has always been a hallmark of  House Of Lords' albums, and Bell steps boldly into the shoes of the band's previous guitar heroes and meets or exceeds expectations at every turn.

This is not to say that this album is 100% without its flaws.  For one, it is a little bit odd to me that the bass is so low in the mix here, which leaves some songs missing a bit of punch.  Typically, Frontiers Records is known for solid production and mixing on its albums, but this one seems just a slight bit off.  It is not something that destroys any one song, but I think that hearing these songs live would really give a person a better idea of what Christian likely was hearing in his head, as the bass is typically more upfrong in the live setting.  Additionally, there are a couple of tracks where the keys are a bit more "in your face" than they have been at any time since Greg Giuffria left the band.  "Someday When" is a prime example of this.  Again, it is not a terrible song, and the keyboards don't kill it off, but they do very nearly overpower the guitar here, especially with the subdued bass lines.

Overall, this is yet again another extremely solid effort from House Of Lords, and I expect that Big Money will find its way onto many year-end Top 10 lists, mine included.  Just how high it finishes will be largely influenced by what comes out in the last quarter of the year and just how highly releases from King Kobra, Night Ranger, Journey, Sebastian Bach, and a handful of others are ranked.

Back To Reviews Index
Posted by arttieTHE1manparty at 4:17 PM