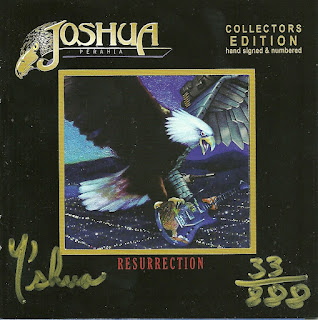 Guitar virtuoso, Joshua Perahia, returns with his first album in over a decade with Resurrection, a nearly flawless record that combines power metal, melodic metal, and AOR into one smoking package!  There are going to be numerous comparisons to Yngwie Malmsteen's early work, which is made seemingly even more inevitable since former Malmsteen vocalist, Mark Boals, handles microphone duty on this album as well.
Despite the fact that he has released several albums over the years, it is not uncommon for most people to immediately reference his 1988 album, Intense Defense, when talking about this talented musician's work.  In a lot of ways, Resurrection sounds like it could have been the logical follow-up to that masterpiece, as many of the same styles and tones are incorporated in this new album.  In fact, if you are one of the 888 people who ordered a copy of this album in Collector's Edition form (mine is number 33), you get to hear a bonus track, "Secrets", which was actually recorded for the Intense Defense album, and features Rob Rock on vocals (more on that in a bit).  A couple of other songs sound like they could have fit well on that classic album, as well, including the AOR-leaning trio of "Divine Intervention", "Voice Of Reason", and "Live Out A Lie".  "Promises" also has a very distinct 80's feel to it, although in more of a metallic, less-AOR fashion.  However, as good as these songs are, to me they are not the strength of the album.  That distinction falls on the heavier, more purely guitar-driven tracks that are sprinkled throughout this album.

Fans of heavier, more power metal-styled material are going to instantly salivate over "Blood On The Nile", especially the album cut as opposed to the single version which is also included in this collection.  "World At War" may be my favorite track here and is likely the heaviest on this disc, as well, with Boals really adding an edge to his voice that works well to convey the angst and urgency of the message incorporated in the song.  "Darkside Of Man" will also cater to the power metal crowd with its huge guitar riffs and some of the best drumming on the album.
The inclusion of Boals on vocals gives Perahia the opportunity to explore some more blues-based material on this album, also.  Nowhere is this more apparent or effective than on the gritty, heavy blues of "Behind The Walls" or "Miracles", both of which are among the very best songs on an album full of excellent material.  I, personally, could listen to an entire Joshua record of nothing but this style of hard, heavy rock, and be thoroughly satisfied, even if Perahia never completely let loose the blazing speed that he is often noted for.

There are a couple of lesser moments for me...not bad, just not the same high-quality material as the rest of the disc.  The almost praise-and-worship style of "Sing Hallelujah" doesn't really fit the flow of the rest of the album, and I think most people could have done with just one version of "Blood On The Nile", with the full album version (almost two full minutes longer) being the preferred version for me.  Of course, the radio edit is only found on this Collector's Edition, so I shouldn't complain...I actually paid extra for it!  I am also a bit suprised that I am writing this, but the little instrumental, "Where Eagles Fly", while nice, doesn't really do much for the overall feel of the album, although it does give the listener a chance to hear this project's keyboard player, Scott Warren, take a moment in the spotlight without Perahia's prodigious talent overshadowing him.  (Good for you, Scott!  Take a short bow...but pardon me if I skip this track most of the time...).

As to the Collector's Edition version of this project, purchasers are treated to bonus tracks, "Dirty Games" and "Secrets" on this special edition, and both are nice glances at the past of the band.  "Secrets" was recorded during the Intense Defense sessions and features Rob Rock on vocals.  "Dirty Games" was recorded in 1991 and features that incarnation of the band, with, I believe,  Robyn Kyle Basuri of Red Sea fame, on vocals.  Both of these are excellent songs of suprisingly good quality, especially considering both are LIVE REHEARSAL RECORDINGS with no overdubs or edits!  Both fit the overall feel of this project fairly well, especially the more AOR-styled material here, and are welcome additions, in my opinion.

If you ordered this special Collector's Edition, you are treated to an autographed CD, a hand-numbered and autographed die-cut cover (which frames the standard-edition cover), and a separate "thank you" type of card which has a Resurrection guitar pick affixed to it.  Pretty cool stuff for just a few additional dollars...or at least the collector in me says so!  Full credits, song lengths, and lyrics for the songs found on both editions are included here, and I am guessing that the full band photo found on the Collector's Edition is unique to this set as it is part of the die-cut cover I mentioned earlier.  Very cool, very professional packaging!  The only things I wish were included were the lyrics to the bonus tracks and the band line-ups for "Dirty Games" and "Secrets".

Regardless of the version you manage to get ahold of, one thing that is consistent OUTSIDE of the excellent musicianship is the lyrical message being delivered.  Perahia is a devout Christian and has always incorporated his faith in his lyrics, and the lyrics on Resurrection are not an exception.  With the exception of the previously mentioned praise-and-worship stylings of "Sing Hallelujah", however, the lyrics are never preachy or beat-you-over-the-head in their approach. Instead, Perahia uses various type of imagry to paint a portrait of his faith and beliefs and encourages the listener to seek out the Truth for themselves.  No one should find themselves offended by the words Boals sings over the music performed by Joshua and his bandmates.

All in all, an excellent return from a man, and project, that really has spent too much time away from the hard rock/heavy metal scene.  Let's hope that Joshua and Company return to the studio much sooner than this last time and don't make us wait another decade before unleashing an album of this quality!

Back To Reviews Index
Posted by arttieTHE1manparty at 12:10 PM