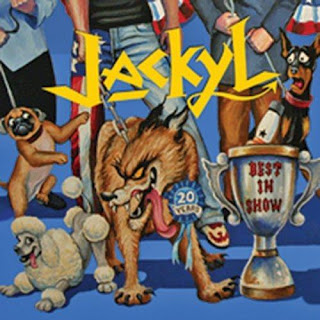 
Like a lot of people, I am sure, when I saw the title to the new Jackyl CD, I thought it was a greatest hits disc.  While technically that is not correct, I can't say that it is completely wrong, either, as this may very well be the best album Jackyl has put out in at least fifteen years, if not their entire career!  Part of this, I feel, stems from the fact that this line-up of the band has been together since 1998, giving the current line-up more time playing together than any version of the band's history.  As such, there is a tightness, a cohesion, in the performance of the songs, that is not always present when bands are constantly shifting members.  Of course, as has always been the case with Jackyl, it's the attitude of the songs that really drives the band, and Best In Show is no different in that respect.  Numerous songs on this fun raunch-fest are sure to find their way into live sets, onto iPods, and onto personal "best of" compilations, finding a home next to "Down On Me", "When Will It Rain", "Locked And Loaded", and "The Lumberjack" in a smooth, seamless fashion.  There is never a doubt that this is Jackyl....

Jackyl has come back full-force, picking up where they left off with the very good When Moonshine And Dynamite Collide from 2010, and adding in even more grit, more balls, and all the sleaze and innuendo that has made whatever version of the band that Jesse James Dupree puts together an absolute blast to listen to!
From the very start of the album, it is apparent that Jackyl is here to rock your face off, and that attitude continues throughout most of the disc.  Whether it's the guitar work on Jeff Worley on the opening title track, or the thunderous bass playing of Glick, which is especially evident on the jaunty "Encore (It Makes My Bic Dig Her)", Jackyl proves that there is more to the band than a chainsaw and some humorously tongue-in-cheek sexual innuendo-laden lyrics, although there are plenty of those, as well.  I mean, who else but Jackyl would even attempt to write a song with the lyrics "I like poontang better than chicken" ("Better Than Chicken") or compose a song today that is all about extolling the virtues of a particular stripper ("Encore")?  Answer?  No one...at least not the way that Jackly does it.

Oh...and yes, the chainsaw does show up in the excellent version of "Cover Of The Rolling Stone", complete with a "stomp-stomp-clap" rhythm section that Queen would have sworn was lifted straight off of "We Will Rock You".  While many people have attempted to tackle this relatively simple song, few have done so with any degree of success, and while I thought Poison did a credible job on their Crack A Smile album, their version misses the mark when compared to Jackyl's take.

The band makes no attempt to update or alter their sound at all, which is refreshing, but that does not mean there is no growth on this album.  A perfect example of this is the track, "Walk My Mile", which has a bluesier feel than what most people are going to typically associate with Jackyl, but at no time does this song feel like it doesn't fit this set.  It's darker and angrier in tone than anything else in the band's catalog, and yet the listener will still find a comfort level here that will have him or her nodding along to the groove as they not along to the concept of the lyrics as well.  Jeff Worley's guitar work on this track is stellar and really adds a soulful feel, and Jesse cranks up the soul as well, but at no time is there any doubt as to who is singing this track.

There is also a slower moment or two on the track, but they are more mid-tempo southern rock in nature than true ballad material.  The best example of this is "Don't Lay Down On Me", which is a great ode to friendships and love, that is, again, probably more lyrically mature than much of what people are going to associate with Dupree and his gang.  They make it work, however, and at no time did my finger even flinch toward the skip button.

Always looking to shake things up a bit, Jackyl closes out this album with a hidden track, choosing to update the Run-DMC rap classic, "It's Tricky".  Before you cringe, I have to tell you that you really should give it a listen.  Not only do they add a couple of lyrical lines themselves, you can hear the grin that is plastered on the faces of these guys as they rock their way through this odd cover choice.

Stand out cuts are difficult to pin down, as there are no real off numbers here.  My personal favorites would be "Eleven", "Horns Up", the title track, "Walk My Mile", and "Screw Driver".  If I HAD to pick a song that doesn't work as well for me, I guess it would have to be "Golden Spookytooth" which just never grabs me for some reason.  Other than that very minor hiccup, however, this album is pretty much flawless, and, as I stated in the opening paragraph, quite possibly the best, most complete album in the band's 20 year history.  Here's to 20 more years from this seemingly tireless band, as Best In Show is definitely a mid-year contender for Album Of The Year here at Glitter2Gutter...even if it does come in the dreaded digi-pack!!!


Rating:  Crank this slab of southern sleaze to a killer 9!

Posted by arttieTHE1manparty at 10:51 AM