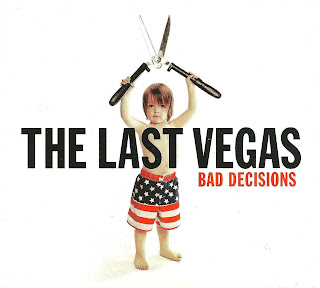 (c) 2012 FrostByte Media/eOne Entertainment
Chad Cherry--Vocals
Nate Arling--Drums
Johnny Wator--Guitars
Danny Smash--Bass
Adam Arling--Guitars
Chicago's The Last Vegas has returned with their most ambitious, cohesive set to date in Bad Decisions.  Picking up where they left off with 2009's Whatever Gets You Off, The Last Vegas beefs up the sound on this one, but they don't alter who they are.  Combining definite 1970's hard rock overtones with a modern take on the sleaze style, The Last Vegas continue to impress with their songwriting abilities, their musical performances, and their overall recorded sound despite not receiving backing from a major label.

For me, the major improvement on Bad Decisions is the overall songwriting and delivery.  In the past, albums by The Last Vegas typically consisted of about 4-6 really strong songs with a handful of lesser tracks that were propped up by the attitude and style of the performances. While that attitude is still present, the songs don't need to be salvaged any longer; the lesser tracks have been weeded out for the most part and we are treated to (mostly) nothing but top-shelf songs.  There are several stand-out tracks for me, including the single "Evil Eyes", which is easily the most modern sounding cut which Cherry states in concert is "about his hobby of voyeurism".  Other outstanding cuts would include "She's My Confusion", the crushing, riff-driven album opener, "Beat To Hell", the Aerosmith-inspired "Other Side", and the title track, "Bad Decisions".  "Leonida" has a definite 70's swagger to it that most fans will find instantly catchy, and "It Ain't Easy" has a groove and sound that you will swear you have heard before but can't quite place.

The only song on the disc that misses at all for me is the closing ballad, "Good Night".  Perhaps I have just come to expect my Last Vegas music to have me bobbing my head/tapping my toes/pounding on my steering wheel, and this slow album closer just doesn't do much for me at all.  The performance is not the issue...I just don't care for the track.  Maybe that will change with time.

Cherry's vocals are as unique and pronounced as ever, but there is a bit more attitude to the delivery this time around, even if the production on the album has taken a bit of the rawness out.  He continues to slip between a higher, almost Tom Keifer-like rasp and a bottom end that reminds me quite a bit of Axl's lower range. The guitar tandem of Wator and Adam Arling is tight and feeds off of each other, which is especially noticable in a live setting.  Whether riffing through the rhythm guitar parts or tearing into some quick and tasty leads, the guitars are definitely a plus for this band, especially in a musical world that seems satisified with sub-par axework most of the time.  As always, the rhythm section of Nate Arling and Danny Smash really delivers throughout, pummeling the bottom end of each of these tracks.

Really, there is very little to not like about this album, in my opinion, even down to how the album was made and released. The production is crisp with all of the instruments easily discernable from each other and no one buried in the mix. The packaging, despite being a dreaded digi-pack, is upper-tier with multiple full-color photos, full lyrics, wiritng credits, contact listings, etc. 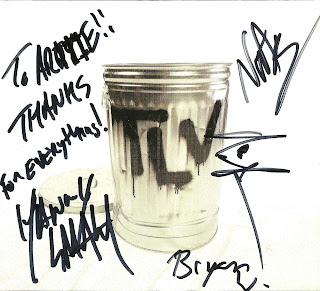 ﻿
As you can see, my copy was autographed (yeah they misspelled my name and had to write over it!!!) when I was fortunate enough to meet the band when they performed at Sculley's Shooters in North Platte, NE on Sept. 7, 2012.
﻿
As of this review, Bad Decisions has only been out for a couple of weeks, so if you have not yet had a chance to track down a copy, by all means DO SO, either from the band's own site (www.thelastvegas.com ) or from any number of on-line outlets, including Amazon and iTunes.
Rating:  Crank this one up folks, setting the dial to a healthy 9!
Back To Reviews Index
Posted by arttieTHE1manparty at 4:26 PM