WAYLAND "Welcome To My Head" 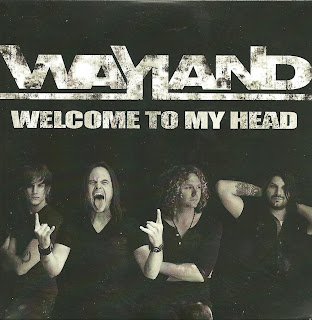 (c) 2012 Ironworks Music
Mitch Arnold--Vocals
Phillip Vilenski--Guitars
Tyler Coburn--Drums
Dean Pizzazz--Bass
Named after their hometown, Wayland is a modern hard rock band that throws a definite nod to the past.  But we aren't talking the 90's or even the 80's here.  Wayland seems to be more infused by the 1970's southern rock sound than anything, as is evidenced throughout this little teaser of an EP.  If I had to pin the sound down further, I would say you could almost label Wayland as a heavier Black Crowes in their approach, but that isn't entirely accurate, either, as Wayland carries enough of a modern take to their sound that they really don't sound like anyone in particular.  You just know where their sound is coming from when you hear it.
Each of the four songs presented here are just a bit different in approach from each other, but all fit together well.  Does that make sense?  Whether it is the current modern hard rock radio single "Welcome To My Head", the more commercial sounding melodic rock of "On My Knees", or the guitar-driven, classic AC/DC styled "Nobody's Perfect", each track has it's own identity.  In the end, however, Arnold's powerful vocals, and the band's workman-like approach to their music, mixed in with that southern rock swagger I mentioned, brings everything back together on an all-too-short EP that is almost cruel in the way it teases and tempts the listener.  I have left this EP playing on repeat for multiple listens both out of enjoyment and frustration as I keep hoping there will be a hidden track I have missed somewhere!
Packaged in a simple cardboard slipcase, there are no notes, no lyrics, and I had to hunt down the band members names on-line, but there is a lot going on inside, and that is really what counts, right?  I just hope that the next time these guys decide to send me something, they send MORE!!!
Rating:  Crank this little temptress up to 7.5!
Back To Reviews Index
﻿
Posted by arttieTHE1manparty at 4:47 PM