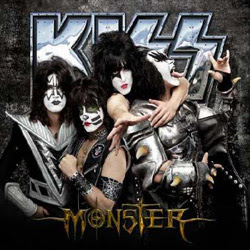 Paul or Gene?  Gene or Paul?  Basically, your opinion of KISS and their albums largely comes down to your preference of lead singers (although everyone takes a turn at the main mic on this disc), and the different styles of songs the two generally bring to the project.  Monster is no different.  Following up the surprisingly successful Sonic Boom from 2009, we are again treated to a mixture of Paul's more polished, fuller-sounding anthemic hard rock and Gene's generally more stripped-down three-chord rumblers.  Personally, I have always fallen into the camp of the Starchild, as Paul's music, whether as a solo artist or on his contributions to KISS, tends to grab my attention more, whereas so much of Gene's material tends to sound the same to me...not always, but quite frequently.  Monster is not any different, at least for me, but there are a couple of nice little surprises that make this an above average listen for rock fans, KISS Army members or not.

For me, the easiest way to break down this album is to split it up by singers, so that is the approach I will use here.  And, since I've already admitted to being more of a Paul fan than Gene (or anyone else), I will start off where the album starts...with Paul in the lead.

Things kick off with what I consider to be one of the band's strongest songs since the 1992 comeback classic Revenge album.  "Hell Or Hallelujah", which was also written by Paul, is superior to anything from Sonic Boom, and is a logical followup to that disc's dominant moment, "Modern Day Delilah".  Kicking off with a catchy guitar riff and a driving tempo, this track features the much higher, more controlled vocals of Paul on all of the lead parts, with Gene snarling his backing contributions in classic KISS fashion, giving the song a classic-KISS-meets-Revenge feel, complete with a very Ace-ish solo, handled nicely by Mr. Tommy Thayer.  "Freak" is another excellent Paul-fronted contribution, although this track received a co-write from Thayer.  Once again, fuller production, a screaming guitar solo, and some spot-on vocals drive this uptempo rocker that sounds to me like it might have fit well on the Psycho Circus album, again mixing a classic feel with the heavier sounds the more recent offerings have provided.  To me, songs like this and "Hell Or Hallelujah" are when KISS are at their best, and I would love to hear an entire album of exactly this type of material.  "Shout Mercy" is a definite throwback attempt, and the guitar riff sounds comfortably classic, mixing well with the majority of the material the band put out in their 70's hey day.  Once again, this song features the perfect mix of Paul on lead vocals and Gene on the backing tracks, with yet again another solid solo provided by the talented Thayer.  (Allow me to jump out of the Paul portion of this review to mention that, for the most part, Thayer has contributed the best guitar tracks on a KISS album in MANY years!  His playing here is just superb and worth noting in virtually every instance!)  Not every Paul cut is an absolute killer here, as I think "Long Way Down" gets a little plodding and is missing a bit of the oomph of the rest of his material on Monster.  "Last Chance" ends the album on a solid note, although it is a bit cliche feeling in it's approach and is not the best of the Paul tracks by any means.  Once again, this song sounds like it could have come from the Psycho Circus writing sessions...and once again, Tommy Thayer treats listeners to a great solo that will have air-guitars in full force after a couple of listens.

Gene's tracks, in most instances, actually pleasantly took me by surprise. "Wall Of Sound" is crunchy in all the right places, and doesn't slip into the mind-numbing, plodding rhythm of so many of his past contributions.  Perhaps this is due to Paul's contribution as the album's producer, or perhaps Gene just found a bit of his 70's youth in one of his songwriting pens, because this is one of Gene's finest moments in many albums.  "Back To The Stone Age" is full of lyrical cliche and cheese, but it succeeds by keeping the tempo truly upbeat, with Gene's bass thumping along on the bottom end and Singer's drums crashing away at a solid clip, not allowing the track to bog down.  As with "Wall Of Sound", this is, at least musically, one of the better Gene tracks in quite some time.  "Eat Your Heart Out" is another very solid Simmons number (again with a great Thayer guitar solo) that has both a classic feel and a more modern production feel.  The really interesting thing about this track is the vocal intro, which has a DEFINITE classic sound, although it isn't necessarily a classic KISS sound (you need to give it a listen to appreciate what I mean here).  Again, this song does a good job of not slipping into slow-end mid-tempo range, as so many Gene songs have done in the past, and the Demon has crafted a song that will slide into a current set-list right alongside so many of the band's classics.  "The Devil Is Me", however, is one of those tracks I keep alluding to, with Gene slowing the pace too much, dropping his vocals to the bottom end of their range, and churning out a three-chord rocker that sounds like it might have been left on the Creatures Of The Night editing floor.  You've heard this song a dozen different times, just with different lyrics and a different title, although, once again, Thayer's guitar work saves the song enough that I don't just hit the skip button right away.

There is one trade-off track here, "Take Me Down Below", and it works pretty well here with Paul and Gene each tackling a verse.  Again, this is the kind of material that I really used to wait for on the older KISS records, because I always thought it was so unique to have a band that not only had two (or more) lead singers, but also utilized them in the same song.  Not the best song here, but certainly not the worst, this is one that may have more listeners than just me waxing nostalgic.

As to the other two songs, which feature Eric and Tommy on vocals, both are performed well, but my take on them is completely different.  WhenEric Singer gets his turn on the microphone with a Paul written track called "All For The Love Of Rock & Roll", it is one of the true high points of this album.  Again containing a classic KISS riff and feel, this mid-tempo groover is one that I can imagine will find its way onto future KISS compilations and could definitely gain significant airplay on classic rock stations that also mix in classic bands' new material.


Despite all of the glowing work contributed by Thayer on guitar, his moment in the spotlight as a vocalist is NOT the high point of this disc.  Now, let me clarify a bit; it's not that "Outta This World" is a horrible song.  It just sounds to me like Paul and Gene sat him down and said make this song sound as much like "New York Groove"-era Ace Frehley as  possible, and be totally unapologetic about it, which is what Thayer does here.  I realize that Stanley wrote this song, but blatant isn't a strong enough word to describe how much this feels like a rip-off in nearly every facet.  Even Thayer's vocal approach is similar to that of Ace.  Thayer's skill is evident, and the song is played with conviction by all parties here, but I just can't get over the shameful way it seems this song is directed at Ace (even the lyrics take a swipe at Frehley's "Space Ace" theme...).  It's one thing to have Thayer dress like Ace, and one thing to have him ape his solos as closely as possible (for which there is at least some understandable need), but to do something like this is difficult for me to swallow completely without a bitter taste being left behind.

The packaging, as you would likely expect, is top-notch.  Full lyrics, multiple full-color pictures, and full album credits are included in this 20 page booklet.  There is also a deluxe edition of this album which comes with a 64-page book that I have heard has even more photos as well as interviews and other KISS goodies, which is a nod to the marketing savvy of Gene, I am sure.

In the end...look, either you like KISS or you don't, and within that you are likely either a Paul or Gene fan.  No matter your standing in the latter part, you are going to find something you really like, and maybe a moment or two that leave you wanting...but isn't that they way with pretty much everything KISS has ever done?  I've read several other reviews on-line, and I have to say I am (so far) the only person who is going to make this statement:  I definitely prefer Monster to Sonic Boom, and it is leaps and bounds better than the very spotty Psycho Circus.  The best moment in KISS-tory?  Nope.  It is, however, the best thing the band has released in at least 20 years, at least to these ears.

Rating:  You can't just average the Gene and Paul ratings, because that skips over the significant guitar contributions of Thayer and the above average performance vocally and on drums from Singer.  I guess time will tell if some of the polish is knocked off this effort from a nearly 40 year old rock-n-roll machine, but for now, Monster earns a Crankability rating of 7.5.