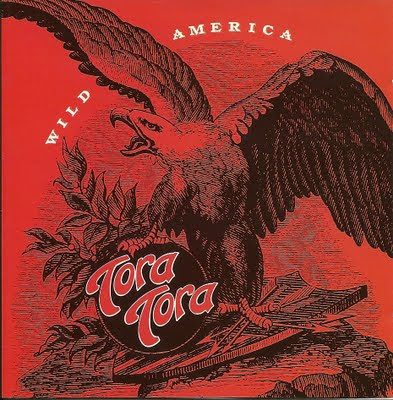 On this, Tora Tora's sophomore album, the band continued with their blues-tinged hard rock...all for not.  I say this because 1992 was, for most readers of this blog, I suspect, the year the music died, and Tora Tora was lost in the shuffle.  Too bad because this is an excellent album that stepped up a bit from their debut yet remained filled with both solid rockers and a couple of top-notch ballads, all of which could have been hit material for radio and MTV had either format cared about the hair bands of the 80's that were still bringing it in the early 90's.

As it is, Wild America is my favorite of the Tora Tora albums that have been released, as Corder's vocals really showed a depth that was not always present on the Surprise Attack! album from 1989.  Sure, "Phantom Rider" was a great tune on that first disc, but this album has several songs that are every bit as good as that classic cut...it's just that not nearly as many people have heard these songs.  Also, the guys decided to let some of the "metal"in their "hair metal" sound slip away, settling instead for a sound that has more in common with Cinderella, Tesla, Tangier, and some of the other more blues-based hard rockers of the time.  For evidence of this, check out the following video for the phenomenal mid-tempo number, "Faith Healer".


For those who were fond of the style the band used on "Walkin' Shoes" from Surprise Attack!, the shuffling rocker "Amnesia" should be right up their alley, as this song truly sounds like it could be the younger brother of "...Shoes".  Francis is especially present on this number as his bass line is the dominant feature here, but Douglas slides right in with a tasty little solo as well, lest you forget the talent this underappreciated guitar player wielded.

Other top of the heap numbers would include the Memphis blues-soaked "Dead Man's Hand", the hard-driving, thumping title track, the more stripped-down "Nowhere To Go But Down" (which also features some nice mandolin work), and the balls-out, rolicking "City Of Kings", which is quite possibly the hardest number the band ever released and, most likely, would have propelled the band's debut album even further had this song been included on that album.  "Lay Your Money Down" is another stand-out track on an album that really has no bad songs, as is "Dirty Secrets".   As far as ballads go, "As Time Goes By" is as good as it gets, as the pomp of the power ballad is left behind and the emotion of the song is allowed to shine through.

Some twenty years after the fact, this is still an album that I pull out with a good deal of regularity and is one that should be given second life by anyone who may have filed it away.  If you haven't had the chance to hear this gem yet, it can usually be found for about the same cost as a footlong sandwich from Subway, so feed your ears with your next five dollar bill and see if you don't agree that this is one album that truly missed its shot at greatness due to the grunge virus that killed off so many great bands.

Rating:  Even after 20 years, this album is still crank-worthy!  An unhearalded classic worthy of a solid 8.5!  I truly love this record!

Posted by arttieTHE1manparty at 12:56 AM