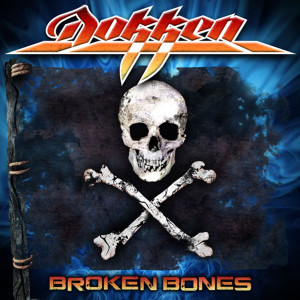 This is 2012, not 1987, folks.  25 years and seven studio albums separate what most will say was the last, true Dokken classic, Back For The Attack, (I disagree, as I think Lightning Strikes Again is a classic Dokken record!) and this latest effort, Broken Bones.  Things have changed, both internally and in the music industry, but Don Dokken continues to forge on, whether for the good or the bad, still working to release quality melodic hard rock in a world...or at least in an America...that constantly turns its back on such sounds.  He can't hit the high notes like he once could, George Lynch is long gone, and a lot of the songs here are far more personal and introspective than the anthems of the past, but when Broken Bones is at its best, it is a very good record.  Can it sustain those high moments, though?  That is really what the main question about Broken Bones turns out to be.

Things start off in very promising fashion, as "Empire" is a full-throttle rocker that finds the band in fine form, with Don stretching his vocals about as far as they will apparently go now, and Levin absolutely ripping through an awesome solo that has me immediately comparing it to Lightning Strikes Again and  Erase The Slate's hardest moments.  "Broken Bones" continues in the hard-hitting vein, albeit easing off the gas pedal just a bit, but it still sounds for the most part like classic-era Dokken, especially in the way the chorus is delivered, and should leave most fans of the band anxiously awaiting the next track.  "Best Of Me" took me a few listens to really get into, but, once again, it is a solid track and we have a nice trifecta going to start the disc, and "Blind", while not necessarily leaping into "classic" status for this band, is certainly a better-than-average track that I like quite a bit after giving it some time to grow on me.  Four-for-four as far as rockers to start the album...that's a pretty solid average and I'm thinking we have a potential sleeper for Top 12 of 2012 here.

Then things hit a bump...and it's a pretty hefty sized bump, by the way....

"Waterfall" starts a somewhat downward trend, especially as far as tempo goes.  Levin has a cool solo in this song, but the track as a whole really goes nowhere for me.  It feels like the band couldn't decide if they wanted a ballad or not, so they bumped it up just a notch and gave us a kind of blah tempo that really drags things down for me.  Then comes "Victim Of The Crime", which my wife referred to as "hippie-drippy crap".  While I don't know that I would go that far, it is definitely an odd song that sounds more like the New Agish rock Don experimented with on Long Way Home a few years back.  Not my thing at all.

Just when I was starting to think about writing off the album overall, "Burning Tears" hit and I was back in "pretty impressed" mode.  Again, Levin's acrobatics really contribute to this uptempo rocker that just seems to continually build and build until it hits anthem mode, which I love.  It's a toss-up as to whether "Burning Tears" or "Empire" is the best song on the disc, by the way (and one more near the end throws its hat into the ring, as well...).

My hope for this record was just about flattened, however, with "Today".  Now, if this track had been served up on Don's acoustic solo disc from a couple years back, that would have been one thing...but it doesn't belong here AT ALL!  Seriously, after two listens I've had all I need of this boring, semi-acoustic, trying-to-hard-to-be-happy but still sounding depressed number.  If it seems I don't like it, well, then I guess my description is working...

"For The Last Time" brings the disc back to life in a big way, again delivering one of those classic-feeling Dokken anthems, but in a more modern version.  Levin is in top form here and Mick Brown sounds better on this track, more alive, than he does anywhere else.  Easily top three as far as songs go here, this is another one of those songs that I am sure will find its way into any "best of" Dokken compilation I decide to put together and I would imagine it will be a killer number in a live set.

"Fade Away" is the one track where I felt like the band made a legitimate attempt to reach into the past, and they almost pull it off.  It tries really hard to be a classic Dokken ballad, but it falls short, leaving the listener feeling like they came THIS CLOSE to hearing a great song, only to be left a little empty.  At times it reminds me of "Unchain The Night" off of Under Lock And Key, especially on the guitar riff, and at others is feels a bit like "Burning Like A Flame" from Back For The Attack.  But something is missing that keeps it from reaching classic greatness:  Jeff Pilson.  I'm not talking about his bass playing, but rather his backing vocals.  This is a perfect example of a time when the vocal harmonies of Pilson are sorely missed, as I think they would have possibly been enough to put this song over the top.  As it is, Levin nearly makes it great, but just not quite.  Definitely not a skipper, and perhaps it will grow on me even more with time and repeated listens, but fans who were hoping for a full-on classic are likely to feel a bit jilted, maybe even teased, and let down, albeit fairly gently.

"Tonight" is a decent closer, again reaching for that classic Dokken sound but just missing by a fraction of an inch.  That being said, I would take a hundred "Tonight's" or "Fade Away's" over some of the cookie-cutter rock that clutters the airwaves of rock radio today.  There is at least some grit and soul to a track like this, along with yet another superb effort by Mr. Levin as well as solid contributions from Brown and McNabb.  Speaking of McNabb, it is worth mentioning that he does a more than credible job throughout the record, doing his part by keeping the songs moving along (at least when he's allowed to), but never threatening to overstep his bounds.

And then there's Levin.  I was texting a friend about this album the other day, and as I told him then, I have to say that the more I listen to Broken Bones, the more I am convinced that it is Levin's guitar that is the lead vocalist on this album, not Don Dokken.  While I absolutely don't hate Don's vocals here (although, as I pointed out, they do sound strained at times), I simply can't get over how much Levin has taken the band on his shoulders and carried it ,which allows Levin to step into the role of guitar-god that it seems he was born to play.  I know it's blasphemous for many to read this, but I actually prefer what Levin did here to the last couple of records Lynch did with the band; he is that good to me.  Guitar purists and snobs are likely going to tell you how derivative Levin's sound is, or how his intonation is a rip-off, or blah, blah, blah, blah.  Horse crap.  The guy can flat out shred and he saves the day for this sometimes very middle-of-the-road album.

My version of this album is the Deluxe Edition which comes with a DVD, which I just don't understand at all.  As I have said numerous times here, I have ZERO interest in watching the band talk about the making of the album, so it is very likely that the DVD will never leave the case.  Oh, by the way, the case is a danged digi-pack, and we all know what I think of those!!!!

When this album is at its best, it is every bit as good as Lightning Strikes Again, Erase The Slate, or the best parts of Hell To Pay.  It's those moments when it stumbles that keep this from becoming the best Dokken disc since Back For The Attack.  The more I listen, the more I love the rockers...and the more I don't like the filler stuff or the less-than-classic Dokken balladry.  Still, I'll take a slightly off Dokken over much of today's music any day.  For fans who can embrace what an older Don sounds like, and who can put away the "Lynch-or-nothing" attitude, there is a decent amount to like here.  Not as good as Lightning Strikes Again, but there isn't much in the band's catalog that is.

Rating:  A 65/35 album that is saved at times by Levin's undeniable talent.  Rock this at a 6.5 and enjoy the solid moments where Dokken is still Rokkin' and the band has flashes of their glory days.

Speaking of classic Dokken, how does this new album stack up to Jeff, George, and Mick's new T&N project?  Check that review here...

Back To Reviews Index
Posted by arttieTHE1manparty at 8:22 PM