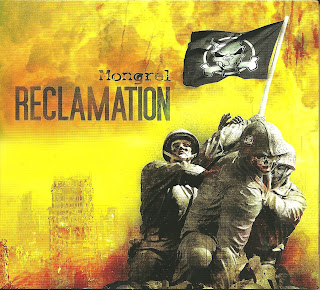 (c) 2012 Thom Hazert Company
Adam Savage--Guitars
Jessica Sierra--Vocals
Micah Maltais--Bass
Mike Hogan--Drums
Additional/Recording Musicians:
Dave Kauzukiewicz--Drums
Rev--Bass & Backing Vocals
Scott Campbell--Additional Vocals on "Wake Up"
Hmmmm....this is going to be difficult.  On the one hand, I do my very best to be honest and open about my feelings about the material I am sent, because I want to give the readers a fair impression of what they may hear if they choose to buy an album based on one of my reviews.  On the other hand, my momma always said, "if you can't say anything nice, don't say anything at all".  As such, I am very tempted to leave the rest of this review blank, as it is VERY difficult for me to find anything nice to say about Mongrel...and it's even more difficult to say anything nice about Reclamation.
Mongrel is a Boston-based metal band that combines doses of thrash, punk, hardcore, straight-up rock...and filth...to come up with a sound that reminds me a lot of the crossover bands that were on small labels back in the 80's.  Not only does their style remind me of those days and those small labels, so does the sound.  The production is so raw and so underground in feel it takes the album to the point of sounding unprofessional in spots.  The mix is decent, with no one instrument overpowering the rest, but the drum production is not particularly good and the record sounds like it was recorded in a garage with a boombox.  Who knows...maybe it was.
Lyrically, this album has some of the trashiest lyrics I have read in quite some time, and this is coming from a guy who gets sent dozens of albums a month from all genres of hard rock, modern rock, and metal.  Take for example this sample of lyrics from "Stillborn Savior":  "My stillborn savior, dead before you're born, My stillborn savior, just take this crown of thorns, My stillborn savior, now all my dreams have died, My stillboard savior, my aborted christ".  Or how about the classic chorus from "C & 1/2":  "You're not just a bitch, you're a C and a half (repeated four times)".  There is also the album's closer which has some more solid lyrics in it's chorus of "No Gods, No Masters, F**k You, You Bastards".  And, of course, I don't think much imagination is needed to guess about the lyrical content of the elloquent "F**k Off And Die".  Yeesh....
As to individual performances, Savages buzzsaw guitars are prominent throughout, but again, not so much as to bury the other instruments.  His is just the one instrument that I feel is played with more than the basest level of punk talent.  Sierra's vocals are just grating to my ears and nerves, never singing, but also not delivered with the snarl and skill of an Angela Gossow (Arch Enemy).  Her vocal approach varies from laughable sneer and snarl to almost rappish on a song like "The More I Bleed", which may be the worst song, musically if not lyrically, on the album.  And, whoever is playing the drums and bass, whether it's Maltais and Hogan or Rev and Kazukiewicz, simply lack anything more than rudimentary instrumental skills, as a sloppy rhythm section provides the shakey foundations for these tasteless blasts of aimless punk-metal.
Mercifully, only three of these songs hit the 4 minute mark in duration, and six of them are under 3 minutes.  I have to wonder if the reason these songs are so short is because the players broke their instruments by beating on them so hard, or if because they ran out of ridiculous, inane things to scream and rant about so they just stopped.
When doing some research on this band, I have seen them referred to as "brilliant", "unheralded and underappreciated", and "underground heroes".  My guess is that those reviewers were looking up antonyms and not synonyms in the thesaurus, because NONE of those words apply to Mongrel in any definition I could muster.  The band lacks imagination lyrically, displays no sense of melody or harmony, and, at least on this recording, exhibits about half of the talent I have witnessed in unsigned bar bands...in central NEBRASKA, no less!
Rating:  Don't waste your time even reaching for the knob, Glitter2Gutter readers.  There is nothing you will want to hear on this record.  Just turn it off....
Back to Reviews Index

Posted by arttieTHE1manparty at 2:52 PM