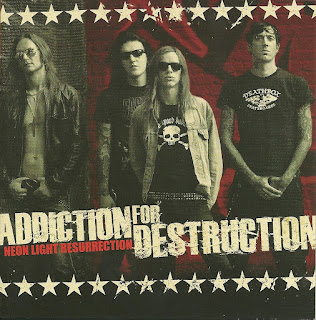 Addiction For Destruction is the latest Russian sleaze band to cross my desk in the past year, following John Galt and Shit Rave.  Unlike those two bands, however, Addiction For Destruction has released a full-length physical CD and has received distribution support from Demon Doll Records and Atomic Stuff, which should help to get their music out to the people who may want to hear it.  The question is, of course, SHOULD people want to hear it?

If all that mattered was appearance, style, and attitude, Addiction For Destruction would have it made before you even pushed play on your CD player.  Obviously the band borrowed their name from the Guns N Roses classic Appetite For Destruction, which is not an uncommon tactic of bands trying to make a name for themselves, so I guess you could give them some style points for at least having a good idea of who they want to emulate.  Then, simply judging them by their photos, they have the tattoos and long hair (well, 3 out of 4 do...) to go with the denim and leather, so that is in their favor as well.  But there have been a lot of bands that looked the part but simply couldn't play the part...or even play their instruments, for that matter...through the years, which was what I feared from this band, to be honest.

Of particular strength here is the guitar playing of Andrey "Zvon" Zvonkov.  Zvon has a firm grasp on the 80's sleaze sound, but he adds enough of a modern touch to keep  Neon Light Resurrection from sounding like a clone of something from that decade. In fact, Zvon seems to almost seamlessly blend the 80's sleaze sound with the more modern sound that I so often refer to here as the New Wave Of European Glam and Sleaze.  Think Guns N Roses or Faster Pussycat meets Crashdiet and Nasty Idols and you will have a good idea of Zvon's sound.  It's too bad that he is either no longer in the band or, perhaps, is only a studio member of the band, because he is the strongest part of the band overall and the main reason I was able to get through the first few cuts of less-than-stellar English translations, cookie cutter drum patterns, and derivative sounding songs.

The opener isn't horrible, and once you get adjusted to the lower-range sneer of Spice's vocals, it is actually a decent rocker and not a bad way to start off.  However, things go downhill from there, especially on the extremely cliche "Rock N Roll To You" or the unfocused pomp of "On My Needle."  To be honest, by the time these two tracks had rolled out, I was starting to wonder what it would take to get through the rest of the album.

I'm glad I stuck around for the second half of the album as it is by far stronger than the first five tracks.  Starting with "Nervous Breakdown", the band seems to find a groove and settles into a nice, aggressive, sleazy rhythm that I wish the entire album contained.  I kind of wonder if these later songs aren't older songs that the band is more comfortable with and that the first few tracks were put together so that the band had an entire album worth of material.  "Jane Is Insane" is a very catchy song that I like quite a bit, even if the lyrics are a bit odd.  One line that I think is actually pretty cool is when Spice sings, "Devil in her eyes and a smile like a stain".  That's some imagry I can honestly say I have never heard used before.  "Jane Is Insane" and "Feelin' Fine" fight over the rights as the best song on the album, with "Feelin' Fine" being a pretty cool, aggressive rock track that would serve the band well as a single and possible video, as I think it is the song most likely to attract the rock crowd these Moscow natives appear to be angling for.  The other two songs of note on this album also show up on this latter half of the disc, and both in the form of acoustic numbers.  "Jaded Heart" has some pretty nice guitar work, although Spice's vocals are a bit strained in spots.  Album closer, "(I Don't Care) You're Nothin'" is a bit cliched once again, but Spice's vocals work better here and, again, the song structure is solid and the track itself is above average.

The production is solid, which is a bonus, and there are not any major problems with the mix on the record, with the guitars sounding clean in the right spots and nice and grimy where it matters.  Additionally, the vocals are not buried in the mix or blaring so far out in front that the instruments get drowned out.  One thing that I will say about the vocals, however, is it sounds like numerous layers of vocals were used in a lot of spots, even on the lead vocals, which gives them an odd sound in places.  This is especially noticable on "My Resistance", for example, where it almost sounds like gang vocals are being used even for the verses.  It's odd, to say the least.

The packaging is top notch on this effort, so it's obvious some thought went into the project as a whole.  All of the lyrics are included in the full-color, 12-page booklet that also includes multiple band photos, credits, and thank-yous.  A very nice touch to this overall product.

Rating:  An above average first effort from a band that will only improve with more time to gel...and a better translation dictionary so the lyrics don't come across as so cliche.  Rock this at a decent 6 and keep an eye out for Addiction For Destruction in the future.

Back To Reviews Index
Posted by arttieTHE1manparty at 8:38 PM