HINDER "Welcome To The Freakshow" 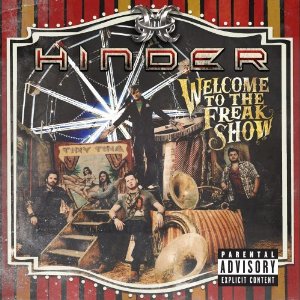 Towards the end of 2012, Hinder returned to the scene with a new album, Welcome To The Freakshow.  I have to say I was VERY excited, as anyone who reads this site with any regularity knows I am a Hinder fan and list them as one of the best of the current crop of American hard rockers.  Sadly, I came away from this new album seriously disappointed, as evidenced by this album ending up on our "Worst/Most Disappointing Albums of 2012" list here at Glitter2Gutter.

Let me say that I don't think that this is a terrible album by any stretch.  In fact, musically, it is executed very well.  It's just very disappointing to see the follow-up to the excellent All American Nightmare be so...weak...for lack of a better term.  For about 60 percent of this album, the music has lost its balls.  The album, as a whole, is far more Snoozefest than Freakshow, which is a total bummer.

Now, when this album rocks, it does so very well.  The album opener and lead single, "Save Me" is a strong, uptempo snarler, with Austin Winkler's voice in top-notch form and some serious guitar work from Blower and King. The song is semi-autobiographical in nature, as Winkler wrote the track after getting out of drug and alcohol rehab, and it delivers a powerful message in a raucous way.  What's even better is that this is by no means the strongest rocker on this album, as the title track, with it's infectious chorus, sounds like it could have easily fit on the ...Nightmare album with no problem.  Same goes for the pounding, biting, "See You In Hell".  "Ladies Come First", while still heavy, is easily the most melodic of the rockers...and also the sleaziest, bringing forth shades of the best of Hinder's often innuendo-laden songs.

But that's all the band has to offer us in the form of out-and-out rock on this album.

Ballads are the name of the game here, especially in the middle of the album, likely due to the fact that All American Nightmare did virtually nothing at radio and not much better at the cash registers, easily distinguishing itself as the worst selling Hinder album to date.  Of course, that's a pretty easy thing to have happen when your debut album (not counting the independent Far From Close EP) goes triple platinum, and the follow-up goes gold.  Still, when a label sees a band's sales dropping, they tend to do the formula thing and make grabs at radio airplay, which I am inclined to believe Universal Records did when they shuffled Hinder off to their subsidiary label, Republic Records.  Anyone who has witnessed the rock and roll circus of Hinder live can't believe that it was their decision to go so ballad heavy on this record.  Yet this is what we are left with...

"Talk To Me" is insanely generic and boring, sounding more like an adult contemporary radio track than a Hinder song.  "Lips Of An Angel" is more powerful in its depth and delivery than "Talk To Me", if that means anything.  The very next track, "Get Me Away From You" keeps the plodding pace going, albeit with a somewhat better song.  Two tracks later, we are treated to easily the best of the slow jams, with "I Don't Wanna Believe", a pain-infested, modern take on the power ballad that I actually hope ends up on concert set-lists.  "Anyone But You" is yet another ballad but one that sounds like Hinder-gone-Nashville.  If this showed up in video form on CMT or GAC, I wouldn't be the least bit surprised.  (By the way, CMT and GAC are country video channels...imagine that!  Music videos!!!)

As to the remaining tracks, they are an odd assortment that don't really fit anything Hinder has done before.   I'm not sure how to describe "Is It Just Me".  It's very poppy in its delivery and, while somewhat catchy, I don't really know what the point is.  Album closer, "Wanna Be Rich" is a lyrically-biting song that sounds like it could be the follow-up to "Striptease" from the last album, but this track has all sorts of electronic sounds and effects...heck, it's practically a dance song, reminding me of Frankie Goes To Hollywood's "Relax" at one point!...and is not the best way to bring things to a close, although it is better than any of the ballads here.

The packaging is solid, with a big 14-page insert with lyrics, pictures, credits, and thank-yous, which is a good touch.  Plus, Hinder has managed to avoid the dreaded digi-pack for at least one more album, so kudos for that!

All in all, not horrible, just disappointing overall, and downright boring in spots.  I only bothered to rip half of the album onto my mp3 player and my iPod because that is all I will likely ever listen to.  Hinder can, and has, done much better, so I am hopeful that the band will recover on its next effort and find a happy medium between the balls-out rocking of All American Nightmare and the more radio friendly, yet not sell-out, material of Take It To The Limit or Extreme Behavior.

Rating:  Rock this at a disappointing 5.5, and that may be a bit generous.  The rockers save the album...but just barely.

Posted by arttieTHE1manparty at 1:38 PM