Okay, so we've given you the better part of a week to digest, gripe about, argue with, and rip apart our "Worst/Most Disappointing Albums of 2012" list, so we thought now was the time to ease your suffering and bring you what you probably really wanted...our BEST of 2012 list!  Okay, sure, you probably weren't holding your breath for this list, and no one went on a hunger strike that we are aware of, but still...we did get more than a few emails asking where the "real list" was.  So...without further hesitation, we give you (in reverse order), the TOP 12 of 2012!

One thing that I cannot stress enough is that these rankings DO NOT necessarily reflect the individual album rating each received.  Obviously, if you go back and look at the reviews of each of these albums, they are all 8's or higher, which means we think pretty highly of them here at G2G.  However, as anyone who listens to music will attest to, sometimes an album grows on you and becomes a favorite even if there are a couple of songs that get on your nerves at times.  Such is the case with some of these albums.  Other times, an album can score very well and be performed to near flawless levels, but not necessarily hold a listener's interest for long periods of time.  As an example, Journey's last album, ECL1P53 (reviewed here) was one of the best pieces of music released in 2011, in my opinion, performed nearly perfectly, but little of it is as memorable as the classic Journey songs that everyone has to sing along to when they hear them.  So, in short, an album's ranking plays into its placement in the Top 12, but not necessarily it's eventual actual placement.  Make sense?﻿ 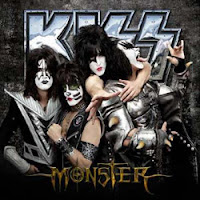 12.  KISS "Monster"  There ain't no school like the old school, or so the saying goes.  And there ain't many more old school than the masked masters, KISS.  Surpassing the solid Sonic Boom from a few years ago (at least in my opinion...others disagree), Monster is a very good piece of work that shows the band still remembers where it came from and what it's core audience is wanting from the band.  Granted, the band has never really changed all that much aside from Carnival Of Souls and maybe The Elder, but Monster should silence any doubters that wondered if Paul and Gene still had it in them to record a solid, top-notch KISS record. 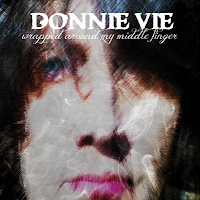 11.  Donnie Vie "Wrapped Around My Middle Finger" Smart and sassy, this is the album is like the darker side of Enuff Z'Nuff, and it is a solid listen all the way through.  There is enough of the "band" in the sound to satisfy the older fans, but newcomers will find a lot to like about Mr. Vie's work, as well.  A guest spot from Kip Winger adds to the fun here, making this one of the best of 2012, despite being an album I'm betting a lot of people overlooked or missed.  If you fall into this group, rectify the situation and snap this disc up as soon as you are done reading our list! 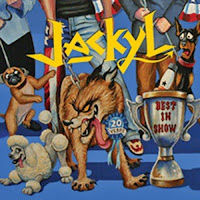 10.  Jackyl "Best In Show"  Another old-guard band that made a GREAT return, Jackyl may have released the best album of their career, and certainly the best in at least 15 or 20 years.  With only one track that I would leave off, and the rest being solid, top of the heap southern-fried sleaze, Jackyl has shown that they are in no way ready to hang things up.  Always a killer live band, Jackyl sounds especially tight and cohesive here, showing that there is much more to the band than Jesse and his chainsaw! 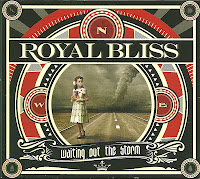 9.  Royal Bliss "Waiting Out The Storm"  A surprise to many, perhaps, but this is one excellent record from start to finish.  Neal Middleton has a powerful, soulful voice that is packed with emotion, and the band is a formidable one, whether on this record or in a live setting.  Don't let the fact that this is a "modern" rock band trick you out of giving this album a chance...that's just the devil on your shoulder whispering in your ear to keep you from enjoying an excellent album filled with great performances and some awesome songs.  "Crazy" and "Bleed My Soul" should snag  melodic rock fan's ears immediately, and the rockers will love "I Got This" and other tracks. Following this up could be tough for Royal Bliss. 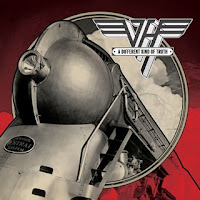 8.  Van Halen "A Different Kind Of Truth"  Go ahead...try to deny that it was GREAT getting to hear David Lee Roth and Eddie Van Halen team up one more time.  And, haters, feel free to try to dismiss the obvious talent of one Mr. Wolfgang Van Halen on bass.  Sure, it would have been nice to have the entire band back together, but 3/4 is pretty darn good as long as 1/4 is DLR and 1/4 is EVH.  Hopefully this is NOT the end of this legendary band, but if it is, what a way to go out! 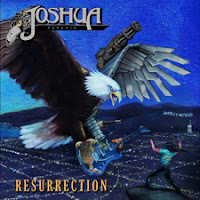 7.  Joshua "Resurrection" One of the true surprises of 2012, at least for me, was the out-of-nowhere return of Joshua!  I mean, this band had been off the face of the map for more than a decade, only to come roaring back with a blistering combination of guitar skills, powerhouse vocals, and a message that packs a wallop.  I have no idea what Joshua's plans are to follow this album up, but I am hoping it doesn't take another 10 years or more before we hear from him again. 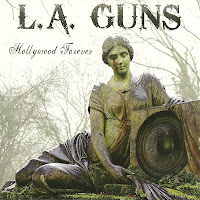 6.  LA Guns "Hollywood Forever"  Since Phil Lewis rejoined the band, LA Guns seemingly has grown stronger and stronger with each subsequent release.  2012's Hollywood Forever is no exception, and this is an album that just gets stronger and stronger with each spin, at least for me.  Sure, the last track is a bit odd (Lewis sings in Spanish), and I'm not overly fond of the ballad on the disc, but with with 14 tracks, a single miss (I like the Spanish track, personally) is not capable of derailing a killer album.  This might be the best Lewis has ever sounded vocally, and since this is likely the last time we will hear Blades as the guitar player, I would encourage anyone who missed the boat here to pick up Hollywood Forever at once. 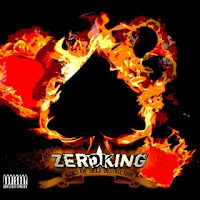 5.  Zeroking "Kings Of Self Destruction"  Out of nowhere comes a band most of you have probably never heard of...but should.  Zeroking may be just about the perfect blend of the raunchy, gritty-yet-melodic sound of the late 80's/early 90's and the more modern sounds of today's hard rock world.  The opening track, "Dead Rockstar" is worth the price of the album all by itself, and things don't let up much from there.West Virginia has been hiding a huge secret from the rock world...hopefully this album will get them out of the sticks and out on the road so more fans can find out what Zeroking is all about! 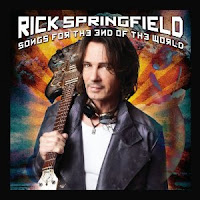 4.  Rick Springfield "Songs For The End Of The World" Yeah.  I know.  Weird, huh?  If you would have told me at the beginning of 2012...heck, at ANY time in the 2000's...that a Rick Springfield album would find it's way onto a "best of" list that I would be a part of, I would have called you crazy.  Yet, somehow, the seemingly ageless Springfield has managed to pull off the absolute surprise of the year with this slab of melodic rock that maintains some of his 80's-era pop sensibilities, intertwined with a bit of the darker music he became known for in the early parts of the 2000's.  Guitar driven and much more lyrically insightful than you might think possible from the "Jessie's Girl" writer, Songs For The End Of The World was a truly pleasant surprise for me.  Well played, Rick...well played! 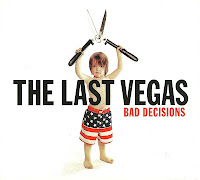 3.  The Last Vegas "Bad Decisions" Speaking of acts that just get better and better, The Last Vegas fits this bill perfectly.  While their past albums were very good, Bad Decisions has to jump the band into the great category, at least for this one album (and hopefully the future).  Having had the chance to catch these guys live earlier this summer, I can state with confidence that musically and vocally, the band brings it live every bit as much as they deliver on this album.  "Evil Eyes" is a monster of a song, and "Beat To Hell", "She's My Confusion", and "Bad Decisions" only add to the fun!  As with a couple of other albums on this list, a single weaker track, once again a ballad, is not enough to kill the momentum of this excellent offering.  A must own album of 2012. 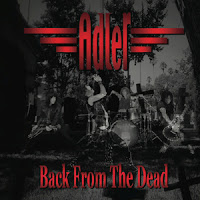 2.  Adler "Back From The Dead"  Oh so close to being the top of the heap for 2012, this album is simply an excellent piece of art that really bridges the gap between the glory days of Guns N Roses and the modern hard rock sound of today.  No, you won't hear any "Paradise City" or ""Welcome To The Jungle" sounding material here, but there is a combined sense of urgency, a solid melodic base, and a healthy dose of real attitude, not false bravado, that a lot of today's music is missing.  That combination makes this a must-hear record for 2012.  Thank goodness that Adler is back from the dead, because the band may help resurrect a sometimes lifeless, uninspired music scene in the hard rock world. 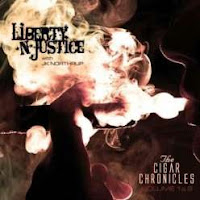 1.  Liberty N Justice "The Cigar Chronicles" Without a doubt, the best release of 2012 is the massive project by Liberty N Justice.  While I am partial to the second disc, the original material, the first disc, which is a great collection of uncommon cover songs, is also a solid listen.  Liberty N Justice have put out any number of great albums over the years, but there is none better than The Cigar Chronicles, and that is saying a lot.  While the physical CDs have not yet shipped, anyone who pre-ordered already has the digital files in hand, so for that reason, I am considering this to be a 2012 release...and the best one of the bunch!  If you haven't got your copy yet, head over to www.libertynjustice.net and be sure to order it and get those digi-files for yourself so you can say you, too, own the best of 2012!

So there you have it, folks!  The Top 12 of 2012 according to Glitter2Gutter!  Is it scientific?  Nope...but it was a lot of fun to put together.  You can't imagine the hours of music I had to struggle through to come up with the best of the best.  Yeah, it's a tough job, but I'm just the guy to do it!