PETER CRISS "Makeup To Break Up: My Life In and Out of KISS" (Book Review) 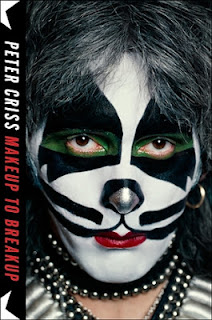 Original KISS drummer, Peter Criss, is the latest member of the iconic band to release his autobiography.  "Make Up To Breakup" is an extremely interesting read, especially if you have previously read any of Gene or Paul's accounts as to why the original band broke up, why the reunions didn't last, etc.  The latter part is of special interest to me because, as anyone who read Ace Frehley's book will know, the Spaceman ignored the reunions completely in his book, so Criss's is the first to take a "non-corporate" look at the situation.

In the 360+ pages of this tome, Criss discusses the usual stuff: his early life, his pre-KISS bands, the early, struggling years with the band, their rise to super-stardom, their eventual crash, etc.  Mixed in, however, are stories of his two failed marriages, his family, his time spent in rehab, and his near suicide attempt following the California earthquakes that left him reeling.  Peter spends time dishing about what it was like going back on the road with his band, CRISS, criss-crossing the country in a Winnebgo to play in tiny dives such as the Sandbox, his disappointment with the failure of his solo albums, and what finally drove him to accept the reunion of the original members of KISS.

Criss also discusses his spirituality, his relationship with God, his estrangement from his daughter, and his marriage to the woman who in many ways saved his life.  No stone is left unturned, or so it seems, as the man even discusses what it was like, and what he went through, when he was diagnosed with the "woman's disease" of breast cancer...at the same time his wife was battling another form of the vile disease!

Is the book a tell-all?  I would say so, yes.  In fact, sometimes Criss tells a bit too much, especially in regards to the sex with groupies, the measurements of his and his bandmates' genitals, and other such things, and at times the book really pushes the boundaries of crudeness.  However, as Criss mentions a couple of times, he poured out all of his memories to complete this book, and the reader really has a sense that he/she is listening to a confession of past sins as much as they are reading a book about the mighty KISS machine.  Surprisingly, and to his credit, Criss lays bare the facts about which albums he didn't actually play on, the fact that he completely forgot how to play some of the band's early classics, his falling out with Ace, his hatred for Tommy Thayer, and the bitterness he feels toward both Gene and Paul.  Will we ever see another full KISS reunion?  Peter doesn't really hide his feelings about that fact, either.

Fascinating, yet often not exactly fun, to read, I would strongly recommend "Makeup To Break Up" to any KISS fan that is looking for not only the other side of the story, but the side that, when taken with several facts from Ace's own autobiography, really feels like it is the likely truth of the matter in a lot of cases.  A compelling read, but not for the faint of heart or the easily offended.

Back To Sleazy Readers
Back To Home Page
Posted by arttieTHE1manparty at 10:03 PM