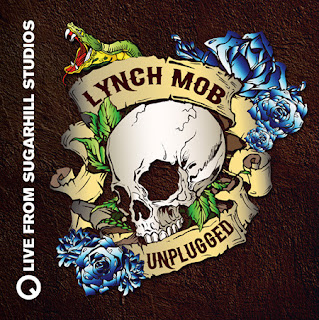 It seems like George Lynch and Rat Pak are cranking out a new George Lynch or Lynch Mob EP release about every 9 months now, so I wasn't overly surprised to see the new Unplugged: Live From Sugarhill Studios EP released this past week.  I was a bit surprised to hear George do an unplugged, acoustic album, as this type of setting really doesn't lend itself to the skill set possessed by one of the true guitar gods of the 80's....or so one would think....

George Lynch shows himself to be in fine form, even without electricity, as he is able to pull of some pretty cool acoustic leads on this little teaser of an album.  This is especially true on "All I Want" and the seminal Lynch Mob classic, "Wicked Sensation".  Both of these songs...and really all four songs...find Lynch (with some help from Brian Tichy) bending the strings with a different sort of soul that can sometimes be lost when the amps are plugged in and cranked to 10.  Sure, Mr. Scary is a bit more tame on an album like this, but if anything it shows that his skill is genuine and not just smoke, mirrors, foot pedals, and whammy bars.  Crane also acquits himself nicely on acoustic bass here, and the percussion added by Sheth is simple and keeps itself where it belongs, in the background, allowing the star of the show step to the forefront.

Oh...you thought I meant George Lynch?  No, no, no...the star of the show here is, without a doubt, Oni Logan.  Logan's voice is IDEAL for this type of performance and he gives possibly the best performance I have ever heard him present on these four songs.  Sure, the music is great and Lynch is the namesake and the reason people likely will pick this up, but make no mistake, Logan's voice is the driving force behind these songs as the passion in his voice is undeniable.  He lets the smokiness of his voice really creep in on "Where Do You Sleep At Night", and the bottom range of his vocals, as well as the blusiness, is given front and center treatment on "Wicked Sensation".  On top of it all, he sounds like he is having a lot of fun with these songs, as does the whole band really, which is nice to hear.  Logan has received a bad rap with a lot of people over the years, for any number of reasons (none of which I can confirm, as I've never met the guy), but his vocal skill should not be questioned, especially in this type of setting.

This little EP closes with a band interview which, honestly, I could completely do without as it adds nothing to the effort. No real need for further comment, so I will just leave it at that.

While the material is obviously different, as is the band, I find this EP to be far superior to the work turned in by Lynch's old band, Dokken, on that band's One Live Night release.  "Where Do You Sleep At Night" was a bit of an odd selection, but it works nicely to add depth to the more well-known songs that are also featured, but with only four songs, this EP is painfully short and may have been better served with another "hit".

It's almost criminal the way George keeps teasing his fans with these EP's, but rumors of full-length albums never seem to come to fruition, so maybe this is the route George is determined to take for the remainder of his recording career outside of T&N.  I certainly hope not, but if so, I hope that the quality continues to be this high, whether solo, as a group, acoustic, or plugged in.  This is top-shelf stuff, folks.  Don't you dare miss out.

Rating:  An acoustic cranking is in order here...jump it up to an 8.