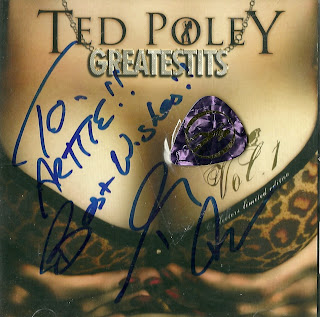 (c) 2009 Ted Poley
DISC ONE
DISC TWO
Culled from a vast array of non-Danger Danger albums, Greatestits comprises an excellent cross-section sampling of what Ted Poley has been extremely busy doing over the past several years.  Featuring tracks from his solo albums Smile and Collateral Damage, as well as his work with Bonemachine, Melodica, Pleasuredome, JK Northrup, Poley/Pichler, Jack Frost, and Poley/Rivera, there is something here for just about anyone who is either a fan of Poley's voice or the melodic rock style that Poley adopted upon leaving Danger Danger (he has since returned to front that band).  While that would likely be enough for most Danger Danger or Poley fans, Ted goes above and beyond to make this collection worth shelling out the requisite dollars and cents by including demos, unreleased tracks, outtakes, a Christmas tune, and a parody song.    ﻿
As one would probably guess, there are a variety of styles and tempos covered in the 33 songs that make up over two hours of music here, although nothing overly shocking; there is no country, rap, or techno included in this package, so you can put those concerns aside!  Most of the music falls in Poley's wheelhouse, especially the Poley/Rivera material that is likely the most familiar to fans from the past 5-10 years, although some stuff rocks harder than other material.
Fans who have never heard the Bonemachine material might be taken aback a bit by the production quality of tracks 15-17, but from what I understand, these songs were actually demos and never given a proper mixing.  It never renders the material unlistenable, but there is a definite drop-off in sound quality between this and, for example, the Poley/Rivera material.  Still, the songs are very well-written and performed although they are far more blues-oriented than thing Ted every attempted with Danger Danger.  Ted's voice is still strong and recognizable and he sounds very much at home with this more laid back/less overblown style.  "Life And Times" is a bit of an odd tune, especially toward the middle of the song, reminding me of an adult contemporary track like Michael McDonald or some other 80's pop artist may have worked on, but then the guitars kick back in and pump the rock back into the track.  "Simple Life" has a pretty fat bottom-end groove to it and is one I would really have liked to hear full production on as it sounds very incomplete in this form.  "Phone Sex", again, is very raw in its production and has a very bluesy guitar sound running throughout (along with a somewhat annoying telephone ring).  Interesting stuff, to be sure, but definitely lacking due to the production.

The Poley/Pichler material may be a bit of a sugar-shock to some listeners, as there is nowhere near the level of rock that Danger Danger incorporated in their tunes on these songs.  Pop styled songs with insanely slick production, these songs may not be everyone's cup of tea, but they do showcase a smoother side to Poley's voice.

The real treats here are the demos, the Christmas song, and the previously unreleased Japan-only track, which is one of the best tracks on the collection.  Also worthy of special mention is the Melodica track, "Lovemetal" which should have been a big radio hit, in my opinion.  I also really enjoy the track Poley worked out with Jack Frost, and I felt that the blistering "Wastin' Your Luv" was one of the stronger points on Frost's disc when it came out.   If you ever wondered what a Poley "metal" song would sound like, you get a good indicator here!  The Pleasuredome track is another solid rocker, and while I'm generally not a huge fan of parodies, but "Ted Poley" is pretty funny in limited spins.

Nothing here is a "hit"...or a "tit" for that matter...but it doesn't matter, as this is a generally solid collection.  Sure there are some sound quality issues, but all in all, it's a solid, if LONG, listen.  The packaging is VERY generic, with no songwriting or musician credits to be found, no lyrics, no pictures (other than album covers), etc.  My copy was purchased a couple years ago when Ted was offering to include an autograph and a guitar pick to people who picked up the limited edition version.  I'm not sure how many different versions there are, so I do not know if there is a single disc version of this effort out there, but if there is, I have never seen it.

Rating:  With a collection this big, there are bound to be hits and misses, and not everyone will like everything, so I'd rock this at 6.5.  If you pull out a single disc worth of your favorites, you could conceivably crank it to 7.5 or so.