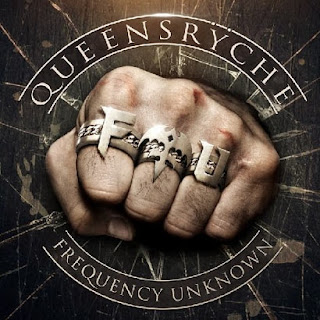 So, the first shot in the dueling Queensryche's has been fired by the, well, fired former frontman's version as Geoff Tate has released his band's debut album, Frequency Unknown.  An interesting title, but I have to wonder if he was just searching for words that started with "F" and "U" so he could send a not-so-subtle message to the other Queensryche.  (Rumor has it Feathered Undergarments and Festering Uvula were also considered....no they weren't....)  The placement of the classic Queensryche logo on the middle finger of the fist is another nice little visual element for fans and former band members to discuss among themselves.

Regardless of the eye-catching letter placement, the only thing that really matters to 'Ryche fans is which version of the band can deliver the goods.  Who is going to properly wear the mantle of Queensryche?  Well, that depends largely upon which era of the band you are hoping to hear.  If you are looking for a rehashing of The Warning or Rage For Order then I suggest you keep on walking when you see this album in the store racks (or scroll down if you are shopping on-line), because this is NOT 1980's Queensryche.  However, if you find yourself more in line with the strongest material found on later 'Ryche albums such as Promised Land, Hear In The Now Frontier, or even later efforts like American Soldier and Dedicated To Chaos, then, my friends, you have likely found a keeper, for this is the direction Tatesryche (which I shall now call this version of the band because...well, I think it's fun) is headed in.  As for me, I find myself in the somewhat precarious position of being a fan of BOTH eras of the band (which is not an overly common location to find oneself in), so I was neither letdown or overjoyed with the direction of Tatesryche; I simply took it for what it is.

Geoff Tate has claimed that after Chris DeGarmo left the band it was Tate who steered the musical ship of Queensryche.  I have to admit that I was somewhat skeptical of this claim as his solo albums both left me wanting, to be honest, and I was afraid that this album would be more of the same.  I am happy to report that it is not.  Frequency Unknown is not completely unlike the best parts of many of the post-Empire efforts of Queensryche.  In fact, I was generally pleasantly surprised with the direction of Tatesryche, especially since Geoff and Company took it upon themselves to incorporate a lot more guitar soloing on this record, something which was sorely missing on the worst parts of ...Chaos, for example.  But this incorporation of guitars comes at a cost:  there is no real band it would seem, and the large number of hired guns, really leaves me wondering if F.U. is as much of a band effort as Tate would have us believe.  (For what it's worth, I believe the "band" is now the Sarzo brothers, Gray, and Wright, with Randy Gane on keys, which is an impressive line-up).   With such guitar luminaries as Brad Gillis (Night Ranger), KK Downing (Judas Priest), Dave Meniketti (Y&T), Ty Tabor (King's X), Craig Locicero (Forbidden), Chris Poland (Megadeth), Robert Sarzo (Hurricane) and even former Queensryche member Kelly Gray, there is no doubt there is talent behind the axes here, and it shows for the most part.  Other musicians brought on board include Rudy Sarzo (Ozzy) on bass on a few tracks, and drummers Paul Bostaph (Slayer, Exodus, Testament), and Simon Wright (AC/DC, Dio).  So, with all the talent on this record, what are the results like?

Good, for the most part...again, depending upon your choice of eras...but not what you might expect.  With previous members of Slayer, Forbidden, Judas Priest, and Megadeth on board, one might expect this to be a far heavier album than it is.  There is some heft to the record, though, but it is more of a modern-feeling heaviness than a metal heaviness; this is a porgressive hard rock album with both metallic and modern influences, NOT a heavy metal record.  That being said, it is worth noting that the rhythm guitar playing of Locicero throughout this record is top notch and really gives some power and crunch to the rockers on F.U.  Tracks like the lead single, "Cold", or the gritty "Slave" have some punch to them, and Tate's vocals are right at home in the emotive tenor range that he has employed for most of the previous five or six records.  The most metal moment is a very good one, as KK Downing leads Tatesryche through the charged up "Running Backwards", and once again, Tate's vocals are strong and controlled.  I'm guessing that this track will be the one that makes old school Ryche fans sit up and take notice, and will possibly pull a few dissenters off the fence.  "Fallen", on the other hand, really shows the modern slant of the record, sounding musically like it could slide in right next to a Disturbed or Sevendust song with ease, which is a bit odd with the likes of Y&T's Meniketti slinging the axe on this number.

"Running Backwards" aside, the stand-out tracks here all have solid melodic moments, with "In The Hands Of God" being the truly shining moment of the album, sounding a lot like it could have come from my favorite 'Ryche album, Promised Land, and the powerful, sweeping "The Weight Of The World" bordering on the epic status of some of the best moments of the fractured band's catalog. "Life Without You" is another really solid song that reminds me of just how good Queensryche has sounded in the past and could sound again, and with no true ballads on the disc, "Everything" and "Give It To You" both work toward the slower side and both are done effectively with Tate's voice working effortlessly throughout the tracks.

There are no real stinkers in the new tracks, although I have to admit the use of a theramin in the song "Dare" kind of throws me for a loop as it gives the song an odd feeling.  No, it isn't the new material that gives me any issues.  The biggest problem on this album?  The re-recordings, no question.  They are not good.  At all.  And it's not just Tate's vocals that are the problem.  For one, these songs are not recorded with a band or any of the guest musicians mentioned above.  Martin Irigoyen performs all the guitars, bass, and drums on each of these songs and this exposes weakensses in not having a full band of musicians skilled in a specific instrument being utilized.  This is especially evident on "Jet City Woman" and "Empire" where whole layers of the songs seem to be missing.  As to the complaints about Tate's vocals on these songs, there is some merit in those complaints.  Tate's voice doesn't sound "shot", as so many people seem to like to say, but he does sound tired and lacking in passion.  Sure, he misses some notes, and several of the high spots are dropped in register, but if you really listen to these four songs I think there is more to it.  I think that these songs were done with as little mixing or overdubbing as possible.  It wouldn't surprise me if these were one or two take recordings, in fact.  You get the distinct impression these were very quick, very raw additions to the album where Tate likely said "good enough" and then moved on.  The production on these tracks is very empty, with lots of musical holes in each of them which is unfortunate as these are among the most requested songs of QR's catalog.

And while we are on production issues, much has been made of the production problems with this record, and, again, there is some merit to those complaints.  The record does sound muddy in a few spots, especially when played at a moderate volume.  I have noticed that when I turn the music up louder OR if I listen to the record through a good set of headphones the issues don't seem to be as prevalent for whatever reason.  I wish Tate had taken another few weeks to really nail the production on this record, as I think that would have shifted a few detractors more into his camp.

Overall, this record is nowhere near as bad as a lot of people have made it out to be, and I find myself enjoying it for the most part.  When I ripped it to my iPod, however, I have to admit that I dropped the re-recordings as I have a hard time listening to Tatesryche cover Queensryche, which is what we are basically forced to do on those songs.  Other than those glitches, if people listen with a truly open mind I think they will find that this record is not as bad as the Tate haters want it to be, and that it is actually a solid listen with several very good moments.

Album of the year?  No way.  Stinker of the century?  Not even close.

The bar has been set for the other Queensryche now.  Do they hurdle it or limbo it?  Time will tell, I guess, but Tatesryche certainly doesn't make things easy for the rest of his former bandmates.

Rating:  I like it, but the re-recordings kill the rating, dropping this to a rocking 6.5, although "...Hands Of God" and "Running Backwards", among others, give me a lot of hope for Tatesryche round 2.

Back To Reviews Index
Posted by arttieTHE1manparty at 8:28 AM