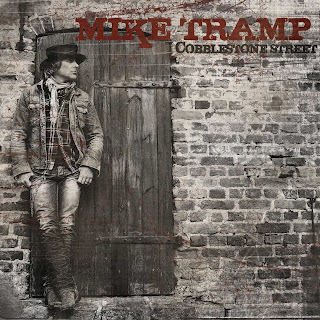 It has been a little while since I picked up anything from Mike Tramp, and there are various reasons for that. I was a fan of White Lion back in the day, especially the first album, Fighting To Survive, and the mega-hit, Pride.  Big Game was a decent enough album, albeit a bit different in its approach, and Mane Attraction was a very solid, if overlooked album, but then the band broke up and I lost interest.  Tramp's Freak Of Nature project really did nothing for me, and I got tired of reading about the constant bickering between Tramp and guitar slinger extraordinaire, Vito Bratta.  The re-formed band's Return Of The Pride (minus Bratta) was pretty good, but it seemed the magic was gone and I just kind of lost track of Tramp and company.  Someone sent me one of Mike's solo albums and, while not terrible, it had more in common with Bryan Adams' styled music that White Lion, or even Freak Of Nature, so I just stopped seeking his music out.

When this new album showed up in my mailbox, I took a look at the cover and thought, "okay...now what?" If Tramp was trying to look like...well...a tramp, he certainly succeeded, but I had no understanding as to why.  Then, when I put the CD in, I was like, "what the hell?!  An acoustic record?!"  I was pretty much ready to write the thing off.

But then I pulled out the lyrics and read along...and I got it.  This album isn't about who Mike Tramp was, or even still is, when he's with White Lion.  This is about who Mike Tramp is as a musician the REST of the time.  White Lion is a band; this is Mike Tramp telling his stories his way, without all the pomp and bombast of his "day job" band.  Imagine Mike Tramp singing some of the more emotionally charged acoustic works of  Springsteen or maybe a Neil Young.  I think you will get an idea of what this album is about and where it will take you as a listener.

It's tough to think of certain tracks as being stand-outs on an album such as this, but if backed into a corner, I would say that my favorites would be "Angel Or Devil", "Ain't The Life I Asked For", or "We'll Be Alright" which I found especially poignant as it deals with fatherhood.  The title track is pretty cool as well, and so is "Caught In The Storm".

While it may be difficult to pick a favorite, it's pretty easy for me to tell you what I don't like here.  For one, the piano is kind of annoying in spots; it just doesn't seem to fit and is mixed too out front in some songs.  For another, I wish Tramp would have left "When The Children Cry" alone.  There is nothing here that adds to, or improves upon, the original, and it actually seems to take some of the soul of the original to hear what was already a very stripped down song get stripped even further.  The song just sounds naked, for lack of a better term.  In all honesty, I skip the track, preferring to remember the song for what it was when White Lion was at their peak.

Tramp's voice is stark and emotion-filled, but still strong.  It's funny that I say that because one of the things I complained about as a younger man was the fact that he could sound TOO emotional at times...I think I used the term "whiney" a LOT back then...on the more emotional ballad material.  It's interesting how time changes our perspectives on a lot of things, which is exactly what Tramp is trying to get across on Cobblestone Street.

As to packaging, the lyrics are all included, which frequent readers will know I am a fan of.  There are a couple of alternately posed pictures in the booklet, but nothing spectacular, and there is no bio or explanation of the album of any sort, just the basic recording credits and a couple of thank you's.  Much like the album, it's just the basics here, but they are sufficient.

Rating:  Not something I would crank, because the music doesn't lend itself to that, and I would have to be in the right mood to play this often.  Musically, I would give it a "rock it" rating of 6, although that rating doesn't reflect the quality of music as much as it reflects the lack of punch to the music.  As far as the content, a crankable 7.5 is not out of line, and fans of this type of music are going to find a lot to love about Cobblestone Street, no doubt.

Posted by arttieTHE1manparty at 8:13 PM