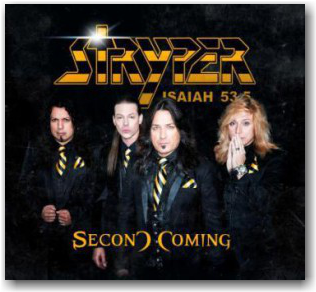 There has been quite a trend lately of bands re-recording their classic material.  The reasons vary, but most generally it has something to do with the band being able to use and license the material they originally wrote but signed away the rights to in some contract 20 or 25 years ago.  The venture is risky, to say the least.  Fans have fallen in love with the originals (if they didn't, they probably aren't going to buy the re-records...), the singers have lost their range, the band decided to rearrange everything...many things could go wrong when a band decides to do something like this.

Stryper is the latest band to tackle this chore and they do a more than commendable job in doing so.  Has Michael lost some of his range?  Possibly, but you really couldn't judge that by the lack of screams on this album, as Sweet lets things rip on multiple occasions.  Yes, there are a lot of vocals that are performed in a lower register on these re-records, but these are most obvious in the backing vocals.  This is especially true on a song like "Sing-Along Song", which, to be honest, took several plays before I got used to hearing it.  I will tell you that I prefer the original, but I like what the band has done on this track as well.  In fact, for the most part I like what the band has done on all of the tracks here, as they all come across as grittier, maybe even "more raw" if you want to use that term, sounding like they have been recorded in a more live fashion and not over-produced.

One of the main improvements here is the mix of the instruments.  Go back and listen to the original albums and it can be nearly impossible to find Timothy Gaines' bass on some songs.  That is not the case now.  Robert's drums sound livelier as well with more thump to them.  Oz and Michael have always been an understated guitar tandem, in my opinion, and that continues to be the truth here as the two play off of each other like the decades long team that they are.

Again, as I mentioned above, if I had one complaint about this effort it would be the obvious register change in the backing vocals.  I know that seems like a minor point, and that should be a good thing.  There are times, however, where they almost change the feel of the song.  The previously mentioned "Sing-Along Song" would be a perfect example.  The song isn't quite as bouncy or as "fun", if that makes sense, and that was what that song embodied to me: FUN!  I loved singing along to that track at concerts.  And, as I mentioned, after several listens, I am prepared for the register change, and I don't mind it.  At first, however...whoa...it was OBVIOUS something was different!  This is the case in a couple of other places as well, but I think most people will be like me and be able to work their way through the changes.

The two new songs here are a real treat, especially album closer, "Blackened".  This is a perfect example of the band finding that happy medium between moving forward without forgetting where they came from.  A pure rocker from start to finish, "Blackened" picks right up where "God" left off on The Covering a couple years ago.  "Bleeding..." is a solid enough song as well, albeit a bit more mid-to-slower tempo, which is fine.  As for me, I'll take an album of "Blackened" style songs any day!

The song selection is pretty much what you would expect, with songs being culled from the first three albums.  The glaring omission would be "Honestly", but that song has been played to death anyway, so I don't miss it at all.  There are rumblings that there will be a second Second Coming coming soon, possibly as early as the end of this year.  The next version will feature songs from In God We Trust, Against The Law, and the more recent releases.  I am anxious to hear what the band does to the A.T.L. songs, and I will be waiting to see if they decide to include the re-worked version of "In God We Trust" that they released a few years back.

The packaging is a digipack (I know, I know...), but the lyrics are all included along with several color photos and extensive thank yous and a brief band bio.  Frontiers generally does a good job in this department and they didn't disappoint here....other than the digi....

Rating:  Crank this re-recorded effort to a generous 7.5 and wait with bated breath for the next version to come soon.  An album of all new material is also said to be in the works, so be on the lookout for that as well...