DAVID ELLEFSON "My Life With Deth: Discovering Meaning in a Life of Rock & Roll" - BOOK REVIEW 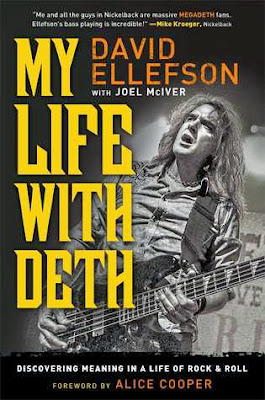 From his humble beginnings as a farm boy in Minnesota, to his rise...and fall...with Megadeth, one of the most celebrated thrash bands of all-time, David Ellefson has somehow managed to continue to move forward in his life, even when his lifestyle was dragging him backward.  Ellefson relates this to the reader in his new autobiography, "My Life With Deth: Discovering Meaning in a Life of Rock & Roll".  Co-written with Joel McIver, "My Life With Deth" is an interesting, absorbing read that I flew through in a total of about 15 hours over two days.  Not that the material is written in a simplistic way, but this is one of those books that flows so well you find yourself having a hard time putting it down.

The book starts with Ellefson's childhood in Minnesota, but unlike so many other memoirs, this book doesn't go into every painstaking detail of that childhood, losing the reader's interest before even getting to the main reason the book was purchased.  I HATE THAT!  It drives me nuts to have to read about uncles and aunts and third cousins that have nothing to do with the story.  Thankfully, Ellefson and McIver dispense with that kind of filler and get to the guts of the story without sacrificing any of the important and relevant facts about Ellefson and his relationship with his parents and brother.  From there, we are taken through Ellefson's first bands, most notably Toz, and his eventual move to Hollywood.  Once there, Ellefson meets up with an upstairs neighbor who drops a flower pot on Ellefson's air conditioner when they are playing their music too loud.  Of course, that upstairs neighbor turns out to be Dave Mustaine, and Ellefson's life is forever altered as Megadeth is born.

Again, without going into too much track-by-track-by-track information, Ellefson takes the reader through the first couple of Megadeth records, all the while explaining his rather rapid descent from Midwestern farmboy to full-blown heroin addict.  The tours are here, the groupies are here (although without any kiss-and-tell sexploits), and the grit and grime of the underbelly of the heavy metal world is laid bare thanks to Ellefson's candid way of saying, "Yeah, I was there...but I'm not necessarily proud of how I got there or what happened when I did!"

Part of the reason Ellefson is able to present his story in this fashion is because this book is not 100% about that period of his life.  This book is also about the faith that Ellefson credits with saving him from an out-of-control lifestyle of drugs that was pulling him under.  As Alice Cooper writes in the forward for the book, "Sometimes the most rebellious and controversial thing a rocker can do is become a Christian", which is a point that Ellefson goes to great lengths to drive home to the reader, especially when talking about how faith aided him in rehab and recovery from drugs, and how that same faith drove him to create the MEGA Life! Ministries group at his church.  Of course, the book also leads to Ellefson's departure from the band...as well as the inevitable return to the band...and the reunion with an also-saved Dave Mustaine.

Those who are looking for a metal book should have plenty to chew on with "My Life With Deth", and those who are looking for a faith-based book won't find anything overly offensive or off-putting in this effort either.  It is a nice packaging of both worlds told by a man who you sense is truly at peace with himself and where he is in life, whether that is on stage with Megadeth or in church with his MEGA Life! ministries group.

Not a difficult read at all, I recommend this book as a stand-alone and as a companion to Dave Mustaine's own autobigraphy, "Mustaine".  The book skims over some time periods, and if you are looking for an all-encompassing coverage of Megadeth, Mustaine's book would be the better read, as obviously Ellefson's time away from the band limits his input on certain time periods.  That being said, I thoroughly enjoyed the read and would recommend it to any fan of the band or to people who enjoy reading rock n roll autobiographies.

Back To Sleazy Readers
Home
Posted by arttieTHE1manparty at 3:29 PM