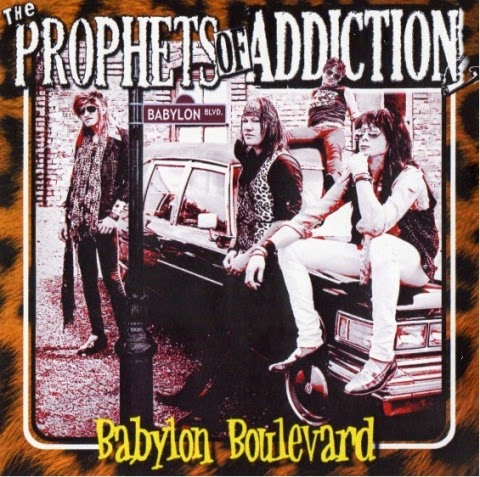 Prophets Of Addiction is the brainchild of former Pretty Boy Floyd bassist Lesli Sanders, but you can stop reading right now if you are looking for music in the same vein as PBF.  Sanders, who also handles the vocals on this raucous debut record, is not here to chase chicks or to have little lighters-in-the-air party.  Nope, he and the boys are here to kick in the door, smash the television, set the couch on fire, drink all your booze, and then leave your house a bottle-and-needle-polluted shell of the home it once was, scaring off the neighbors in the process.  This is not a pretty record, but it is a good one, recalling the seedier side of the Sunset Strip while also incorporating the 70's glam and street rock sound of the New York Dolls and the London sleaze-punk of Tyla-era Dogs D'Amour.

By giving a listen to just four tracks, the listener is treated to four varying degrees of styles that meld together to encompass the Prophets Of Addiction sound.  The opening track, "Hang Me Up" features a very cool 70's guitar vibe throughout the track that screeches its way across the thumping rhythm section in a way that woul dmake T. Rex proud!  Sanders snarls his way through the lyrics in a Taime Downe meets Rach Rose (Erotic Suicide) and Michael Monroe manner. while the twin guitars of Ron and Smash blister their way into your ears!  "Altar Of Altercation" skillfully mixes punk and sleaze in a violent display of angst and attitude, sounding like the Sex Pistols partying with Faster Pussycat, with Mess sounding especially in his element here with his raw, primal drum attack on display throughout.  The title track, "Babylon Boulevard" sounds a LOT like the Dogs D'Amour did in the late 80's, with hints of WASP in the guitars, while album closer, "Where Are You" showcases a band that knows how to deliver a somewhat more melodic, slower song that still manages to grind, rather than glide, across your eardrums in spite of the piano that slips just below the sonic wall of distorted guitars and crashing cymbals.

There are other equally solid songs here, to be sure.  "Trigger" instantly comes to mind, with it's one-take sounding drums and wickedly cool guitar lick setting the pace for Sanders to sneer, "I shot the devil, I took him prisoner, I smoked the devil, now I watch him disappear..." before leading into a dirty guitar solo and some funky bass work.  Also impressive is "Mistress Addiction" with its bluesy, almost jangly musical approach and a GnR-ish solo (the whole song reminds me of the Lies album) that sets it apart from anything else on the record.  This track alone proves that this is not a one-trick pony of a band and that Sanders and Company are more than capable of writing a song that can shift gears on an album without sounding like they are attempting to sell-out to corporate radio.

Originally self-released in 2010, this 2012 re-packaging for Cargo Records has the same track-listing and instrumentation, with only a change in cover artwork, at least as far as I can tell.  The packaging cannot get any simpler, as the Cargo Records version is a single sheet insert with a band photo, album credits, and extremely basic thank-you's from the band.  No lyrics are included here, or on the band's site, for that matter, but Sanders' vocals, while snotty and sneering, are easily enough understood that printed words aren't really necessary.  Besides, this is from-the-gut sleaze mixed with snarling punk and street rock, not some deeply introspective prog rock album, so the delivery and the performance get the point across as well as any words could.

Mixed by former Ozzy Osbourne bassist, Phil Soussan, the record sounds live and dirty, edgy throughout, and not overly rehearsed.  The mix is a bit muddy in spots, but it is hard to tell if that is intentional or not, as the sound fits the image of the band.  I would have liked to have just a bit more bottom end in places, and there isn't a ton of dynamic range here as far as the separation of highs and lows, but with the grit and scum that is liberally applied to so much of this album, it is quite likely that what you hear through your speakers is exactly what you are going to hear live, as well.

Aggressive, angry, filthy, and dirty, Prophets Of Addiction are not the kind of band you are going to pick up on the street and bring home for mother to meet.  In fact, they are the kind of band you are likely going to mistake for a gang and swerve to the other side of the street to avoid!  But after giving a listen to Babylon Boulevard, it is easy to determine that this is exactly how the band wants to be perceived: dangerous but worth the risk, to steal a phrase from Ratt.

Touring across North America in 2014, Prophets Of Addiction is a band well-worth checking out!

Rating:  Not for the feint of heart, but still crank-worthy.  I give this one a 7.5.

Back To Reviews Index
Posted by arttieTHE1manparty at 4:12 PM