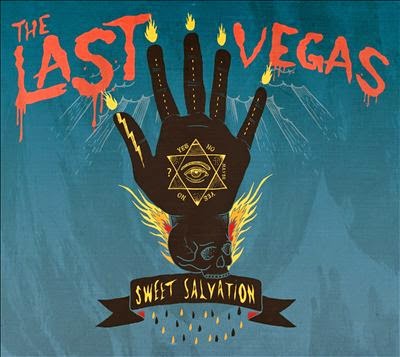 Chicago's The Last Vegas return with their first album since 2012's excellent, but under-publicized, Bad Decisions album.  On the new album, which was fan-financed through Pledge Music, the band takes a bit of a step backward musically.  That is not to say they underperformed, for that is not what I mean.  The skill level and the performances are still there.  When I say they take a step back, I mean back to the 1970's and very early 1980's, as there is a lot of early Aerosmith-meets-Kix influence intermixed with the band's  take on 1980's styled sleaze, a la Motley Crue. LA Guns, and GnR...all seasoned with a bit of Jane's Addiction in places, believe it or not!...which gives the album a bit of a different feel than the last record, but with equally strong results.

One thing that definitely adds to the sound of the band would be the fact that the band has bolstered its roster, now sporting THREE guitar players, instead of the two they had employed since their introduction to the mainstream while on tour with Motley Crue.  I have not yet had a chance to catch this three axe show live, but the results on the record are strong.  I am not sure who plays what solos or if someone is relegated entirely to rhythm playing, but I like the guitar approach taken here and am impressed with the early musical returns.  Welcome to the fold, Bryan Wilkinson!

Chad Cherry seems to be channeling his inner Steve Whitman of Kix throughout much of this record, and does a great job of it at that!  His voice is in excellent shape throughout and he is able to sustain his notes in any range he chooses to sing in.  Since the first time I saw them live, I have thought Cherry had that "it" factor to be one of the great frontmen of this generation, and his vocal performance, both on Bad Decisions and now Sweet Salvation, shows that his singing has caught up to his showmanship, at least for me.

"Come With Me" is the lead single from the record (and second track), and serves to really showcase the direction of most of this disc.  Nate Arling uses some tribal rhythms with his drumming, and I was INSTANTLY thrown to the sound of early Jane's Addiction as soon as Cherry hit the chorus of this record, as all the instruments stop except for a single guitar and some simple cymbal work ringing under his vocals.  After the second chorus, a raucous guitar section powers the track forward, with solid bass work from Mr. Smash pummeling the bottom end of this song.  Just a very cool track that worms its way into my head more and more with each listen.  Definitely a top 3 or 4 track for me here.

"Invincible Summer" is another hard rocking number that finds Cherry using a bit of an Axl Rose approach to his vocals during the vocals, very similar to the style employed on "Sweet Child Of Mine" or "Mr. Brownstone", then kicking them back up into a higher range on the bridge and during the chorus.  With lyrics borrowed from Guns N Roses ("...it was the best time I can remember..."), and Ella Fitzgerald!!! ("...summer time and the livin's easy..."), this isn't your typical rock track, which is part of what makes it so cool.  If you are like me, you will swear you have heard this song before because of the lyrical snippets used here, but the song doesn't come across as a rip-off of anyone nor does it sound dated...all while also being a completely new and original song!  Now that is not an easy feat to pull-off with someone like me who has heard tens-of-thousands of songs from thousands of albums!

"Face In The Crowd" is the lone song on this record that doesn't really have at least one foot firmly set in the 70's groove of the rest of the record.  In fact, "Face..." is easily the most modern sounding track on this record, and a lot of that has to do with the effects used on some of Cherry's vocals.  That being said, a scorching Appetite-era, Slash-inspired guitar solo and sparse-but-solid rhythm playing still drive this hard rocker forward to great effect.

"You & Me (You Never Know)" feels a lot like an early Kix song and maintains a gritty, cutting edge with barked backing vocals and a catchy hook similar to those employed by the Baltimore rockers on their first couple of albums, up through Midnite Dynamite.  In fact, this song seems somewhat modeled after a track like "Sex", with only the harmonica missing!  Not a rip-off at all, but definitely in that same vein, this would be my second favorite track here if I had to put numbers to them.

"Miss You" has a funky sound to it with some 70's styled Hammond organ thrown into the mix, this is an updated take on the classic Get Your Wings Aerosmith sound.

And, if forced to rate them individually, what would be my favorite track?  No questions for me.  "Death Style" is a snotty, sassy track that really epitomizes what I think of when I think of The Last Vegas.  Full of piss and vinegar, the band's attitude on this track is that of a gang, declaring themselves "Apocalyptic, destroyer of towns, I'm always turning the world upside-down!"  This is THE anthem for this band, and I pray it is performed at every show these guys play!  Again, some excellent (and underrated) guitar work serves the song extremely well here, and I imagine this nasty rocker will come off even sleazier and grittier live!  Awesome stuff here!

"Sweet Salvation" brings things back a bit to the smoother sound of Bad Decisions as far as the style goes, but that retro-rock sound is still firmly in place, especially in the tone of the guitars and the simplicity of the drum line.  A great closer for an outstanding album.

With Roy Z overseeing the production, the album has a great feel to it throughout, with nice separation of the instruments, giving each their own voice and room to breathe.  He resists the overproduction that so many records seem to be subjected to these days, allowing the sound of the band to take center stage here, not his idea of what he believes the band should sound like.  With a pedigree of heavier acts such as Judas Priest, Sepultura, and Helloween (to name a few), Roy Z handles a less metallic band quite well here, giving the band the ability to showcase their own style.  Having had the chance to catch these guys live three times, I think this is the most "live" feeling record they have released, and it comes off as legitimate and honest, full of sass and swagger and ready to kick your ass live!

A sleeper hit for 2014, I anticipate a lot of people are going to overlook this band once again, which will be their loss, as this album is easily going to find it's way onto my Top 15 list of the year!

Posted by arttieTHE1manparty at 12:38 PM