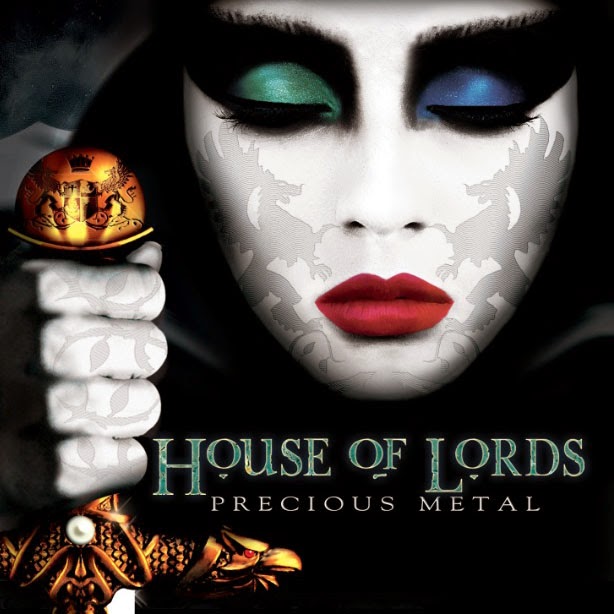 House Of Lords is one of those bands that has always seemed to fly just below the radar of the hard rock world, both its fans and the media.  Sure, people know "Can't Find My Way Home", but most would be hard-pressed to come up with the name of even four albums (and they have release nine now), let alone four or five more song titles.  And the thing is, I'm not sure why they don't get the respect they deserve, as HoL has been one of the most consistently good bands in the genre since the debut album came out 26 years ago, in 1988.

When I say "consistently good bands", a lot of people are going to take issue with that statement, as only singer James Christian has been a member since the band's inception.  However, the current line-up...which also features the amazing guitar skills of Jimi Bell, along with B.J. Zampa, Chris McCarvill, and Jeff Kent...has been together for 10 years and five albums now, which shows more band stability than many current or classic acts.  It has also been during this stretch that I feel the band has enjoyed the most consistent sound in its history, as well, with each album building and transitioning from one to the next.

Precious Metal is the latest album from the current line-up, and it will not throw many curve balls at its fan base.  The material here is pretty much exactly what fans have come to expect:  solid, melodic hard rock with top-notched songwriting, big hooks, catchy melodies, and powerhouse vocals from Mr. Christian.  However, the band sounds as if it decided to make a few minor tweaks to the classic sound, beefing up the "heaviness" on this record and scaling back the keyboards to a supporting role, rather than allowing them to take center stage at any real point in this record.  The results are slightly mixed, although, for the most part, I think the outcome is a very good, very strong record with a couple of tracks that are definitely worthy of inclusion on any "best of" compilation that Frontiers Records may decide to release somewhere down the line (and, yes, I know Cleopatra Records did an Anthology release a few years back.).

The album kicks off with "Battle", which is everything House Of Lords fans have come to expect from the current line-up, with a big guitar hook, complimentary keyboards, and some of Christian's most powerful vocals on the record.  It's a perfect song to set the stage for this album because it eases the listener into the subtle changes I mentioned previously, as the band reigns the keys in a bit and pushes the guitars further out front.  An example of this can be found on the very next track, as the heavier side of the band can be found on "I'm Breakin' Free".  This kick-the-loser-to-the-curb anthem finds Christian snarling about "losing your ass", while Bell supplies some snarl of is own on guitar. "Permission To Die" is full of sass and swagger, kicking off with a bit of a boogie feel to the guitar approach, before the "hey, heys" kick in, and Christian takes over.  "Swimmin' With The Sharks" is another prime example of the band shifting completely into guitar rock mode, as the keyboards are nothing more than a supporting instrument, giving way to the harder-edged rhythm guitars and some excellent drumming and solid bass work.  "Raw" takes a similar stance, as Bell rips through some classic-sounding guitar lines in this pulsating rocker, complete with layered vocals and just enough keyboard work to satisfy those who expect a bit more A.O.R. from this band.

Slower material is also included, as is to be expected, but it is found in a couple of odd places.  I will be the first to admit I had ZERO clue that the title track would be a ballad.  I mean, come on..."Precious METAL"?  But, make no mistake, this is definitely a ballad of the first order.  Acoustic guitar leads things in, with a slow, subtle keyboard build that takes the song to the first chorus which showcases Christian's ability to still climb the vocal scale to reach some higher-ranged notes.  The other "ballad" on this record is more of a slower-tempo rock number, as "Live Every Day (Like Its The Last)" really doesn't slow to the point of a traditional ballad.  No matter, as the message is a solid one and Christian's mastery of his vocals is really put on display here, as he once again effortlessly runs from one end of his vocal range to the other.  Bell supplies a very good guitar solo here, and the keyboards are all but undetectable here, with the rhythm section being all the support the song really requires.

One song that really sticks out is "Enemy Mine", which features Christian dueting with his wife, Robin Beck.  To say this is a quirky song would be an understatement.  There are all sorts of weird electronic elements going on here, including what sounds to be the use of an auto-tuner on some of the electronic vocals.  Beck's vocals are equally as powerful as Christian's, and the interplay between the two is solid.  I like the song, I just don't know if it's a House Of Lords song as much as it is a James Christian or Robin Beck solo album song.  It definitely stands out here, but I think it actually disrupts the flow of the album to some degree.  I don't skip it, but I will admit that it throws me for a loop whenever it first kicks in.

"Action" gets things back on the hard rock track after that little oddity, and really the band never slows again.  "Turn Back The Tide" starts off mid-tempo but builds quickly into a classic House Of Lords song before the album closes with what I think may be the best track on the disc, "You Might Just Save My Life".  A solid arena rocker, this track has a powerful, catchy chorus, some cool vocal tricks, and a driving rhythm that will have your head banging and your fists pounding on the steering wheel as you cruise along, anticipating the big guitar solo which absolutely does not disappoint.  A killer closer to a more-than-solid effort from a great band that I wish would get more recognition.

Precious Metal continues the tradition of solid melodic hard rock albums to come out from the current version  House Of Lords over the past ten or so years.  Fans of the band are going to be very comfortable with what they hear, and many are likely to include this in their Top 4 or 5 of all time from this great band.  Newcomers to HoL will find themselves encouraged to seek out the back catalog after a stellar intro to the band with this latest effort.  A frequent player for me, and one that I am sure will continue to gain spins for years to come.

Rating:  Crankable, as is the case with all House Of Lords releases.  Crank this one to a 7.5.

Posted by arttieTHE1manparty at 3:35 PM