HELIX "Bastard Of The Blues" 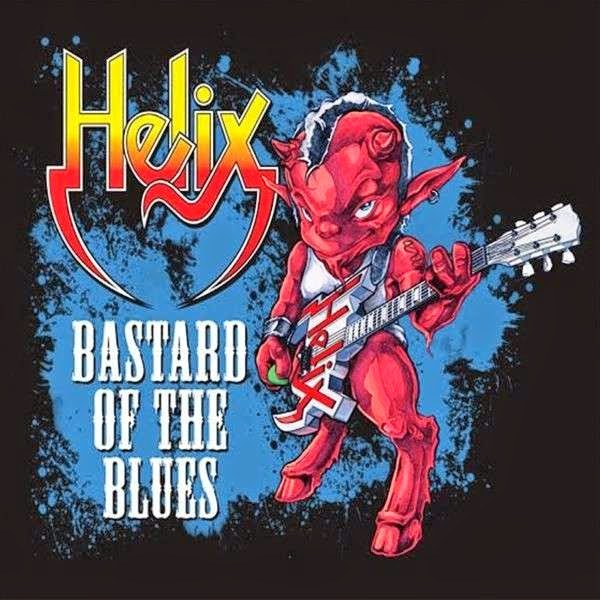 Where has this album been for the past 25 years?!  Seriously!

For the uninitiated, let me give you a bit of a background on the band.  Helix is a hard rock/metal band from Canada that has been around in one form or another since 1974.  (That's 40 years for those of you doing the math in your head!)  It wasn't until the early 80's, however, that Helix really garnered any notice outside of Canada, starting with their first major label record, 1983's No Rest For The Wicked, and their first real successful single, "Heavy Metal Love".  In 1984 the band released Walkin' The Razor's Edge, which included their best-known song, "Rock You", and in 1985, the band rounded out their strongest stretch of albums with Long Way To Heaven, which included the MTV hits "Deep Cuts The Knife" and "The Kids Are All Shakin'".  1987's Wild In The Streets was a decent album as well, but the band had started becoming to slick, too poppy, for my tastes, and I lost interest after this record.

Despite the lack of commercial success after Wild In The Streets, the band (which was primarily sole-remaining original member Vollmer, major 80's members Hinz and Gray, and a revolving cast of musicians) continued on, releasing 7 more studio albums (including Bastard...), a Christmas album, a couple of EP's, 2 live albums, an acoustic album, and numerous best-of compilations.  All of these included a track or two which came close to recapturing the magic of the 82-87 stretch, but there was usually a little too much attempted humor, too many filler songs, weak production, and other glitches that kept the band from ever reaching their peak again.

With Vollmer bringing Hinz and Gray back into the fold for 2009's solid, if unspectacular, Vagabond Bones, the band started to gel once again.  With the addition of Duck on lead guitar, and Julke on rhythm guitar, the band has once again found the right musical combination to put out what I feel may be the most solid album of the band's long, storied career!

Things kick off immediately with the blues-drenched hard rock of the title track, which finds Vollmer's trademark rasp right at home alongside some skillful playing from Duke and Julke, respectively, as well as some excellent keyboard work from Gray, and powerhouse backing vocals from Cheryl Lescom.  This track, while not typical of the Helix of the 80's, definitely finds the band clicking and comfortable throughout this mid-tempo scorcher.  With all honestly, I was pretty shocked with what I was hearing after just one track.

The pace bumps up just a bit wit "Even Jesus (Wasn't Loved In His Hometown"), a sneering, cynical swipe at the band's hometown of London, Ontario.  Once again, solid guitar work really lays the foundation for this rocker, giving Vollmer the platform for his still-strong vocals (perhaps his work as a vocal instructor has something to do with his continued skill where others have struggled in recent years).

"Winning Is The Best Revenge" takes a tiny step back for me, largely because it sounds like something that would have made its way onto the band's more slickly polished fare from the early 90's, like the Back For Another Taste album, which really didn't do a lot for me.  The track isn't a skipper, necessarily, but it definitely isn't my favorite.

The band cranks the harder edge back up with the next two tracks, "Screaming At The Moon" and "Metal At Midnight", both of which are excellent tracks.  These two, along with "An Axe To Grind", all have the same style and sound as the band's biggest 80's hits and would likely have been huge back then...or now, if any radio supported hard rock of this style today.  I'm guessing Europeans fans will eat these tracks up as they are used to being fed a steady dose of solid melodic hard rock.  "Hellbound For A Heart Break" is another quality hard rock number that builds upon the band's past glories, sound-wise, in a song about gambling addiction.

"When All The Love Is Gone" reminds me a lot of "Dream On" (the Helix song from Wild In The Streets, not the Aerosmith classic), but it goes into territory not previously mined by the band, as it is Gray, and not Vollmer, on lead vocals.  Gray is more than competent, using a lower tenor range than Vollmer does, and singing in a smoother style than the gravelly snarl that Vollmer often incorporates.  While I wouldn't want too many songs of this style to be included, this is a nice little change-of-pace that I have to admit to liking pretty well.  It will never replace "Deep Cuts The Knife" as the big Helix ballad, but it isn't a skipper, either.

Tracks 9 & 10 are songs that originally appeared on the Skin In The Game EP, and, quite frankly, are the lower points on the record for me.  This isn't because they are bad songs, necessarily, but because they don't completely fit the flow of this record.  Maybe this is just a personal thing, but I would have rather had one new song than two previously done tracks.  Again, not a huge issue, but it does take my feel for this album down a tick or two.

The album closes with a rollicking bluesy number, "Sticks & Stones", which has a definite 70's era Aerosmith feel to it.  I swear I have heard this song elsewhere, but danged if I can find the original if I have.  It's a good track and a nice closer to a great album, overall.

This album sounds like it would have been the logical follow-up to the band's most successful stretch from the early-to-late-80's; it is that good.  If you have EVER been a fan of Helix, you absolutely must pick up this complete surprise of an album and crank it immediately!  These Canadian hard rock legends are far from dead, and Bastard Of The Blues is all the proof you will need!