HINDER "When The Smoke Clears" 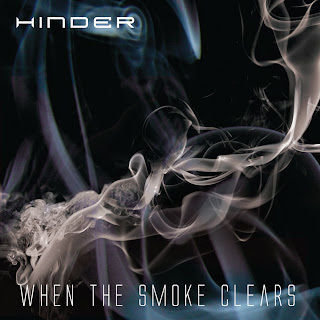 Oklahoma rockers, Hinder, return with a new album, a new record label...oh, and their third new singer since their last album, Welcome To The Freakshow.  That's a lot of new for one band to tackle in one album, and, quite frankly, I was curious how one of my favorites from the modern hard rock crowd would handle all the change on When The Smoke Clears, which seems to be a rather fitting title considering the implosion the band seemed headed for following the departure of Austin Winkler.

For a brief recap of the past three years, here we go:
Got all that?  That truly is a lot to take in roughly two and-a-half years, and there were a lot of people who wondered if Hinder would ever record again, or simply become one of those bands that shows up at festivals...or your favorite bar...from time-to-time.  And, honestly, after struggling through a lot of the less-than-great ...Freakshow album, I really didn't know if I cared all that much.  I like the band...a lot...but I seriously wondered if the band was done.

While When The Smoke Clears won't supplant All American Nightmare or Take It To The Limit as contenders for the best album in the band's catalog, it is certainly a better album than ...Freakshow, and while the test of time will determine how it holds up, I would say that at this time, I actually prefer it to Extreme Behavior.  To say that I was more than pleasantly surprised would be an understatement!

Things kick off on a bit of a down-tempo note, and I, like a lot of Hinder fans, I would imagine, took a deep gasp and waited for the worst as "Rather Hate Than Hurt" starts off with, *gasp*, a PIANO, some gentle cymbal and bass work, and new vocalist Dutton crooning in a smooth-yet-emotive tenor about being "sick and tired of bleeding from picking up the pieces, so I let 'em fall down...".  What the heck is going on here?!  Where is Hinder?!  I didn't have to wait long, however, as the guitars and Cody Hanson's thundering drums kick in with the rocking chorus and Hinder makes it's return in full-blown rock mode!  Throw in the first of several strong guitar solos on this album and you have the makings of a solid rock anthem that I am certain will find itself on Hinder setlists all summer long.  While a bit of a shock to the system at first, this is actually a great song to get Dutton's feet wet on, as it allows him to go through the full range of dynamics with his voice, from quieter moments to much more amped up segments, all encompassed in the same song.

The re-recorded version of "Hit The Ground" has just a hint of Bon Jovi-meets-Nashville to it, although it rocks harder than anything the Bon Jovi boys have even attempted in several years.  While obviously a stab at radio in an attempt to get the band some much-needed airtime (...Freakshow did virtually nothing at radio for the band), it is still a solid track, if not my favorite.

Speaking of Bon Jovi, Dutton channels his inner JBJ on the first real ballad of the record, the boy-steals-girl-for-one-night-stand number, "If Only For Tonight", which would actually fit pretty well on that band's Keep The Faith record.  This is NOT a bad thing, folks, as Hinder sounds very comfortable here, reaching backward stylistically and not going forward into the electronic/dub step/pseudo techno trends that so many bands seem to be aiming for.

"Intoxicated" is a snarky, sassy rocker that leads well into one of my three or four faves here, as the angry mid-tempo rocker, "Dead To Me", reminds me so much of the best parts of Take It To The Limit with its "you hurt me but I'm already over you" attitude.

"Foolish Eyes" is an okay number; nothing spectacular, but I can see plenty of cowboy hat-wearing-rocker chicks with beer bottles hoisted high as they sing and sway along with this song at festivals and county fairs this summer.  It's got that simplistic summer kinda song feel to it, with just enough country mixed into the rock to make it accessible to a wide listening audience.

"Nothing Left To Lose" feels like it could have been a left-over from the Nightmare album, as it has that same angry, gritty, punchy feel to it and it is definitely one of my favorites from this new record.  It opens in a very similar manner to "Waking Up The Devil" from Nightmare, which possibly makes sense, as the band claimed to have written between 50 and 70 songs for that record before whittling it down to the final 12.  Perhaps this one would've been number 13 if it didn't have so much in common with another track that had already made the record.  Regardless, we are again treated to some cool guitar work (would've liked a longer solo, however), tight drumming, and an overall great performance that I am very happy was included here.

"Letting Me Go" starts off with just a piano and Dutton, but don't be fooled into thinking of this track as a ballad, as this song is largely a mid-tempo rocker throughout.  The lyrics aren't particularly deep, even bordering on the cliche, with a chorus that includes "Tell me why I'm holding on to someone who's already letting me go".  The music makes up for the lyrical weaknesses, however, and dang it if the song is sing along catchy, to boot!  Not the highest point on the record, but definitely not terrible, either.

Speaking of not overly deep, "I Need Another Drink" is a decent way to close an overall solid record and an unexpected return to form for Hinder.  Starting off with a southern rock guitar intro, the song has a hard-rocking shuffle feel to it, and I could hear this as the last call theme for many a rock bar across the midwest with it's simplistic chorus that lays it out simply..."I need another drink!"

The only song I would say I really don't care for is  "Wasted Life".  The song is just dumb and seems to exist simply for the band to throw as much profanity into a song as possible while also putting little in the way of thought and originality into the track.  It's not that I'm a virgin-eared prude who shuts off anything I hear that drops an f*bomb or anything like that, because I'm not.  But there is just no real reason for this song's lyrical approach, in my opinion, and it just isn't that catchy.  I'm sure someone loves it, and more power to them.  It's just not my thing.

The production is pretty good, with the mix being very clear with nice separation of the instruments here.  The one problem I have with it is there is not a lot of bottom end to the mix for some reason. I thought it was my computer set-up at first, or perhaps the digital download I originally listened to, but the CD version sounds the same in my Tahoe, so I'm guessing it is just the way it was recorded, which is a bit of a bummer.  Vocally, Dutton is put right out front, thrown directly into the fire and not buried under the instruments here or made to sound like Winkler through production tricks.

The packaging is about as budget-efficient as it gets, as this is a single-fold slipcase...not even a digipack...which always has me worried about the disc's health down the road.  There are liner notes and pictures included in the booklet, and the quality of the included notes and photos is good, even if the packaging itself is not my favorite style at all.

Considering how little I was expecting, I have to say I am really very pleasantly surprised with When The Smoke Clears.  And, as a big fan of Winkler's, I can also say that I am anxious to hear what Dutton sounds like live, mixing these new songs into the band's catalog, giving the old material some new life without turning off the remaining fan base.

Rating:  Definitely worth picking up and checking out.  Crank this to 7.5.

Back To Reviews Index
Posted by arttieTHE1manparty at 12:15 PM