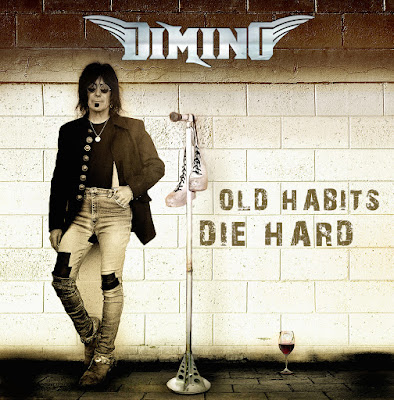 Every now and then, I get releases that completely seem to come out of left-field, totally unannounced, and 100% unexpected.  DIMINO did exactly that for me when it was sent to me for review, and this was for a couple of reasons.  First, the album is over a year old (didn't know that when I got it), and was just NOW sent to me.  Second, I hadn't heard ANYTHING from Dimino since his days in Angel, although I had heard he has made an appearance or two with the Sin City Sinners out in Las Vegas.  Other than that...nothin'.

Then Old Habits Die Hard shows up out of the blue.  And, I have to say, I'm actually pretty glad it did!

The first thing that most people will grab onto is the fact that this is essentially Dimino with an all-star backing band, of sorts.  Not only does he have a total Who's Who of guitar players on board here, but even his "band" is a bunch of recruits from Meat Loaf.  Secondly, with the addition of Punky Meadows as a guitar player here, there are likely to be those who wonder if this record will sound anything like Angel.  The answer is a short, sweet, but emphatic...NO.

One thing to note immediately is that Dimino has brought his vocal range WAY down from the rafter-scraping heights it sometimes reached in Angel.  Yes, he can still belt out a pretty good, high-pitched scream, as evidenced in "Sweet Sensation", for example, but on this record, Dimino uses a much more blues-based, mid-range tenor than the falsetto some people will remember him for from the 70s with Angel.   Think of the range of Biff Byford from Saxon, Dave Meniketi from Y&T, or possibly David Reece from Bangalore Choir/Accept/Tango Down as far as where his vocals tend to center themselves pitch-wise.

What we have here is a nice collection of bluesy hard rock that runs the range from galloping rockers, like the album opener, "Never Again", the straight out of the 80s metal scene, "Rockin' In The City", to the amped-up, hard-charging "Mad As Hell", which reminds me musically of a classic mid-80s Y&T.  All really, really good stuff that had me grinning from the get-go, but nothing even remotely Angel-esque in its approach.

In fact, a lot of this record has a solid 80s-era Y&T feel to it, which may be why I find myself digging it so much, as Meniketti and Co. has long been a Top15 band for me.  Take the previously mentioned "Sweet Sensation", for example.  We have some really good, hard power chord rock here, a soulful-yet-edgy vocalist who can let a wail rip when he wants to, a conservative use of the organ in the background, all running atop a simple bluesy rhythm section with a nice hook and a fairly impressive guitar solo.

"Tonight's The Night" liberally borrows from "Johnny B. Good" in its guitar approach on the intro and leading into hyper-simplistic chorus sections, and is a fun, if not overly memorable, rocker that flashes one of the catchier guitar solos on the record.

For those who are looking for a bit of 70s nostalgia, there are a couple of songs that will likely fit the bill.  "Tears Will Fall" has a definite 70s classic rock sound, but it has more in common with Rainbow than Angel, in my opinion, both musically and vocally.  "The Quest" is going to be another nostalgic choice here, and it is done very, very well and is probably my second favorite song on the record.  The driving guitar riff and harmonic solo, the excellently integrated Hammond in the background...and then on a solo of its own...the layered "dreamy" vocals on the bridge, and the simple-yet-sharp drums all hearken back to a time when Angel was making it's cult presence know, but Angel, this is not, as once again, Dimino's vocals are huskier and, dare I say, more powerful than they ever were in Angel.

Album closer, "Stones By The River" starts off with a really cool blues rock riff and a simple kick drum leading in a song that has something of an old time gospel song feel to it.  Once again, Dimino's vocals are directly in their wheelhouse here, as his new bluesy rasp fits perfectly on this slower, more laid back number.

Dont' go into this album expecting a resurrection of Angel or that style, and I can pretty much guarantee you are going to love it, especially if you love blues-based 80s -era hard rock (NOT hair metal) like Y&T, Whitesnake, Deep Purple, etc.  However, if you are looking for a throwback to the Angel days, you are bound to be sorely disappointed, as this is NOT the record for you.

Rating:  Really good stuff here.  Crank this up to 8 and let the rocking begin!

Back To Reviews Index
Posted by arttieTHE1manparty at 6:23 PM