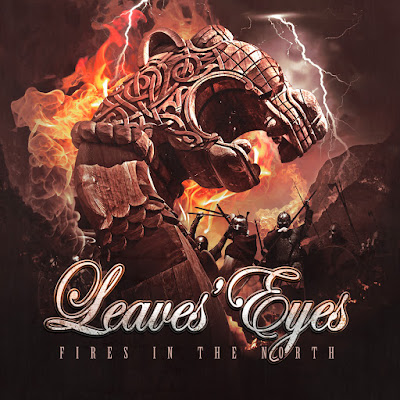 I seem to be getting a lot of epic symphonic power metal for review lately, and Leaves' Eyes definitely falls into that category.  I know absolutely nothing about the band, but apparently Siirala is a new vocalist for the band, so to introduce her to their fan base, Leaves' Eyes decided to record one new song (actually two versions of a new song), and also have Siirala sing a couple of the band's older songs on this new EP, Fires In The North.

The new song here is the title track, "Fires In The North".  Musically, the band is not completely unlike most symphonic metal bands, to be honest.  Again, I am not overly well-versed in these types of bands, but there are a lot of big, sweeping guitar runs and huge drums here...including some very cool tribal-sounding drums at the opening of the song...much the same as I have found with bands like Rhapsody Of Fire, for example, who I do have some familiarity with.  What is different with Leaves' Eyes, however, is the juxtaposition between the clean, operatic vocal style of Siirala, and the harsh, gutteral, deathy vocals of Krull.  To hear Siirala utilize a powerful soprano vibrato for much of the verse, only to have Krull come snarling in underneath is quite a contrast in styles, and one that I was surprised to find myself enjoying quite a bit.  The theatrics that are created with this interplay are something I am definitely not accustomed to, but it is something that I feel I may need to explore a bit more.

The second track is an acoustic re-working of "Fires In The North", but the feel is quite a bit different.  Originally, I figured this version was simply to be used to showcase the strings that are used as supporting instruments on this track, and to give Siirala a cleaner musical environment to allow fans to get a better idea of what she is capable of.  However, after several listens, I find that I actually enjoy this version more than the "metal" version, probably because the supporting instrumentation and the group vocals here add a depth to the music not present in the beefier version.  Alexander's gruff vocals are limited to mostly some interjected shouts before the chorus sections, and Siirala tackles pretty much all of the remaining lead vocals herself, but the backing vocals are really enhancing to this presentation of the song, and there is a much more atmospheric feel to the song here, with the tribal percussion I mentioned earlier really coming through on this version.

The last three tracks are all re-recordings, as is evidenced by the band labeling them as "2016 versions".  "Edge Of Steel" is probably my favorite here, as the rhythm guitar work is really solid here and sets an aggressive pace right from the start, and the drums keep a strong cadence throughout.  It sounds to my ear like there may be some bagpipes and other strings intermixed in the background, along with some supporting keys (I'm assuming from Krull), but I only have a digital review copy, so additional musicians are not listed in my notes.  Once again, Krull is an integral part of the overall sound with his harshly barked vocal lines, which really serve to enhance the beauty and power that Siirala brings to the track.  The other two remakes are solid as well, with "Sacred Vow" using some rather dynamic tempo changes to drive the song; in the faster sections, Nijenhuis powers the song through some high-speed double kick work, with Bauer rumbling right along with him on bass, with some nice string sections (again, uncredited) and big backing vocals scattered throughout the slower, more melodic portions of the song.  "Sword In Rock" starts off in a jig-like fashion, like I have heard Blind Guardian do before, and I imagine the Hobbits dancing around in Tolkein's "Return Of The King" movie.  It isn't long before the guitars and drums come crushing in, but Siirala continues to sing along in a vocal pattern that matches the jig intro, with Krull barking some power into portions of the verses.  Again, not knowing what to expect, I found myself rather enjoying this song.

The bass seems to be a bit low in the mix for much of this EP, but not being an expert on this style of metal, perhaps that is by design.  It's there, but not as prominently as in other genres.  The guitars are powerful and huge, and the drums of Nijenhuis are a definite force to be reckoned with.  But it is the dynamics of Siirala and Krull that really set Leaves' Eyes apart from other bands of this ilk that I have encountered, and I am definitely impressed.  I am somewhat tempted to check out the back catalog of Leaves' Eyes to hear what the old vocalist sounded like, but I also don't want to ruin my current opinion of the band by comparing Siirala to the old vocalist, whom I have read is actually Krull's wife (ex-wife?  I don't know...), Liv Kristine.  Additionally, I have been told that long-time fans of the band are rather torn on this EP and the new singer, so I may wait until there is a proper full-length of new material with Siirala before I make a comparison of the two versions of the band.

As it stands, I found myself liking this EP quite a bit.  It's not world-changing for me, and I haven't become a big symphonic metal fan simply because of Fires In The North.  However, it does what I imagine the band intended for it to do: it has sparked my interest in the band and has made me curious about what the band has in store next.

Rating:  I'm going to crank this to 7 and wait to hear what the band comes up with next.

Back To Reviews Index
Posted by arttieTHE1manparty at 12:08 PM