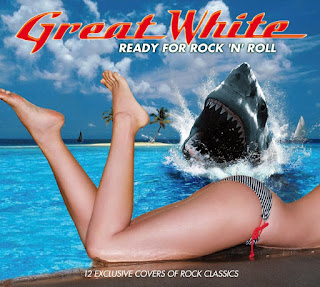 Ready For Rock N Roll is an interesting "studio" album in the catalog of Great White for a couple of reasons.  The main reason for my labeling this an interesting album is largely the lore behind the album, which is pretty cool.  As the story goes, this entire album was recorded live in the studio on a two-track recorder in November of 1989, presumably between ...Twice Shy and Hooked.  Now, if this is, in fact, a legit, straight-to-tape live studio recording, you have to give it to Great White, because it is a really, REALLY good covers album.  Jack sounds particularly strong here, running his vocal range all over the place, including some of the highest notes he has ever sustained on record.  Kendall and Lardie are also spot-on with their axe work here...heck, the whole band sounds very polished and tight here.  Of course, this is when the band was at it's peak as far as popularity, airplay, touring, etc., so perhaps these are songs they regularly played as warm-ups and soundchecks, which would explain why they are done so well. I have an issue believing this is just the band noodling around in the studio, however, because Clarence Clemmons just happens to be there are the same time and agrees to jam on "Down At The Doctors"?  Hmmmm,,,,,

The other thing about this album is, like so many other post-breakup records by Great White, it has been reissued to DEATH!  This album, including this current version, Ready To Rock N Roll, has been reissued no fewer than five times.  In 2002, Cleopatra/Deadline put out this version, called Recover... 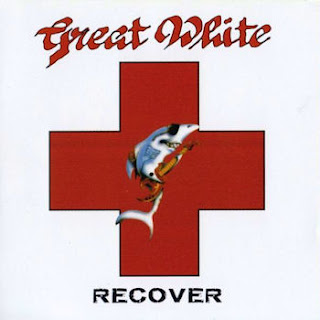 ...and then they reissued their own album a couple of years later with a second disc of covers from other albums and compilations, that looked like this.... 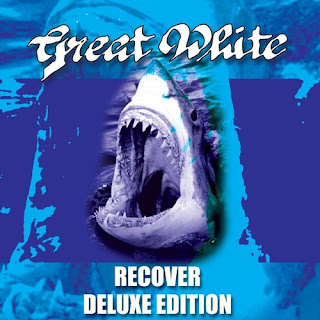 France's Axe Killer label released it that same year, calling it The Final Cuts (which, chronologically isn't even remotely true...), but it looks like this... 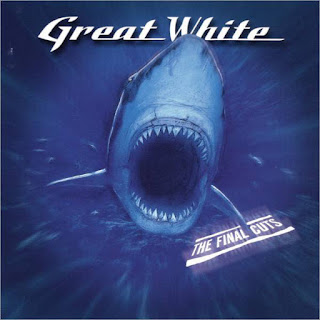 ...and it has a different track order.

Mausoleum Records put out their version, Revisiting Familiar Waters, in 2003 looking like this... 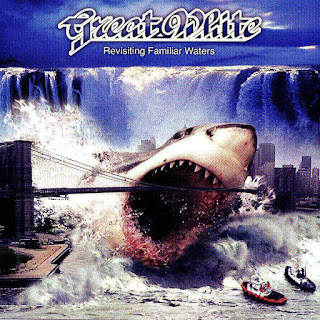 And in 2004, Horizon records released the album with the horribly distasteful name Burning House Of Love. Apparently growing a conscience (or perhaps bowing to legal pressures, I'm not sure), Horizon changed the name to Love Removal Machine...and released it again, with no changes other than the wording at the bottom. 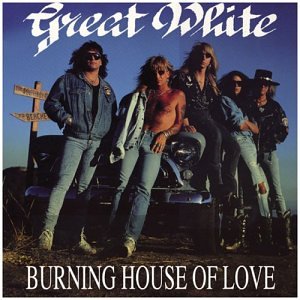 Again, they ALL have the same songs, in general, just in different orders or with additional songs from other sessions mixed in.

Personally, I own all of them, including Burning House Of Love, and I can tell you there is very little, if any, difference in the sound quality from label to label.  The Ready For Rock N Roll version from 2013 is perhaps the cleanest sounding, but that could all be in my head, owing to the fact that this album first surfaced 15 years ago with Recover, so my mind might automatically assume newer technology makes it sound better.  I'm probably just crazy.

I think the song selection here is great, with my favorite tracks being the AC/DC's "Sin City", The Cult's "Love Removal Machine", which Jack absolutely OWNS on this record, Q5's "Ain't No Way To Treat A Lady", which sounds far better in the Great White version, and "Tangled Up In Blue", a Dylan song that the band has done an excellent job with.  I also like Badfinger's "No Matter What", and it's no surprise that Jack owns a powerful classic rocker like "Burning House Of Love", which really lets him drop down to the lower ranges of his vocals, although its understandable why many fans (and band members) likely never want to hear this chillingly ironic song ever again.  Other tracks are not quite as top-notch...such as "Bitches And Other Women"...but I'm not a Stones fan, nor am I a fan of this song in general, and "Again and Again", while well-done musically, is just too repetitive for me, in any form.

All in all, this is a covers record, plain and simple.  The backstory makes it a curiosity, the fact that it has been reissued so many times makes it a cash-grab by any number of labels.  But, obviously it must sell well or labels wouldn't bother going to the time to press it, which I think may speak to the quality of the recording.

If you want to hear a very strong vocal performance from Jack Russell, and you want to flash back to a time when the band members were still all friends and on good terms with each other...and if you like covers records...then you should absolutely pick this album up, in one of its numerous forms.  Unless you are an absolute die-hard collector, such as myself, there is really no benefit to owning all the various versions of this record, so I'd stick with Ready For Rock N Roll, or, if you're looking for more band for your buck, Deadline's reissue of their own album, the Recover Deluxe Edition may be the way to go.

The packaging is extremely simplistic, so as to maximize profit potential, with this particular version being a simple digipack with a three paragraph mini-bio, the track listing, and band line-up.  No more, no less.  There's not even a band photo.

Enjoyable?  Absolutely.  I listen to it frequently.  A must have?  No...but is ANY covers album a must have, really?

Rating:  I honestly say crank it for its musicianship and its not done-to-death choice of material.  Crank this to 7.

Back To Reviews Index
Posted by arttieTHE1manparty at 7:28 PM