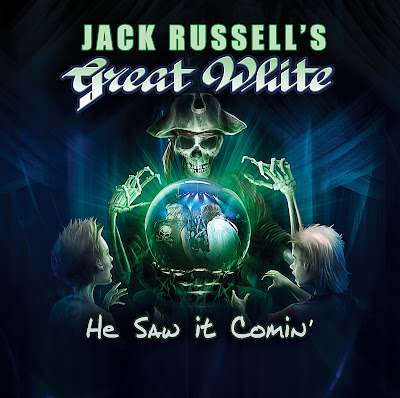 I have promised myself that I am not going to allow this review to become a rehashing of the Great White breakup, the Station Nightclub Fire, or which version of the band is the "legitimate" one (my opinion is rather well-documented, anyway).  Nope, this review is going to focus solely on He Saw It Coming, the new release from Jack Russell's Great White.

One of the first things people are likely to notice and ask about (other than the... ahem...interesting cover art) is the fact that "Hard Habit", the digital single the band released in 2014 is not on the album.  I was curious about this, as well, so I asked long-time guitar player, Robby Lochner what the deal was.  He stated that the song not being included as an album track was simply "because it came out so long before" He Saw It Comin', but he then went on to explain "it will be on it as a bonus track", referring to physical copies of the record, although it is not clear if this is only on import versions at this time.  (My review copy was digital, so that would explain why it is absent.  For a review of the song, go here)

So what about what IS on the record?  Well, as I have been telling people on Facebook, Twitter, and in my social circle, if you are expecting ...Twice Shy II, you are going to be pretty surprised by how far off the mark your expectations are.  This is NOT a rehashing of old Great White material.  There are no re-writes of past glories or near-misses here.  This is Jack Russell's Great White, and perhaps more than at any time since the separation of the band has it been made evident that Jack Russell has a different vision for where the band should go and how it should sound.  Lochner told me, "The idea is an album experience, take people on a journey".  To that end, I would say that  Jack Russell's Great White has succeeded.

Now, before you get all concerned that we're talking about a country record or some sort of auto-tuned synth pop album, have heart, as there is still plenty here to please long-time Great White fans.  There are songs here that operate very much in the same stylistic range as the band was working in on later releases like Can't Get There From Here, Back To The Rhythm, and Rising.  "Sign Of The Times", "Love Don't Live Here", and "My Addiction" will more than satisfy the cravings of the die-hard, old-school Great White fan, as will "Hard Habit", however it is incorporated into the record.  The songs mentioned here have the majority of the moving parts one would expect from classic Great White.  "Sign Of The Times" is a cool rocker that actually sounds like it could have come from the highly underrated album, Let It Rock.  The song finds Jack lamenting the way people bury their faces in their phone screens and modern technology and don't actually connect with each other any longer, all set over a thumping backdrop of solid drums, nice, heavy bass work, and hard-edged guitar work.

"Love Don't Live Here" is a track that long time fans are going to grab hold of instantly, as the bluesy, smooth, soulful vocals that Jack has come to be known for throughout the past 30 years are really given a chance to shine.  Not really a ballad, but definitely a slower number that fits so well into the string of broken-hearted songs the band generated throughout their storied career.

"My Addiction" turns the energy back up, as this straight-up autobiographical song from Russell, is  delivered with Jack's sassier, snarlier vocal side taking the lead, and Lochner supplying a tasty up-and-down the frets run on the solo of this rocker.  Also likely to tickle the fancy of long-time fans is "She's Crazy" , a funky rocker with some definite swagger to the rhythms and some of the catchiest harmony vocals to ever grace a Great White album.  Think something along the lines of the types of harmonies often employed by a band like Extreme and you have an idea of what I am talking about here.

There are also songs that, while still classic rocking in approach, don't fit the "classic Great White" particularly.  There's the extremely catchy...and equally quirky...title track, which takes on a decidedly Alice Cooper meets Queen vibe following a rather odd intro.  This track also has one of the coolest lyrics, with Jack opining, "America loves idols, they build them up to watch them fall..." on this track about not giving up on your dreams. "Blame It On The Night" is another rocker that Mr. Cooper would likely lend his vocals to, had he penned it.  In fact, Russell actually does a rather good Cooper impersonation here, especially when he uses the lower end of his vocal register here, really bolstering verse theatrics when he snarls out "Under the covers...hiding from the monster...", for example, on this song about child abuse.  Easily one of my favorite tracks on the record musically (its a pretty tough lyrical subject...), "Blame It On The Night" also has some nifty guitar work from Robby Lochner, once again, which for anyone who has seen the band live, should come as no surprise, as he is a truly gifted musician.

Speaking of the guitar player, I should mention that Lochner goes off on an absolute string-shredding tear to open up the high-energy rocker, "Spy Vs. Spy", which has an equally scorching solo as the song exits a cool downshift in tempo right before the last chorus.  Feeling every bit as James Bond-ish as the title would imply, this is another of my favorite tracks on the album simply because of the fun feel and the way that Lochner is allowed to explore his inner shredder.

Ballad-wise, of course Jack Russell has something up his sleeve, but it's a bit different than you may be expecting.  "Anything For You" starts off sounding like an old phonograph recording, with just Jack and Lochner's acoustic guitar setting the tone before the deliberate static clears up and a bit more bottom end is added to the still-acoustic track that finds Russell singing about lasting love, and not love gone wrong, as he has done so often in the past.  Lochner showcases some excellent acoustic string-bending on this song that is not completely unlike the all acoustic efforts of Mr. Big or Extreme in the past, complete with the big, layered backing vocals and some really nice, subtle orchestration in the background.  A touching, emotional song, to be sure.  "Don't Let Me Go" plumbs somewhat slower territory, also, but is probably not a true, pure ballad, although it does remind me of a 1960's, Hawaiian-themed movie during a slow dance scene, with its island-esque instrumentation in the background and a simple, swaying rhythm.  Again, Lochner finds the perfect solo approach to really enhance the track here, not trying to blow anyone away with a blazing fret run, but instead offering up a crisp, clean, tasteful solo

And then there's the completely out of left-field tracks, such as "She Moves Me", which finds Russell rapping...yes, I said "rapping".  Granted, this is on a tiny section of the track and features a far more laid back, rhythmic spoken word approach than a straight-outta-Compton-gangsta approach, but I'll admit I was taken completely aback when I first heard that section, but the infectious groove of the bass line, Jack's silky smooth approach to the chorus, and the overall song structure really make me like this song, overall.  There's also the album-closer, "Godspeed", which is a modern take on the Do-Wop sound, with absolutely no instrumentation other than some beat box vocals supplied by Dicki Fliszar (who, according to Lochner, also supplies the high ends), a vocal bass line supplied by...well, the bass player, Dan McNay, and unsurprisingly, Lochner himself supplies the vocal guitar lines.  Again, I really didn't know what to think about this song when I first heard it, but after repeated listens, I find myself really liking it, although it isn't going to slip onto any "favorites" compilation I'd make.  But the listener should really give it a fair chance and truly appreciate the vocal acrobatics that are going on in the background of this song while Jack sings along over the top.  As a music fan...not as a hard rock fan or a Great White fan, but as a MUSIC fan...I have to admit to being extremely intrigued by this song (which both of my kids also really enjoy, by the way).

One of the overall lasting impressions I get when playing this album is that this is a band just having a blast while they are playing.  Jack has stated that having Tony Montana back in the band has been a bit of a musical jump-start for him, as Montana "was a catalyst for moving forward.  I was never as close to him as I am now.  We never had the opportunity to write music together before.  I also never knew he played guitar before."  That jump-start I mentioned is all over this record, and it carries across to the other members of the band.  I told people when I saw JRGW a while back that everyone seemed a bit more energized now that Tony was back in the fold, and it is apparent that energy has carried over to the recording process, as well.  When I asked Lochner about his impression of the fun and energy on the record, he simply stated, "Definitely a blast!"

The musicianship on this record is also top shelf, with Lochner really stealing the show in several spots on guitar, and just enough keyboard usage to help add texture to several songs without dominating and changing the overall song dynamic.  There are equally impressive contributions from Fliszar on drums and some really cool bottom end provided by the band's newest member, Dan McNay, as well.  And, as previously mentioned, the way the band comes together as a musical unit vocally is amazing, especially where a song like "Godspeed" is concerned.

But, it would be an injustice to close this review without mentioning the strength and power of Russell's vocals on this record.  Whether its the wide range of styles and ranges he employs on his lead vocals, or the intricate work he (along with Lochner) applies to the backing vocals, it should be evident to the listener that Jack is, indeed, back, and he hasn't lost a vocal step.

If I have any complaint at all, it would be the album cover which...well...I don't like it.  At all.  Let's just leave it at that.

I truly hope the band incorporates several of these songs into their live set, as I think "Sign Of The Times", "He Saw It Coming", "Spy Vs. Spy", and "Love Don't Live Here" would all slide almost seamlessly into the massive catalog of Great White classics.

Rating:  Crank this eclectic collection to an excellent 8.5, but give it time to grow on you organically.  Don't try to force the record into being Psycho City II or Shot In The Dark II, because you will be being unfair to yourself and to the record.

For more on Jack Russell's Great White, check out these interviews:

Back To Reviews Index
Posted by arttieTHE1manparty at 7:40 PM