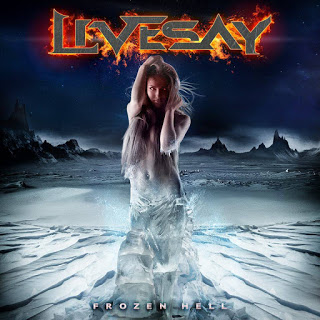 Livesay is one of those bands that I have always heard good things about, but never actually heard.  No particular reason; I had just never snagged an album by the band.

But then Kivel Records signed the band, and I was intrigued.

And then Shawn Pelata got involved...and I had to get the new album!

For those who may not be aware, Shawn Pelata is a wonderfully talented melodic metal vocalist who has fronted numerous bands and projects throughout the years.  Just a few of the bands he has worked with include: Oracle, K-Octave, No Less Human, Liberty N Justice, Line Of Fire, Final Sign, and 7HY.  I'm likely missing something, but anyone familiar with any of those band understands the power Pelata sings with, as he incorporates a strong mid-range tenor with the ability to reach some pretty high range notes when necessary, all while retaining a powerful control of his voice and not drifting into-and-out of range, which a lot of singers seem to do when riding the vocal elevator.  So, with what I already knew about Shawn's vocals, combined with what I had always heard about Gregg Livesay's guitar playing, I felt like this was a perfect storm kinda thing, and I wanted to be present when it hit.

I was not disappointed.

Well, okay, I was a little disappointed.  Why?  Because...dangit!...the album starts off with an intro!  Argh!  Okay, so it's not an album killer, but it feels like an "X-Files" episode is about to begin for the first 30 seconds or so of the album, and it doesn't really fit into the track that it leads into, which just frustrates the crap outta me.  Thankfully, the intro is short and Gregg Livesay's furious rhythm guitars snap me out of my intro-hating frustration as "Leaving" roars to life.  Showcasing guitar skills that many are going to compare to Yngwie Malmsteen or Chris Impellitteri, "Leaving" is a perfect vehicle for introducing Pelata's vocal style to Livesay fans.  I'm told this is actually a re-tread of a song that appeared on one of the band's earlier efforts, but it's new to me and a great way for my Livesay education to begin.  Speaking of Livesay, Livesay--the man (I think I'll just call him Gregg from here on out) absolutely tears into his guitar on a solo that will have any fan of the old Shrapnel Records shredder stable absolutely drooling.  This guy can flat out fly on his axe and it is impressive to hear a man run the frets in such a manner.  Wow.

"Slaved And Bound" starts off much more slowly than "Leaving" does, with Pelata's vocals carrying much of the song's weight at the outset.  That slow tempo is short-lived, however, as the band cranks up the energy on what turns out to be a really powerful, uptempo rocker.  Again, Gregg rips through a solo prior to the last run through the chorus that many people are going to instantly equate to the work Malmsteen did early in his solo career.  This comparison continues with the next song, "With Or Without You", which sounds like it could have appeared on Malmsteen's Trilogy album, what with it's moderately heavy use of keys, especially on the song's intro, it's big drums (listen to the double-kicks on the outro), and the use of layered vocals (lots of "whoa-ah whoas"), and melodic mini-solo drop-ins throughout the song.  After numerous listens, I would have to say that "With Or Without You", which again, is apparently a remake, is definitely my favorite track on the record.

"Age Of Reason" follows up, and in an odd twist, we go from my favorite track on the album to my least favorite here.  This song is the only one on the record where Pelata's vocals don't match up well with the backing vocals, particularly on the chorus when he sings, "I try to see the good in people".  Something is just off.  The rest of the song is very good and Livesay (the man) again flashes a virtuoso-styled solo, but I struggle to get past that vocal issue on the chorus.

Things rapidly right themselves as "Welcome To The Real World" jumps right back to the upper echelon of songs on this record.  A simple acoustic guitar intro leads things in, but the thunder of drums can be heard in the distance as the song builds, with gang vocals adding even more to the build up before the guitars become electric and amplified and the full band kicks in.  Pelata adds a bit of an angry edge to his vocals throughout the verses, and the backing vocals are superb here as they trade on-and-off with the vocal leads in excellent fashion.  The double bass drum work on the pre-chorus sections is also a very nice touch.  Gregg has a particularly fret-melting solo on this song, his fingers flying up and down the guitar's neck with a combination of speed and precision that is nowhere to be found among the vast majority of today's guitar players.  Truly stunning work here.  (For what it matters, this song is the absolute favorite of my four year old who sings along with Pelata throughout the chorus sections!)

"Stop Believing" is another top-notch rocker with a catchy hook and a really nice groove to it.  The backline is absolutely in lock-step on this track, as Mahoney and Huntington carve a pummeling channel through the song that the rest of the band just falls into and glides across ever-so smoothly.  Gregg's solo here is a bit more restrained, as the shred-head shows a bit more of a melodic approach, and it works well.

"Comes Of Age" is the song where I think Pelata sounds the most comfortable, as he really powers his way through the lower end of his tenor range here, and it works really, really well.  In fact, it gives even more emphasis to those times when he decides to elevate and let his upper vocal range really rip.  Gregg has a decent solo here, but the shock of this track has to be the BASS solo that is slipped in before the final chorus run.  Nice to hear Mahoney given a chance to shine.  It's also worth noting that Ty Simms (Bombay Black) provides the keyboards for this song, but, in perfect fashion, they are utilized as a backing instrument rather than being shoved out front like so many melodic/AOR band are wont to do.  Again, its a minor thing to most, but to my ear it is a major deal that actually does damage to a lot of otherwise great songs and/or albums.  In my world, keyboards are not lead instruments.  Just sayin'...and nice job, Livesay!

"Since You've Been Gone" is a track that virtually any fan of melodic hard rock fan is familiar with.  Personally, I was first introduced to the track by the previously mentioned band Impellitteri, and their powerful vocalist, Graham Bonnet, on the Stand In Line album.  Since then, I have heard the song covered by several other acts, with Impellitteri's version still being my favorite.  Livesay doesn't change that opinion, but they come darn close as the interplay between Shawn and Gregg works beautifully, and Gregg rips off one of the catchier solos on the entire record, which is saying a lot.

The speed is turned back up a bit for the title track, Frozen Hell, with big, thundering drums pounding away beneath Gregg's tight rhythm work and some excellent supporting keys (is that a Hammond, I hear) from Stahl that play off of...and along with...Gregg's riffing, especially on the outro to the song.  Again, the backing vocals are a perfect counter balance to Pelata's soaring leads, and the last rocker on the album is definitely one of the best.

The ballad, "Spread Your Wings" closes things out, and despite being a slower track, it is definitely a powerhouse number.  Pelata really packs the emotion into this track, bordering on being Perry-esque at times, although this song is heavier and punchier than any Journey ballad I can instantly recall.  Someone warn the fire department because there are going to be more than a few flames held aloft when this song comes on!  Strong backing vocals, nice, laid back drum work, and tastefully done piano accompany Pelata's powerhouse performance here, and Gregg's solo is a great example of his ability to deliver an emotional turn on the guitar, again in a fashion that Malmsteen fans are likely to instantly identify with. While I realize the odds of the album being recorded in the exact tracking order it appears on the record are slim, it really does feel like you can hear Shawn Pelata growing in confidence with each song, and that confidence and power really shines through here at the end.

If there is one complaint that I have about this record, and it tends to be an across the board issue when I listen to the record, it is that Gregg's solos sound as if they were recorded in a completely different fashion than the rest of the record, and the production quality on the solos is different than the rest of the music.  To my untrained ear, it sounds like the guitars were recorded on equipment used in the 80s, and then spliced into music used in today's studios.  I've listened on three sets of speakers now, as I thought initially it might just be an issue with my computer speakers, but I hear it in every set of speakers I listen through.  It doesn't ruin the sound of the album by any stretch, but it is definitely something I notice.

Livesay carries the melodic hard rock sensibilities of the late 80s and early 90s into the 21st century by combining both metal and AOR elements on Frozen Hell, the 4th full-length album from this band that has been around in some form since 1991.  If all of their previous efforts sound this good, I have no idea how this band has flown under my listening radar for 25 years, especially since I had a serious affinity for top-notch shredders back in the day...and Gregg Livesay definitely falls into that category.

Rating:  A really. really good record that easily cranks to 8!

Back To Reviews Index
Posted by arttieTHE1manparty at 4:20 PM