AS WE ASCEND "Farewell To Midnight" 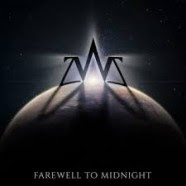 As We Ascend could be a bit of symbolic wordplay for this new band, as they ascend from the smoldering ruins of what I considered to be one of the more exciting, up-and-coming bands in the Christian active rock genre, We As Human.  After a couple of EP releases, a few charting singles, and an even more popular full-length release that was supported by an appearance from Skillet's John Cooper, who also discovered the band, on the track, "Zombie", We As Human seemed to really be going places.

And then they ceased to exist, seemingly disappearing just as their star was on the rise.

There is quite a bit of information about the breakup of We As Human if you use even the tiniest bit of effort on the internet, but you don't even have to go that far, for As We Ascend pretty much confront the entire situation in just the first handful of songs on their new album.  The album opens with the scathing rocker "Hatchet", which features the biting chorus, "Its hard to breathe with your hands around my neck/Its hard to bury this hatchet when its in my back".  Featuring some programmed elements, a nice, solid drum line, and aggressive guitars, "Hatchet" is very reminiscent of the style We As Human utilized on their self-titled album, and the vocals don't sound completely unlike those of WaH's singer, Justin Cordle.  This is likely due to WaH's guitar tandem of Jones and Forshaw handling pretty much everything except the drums on this new album, with Jones even handling the mixing and engineering of the record that was funded through PledgeMusic.  Definitely one of the punchiest, most aggressive songs on the record and probably my favorite track here.

"My Ghost" treads musical territory not far removed from the style that Red handles so well, and As We Ascend does a more than admirable job here.  Venable's drums are prominent in the mix on this track which also features a lot of programmed elements and some big, sweeping movements as the song leads into each of its choruses.  This song has active radio/modern rock radio written all over it, and it shows a musical growth away from where We As Human left off.  Again, one of my favorites on the record after dozens and dozens of spins.

"Expendable" continues in that Red-styled vein, although with a bit more punch to the guitars than "My Ghost" utilizes.  "Expendable" is a decent enough song, but it isn't overly distinguishable from several other songs on the record, although there is some pretty good riffing and solo work going on here, along with some nice guttural screaming of the song's one word title in the background.

"Tell Me" jumps back into the personal issues of the breakup of We As Human, with the band using the lyrics to tell of Cordle's infidelity to his wife, Misty (who appears as a backing vocalist on a song on this record.  Odd???).  I'm not really a fan of the airing of dirty laundry on a record, although I am sure it is done far more often than I am aware of.  But for a Christian band to do this, it seems...I don't know...shameful, to me.  The song is nicely constructed, the atmosphere is dark and haunting, and if you didn't know what the lyrics were alluding to, I am sure it would be a really good "pain" song for some people.  For me, however, it is far too blunt, far too "thumb in your eye" lyrically, whereas "Hatchet" is much more ambiguous in the way it tells its story.  Anyway, I don't skip "Tell Me" by any means, I just don't think it was the classiest move by the band to air grievances against a past member like this.

"When The Gun Goes" is an aggressive, guitar-driven rocker with a huge anti-suicide message to it.  Extremely catchy, even if a bit corny, "When The Gun Goes" is a bit reminiscent of the Saliva hit song, "Click, Click, Boom", and is also a logical lyrical-and-musical follow-up to We As Human's "Take The Bullets Away".  I can see where the song may get a bit annoying to some, but for me, and especially for my kids, the chorus is so easy and so catchy that we all gleefully shout along in full-throated fashion every time the song comes on.  Cheeseballs, we may all be...

"Insulate" is another gritty rocker with some high speed drumming and riffing during the chorus sections, while using some slightly more mellow moments underneath the verses. Its a decent enough track, but much like "Expendable", it doesn't do a lot to set itself apart from a lot of the other rockers out there on the radio waves now.

"End Of Me", which features Zach Myers from Shinedown, is an absolute curveball, as it is so quirky, so not like anything else here that I can't even decide if I like it or not.  At times, specifically during the verses, it reminds me of TwentyOne Pilots (whom I can't get into at all), but then there is this excellent guitar solo thrown in by Myers to tease me back into, "well, maybe this isn't so bad" territory, before quirking out all over again.

The album has a couple more solid rockers in "Watch The World Burn" and "We Fight" before closing with the only true ballad on the effort, "At My Door", which features Brad Arnold of 3 Doors Down.  A really, really strong piece of music, this ballad slips into the top three or four tracks on the album, and at times has me thinking it may even be my second favorite behind "Hatchet".

The production is straight forward, fairly crisp, and has a nice mix.  There is no muddiness that I can detect, and the tracking is done pretty well, also.  The musicianship is really good and draws from the strengths of We As Human, which is to be expected.  New drummer, Venable, is very tight in his work and is definitely a strength on the record.

Overall, the debut effort from As We Ascend is a bit uneven in spots, but not horribly so.  I look for even better work from the band in the future, and if they can lock down a specific style and sound that they are comfortable with, such as they do in the first few tracks and a couple of the last songs, I think they could potentially top their previous band's efforts.

Back To Reviews Index
Posted by arttieTHE1manparty at 9:11 PM