EDGE OF FREE "Edge Of Free" 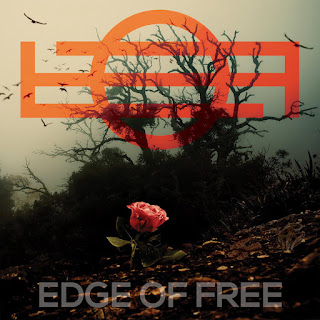 Edge Of Free is an acoustic rock band from Nashville, TN, which I am sure immediately puts people on edge.  Acoustic rock...Nashville...sounds to me like a way to re-label an unsuccessful country act, right?  While that may (or may not) be the case for some bands, rest assured that it is indeed NOT the case for Edge Of Free.  These guys are 100% committed to the rock cause, and despite the word "acoustic" being thrown into their description, make no mistake, these guys are here to rock hard.

From the first spin, I was definitely intrigued and taken by the overall talent of the four guys involved in the band.  In fact, when I first heard "Blood Eagle" burst from my speakers, my first reaction was, "Dang, this sounds like an acoustic Savatage track!"  The guitar tone and style, the haunting lead vocals and expertly utilized backing vocals, and the sparse, yet powerful rhythm section work had me absolutely hooked.  Starting off rather stark in its approach, the track builds to a powerful crescendo in the chorus, with Sneddon's vocals going from soft and somewhat scratchy to a soaring, full-throated power rock approach.  The guitar solo here is expertly executed, and the throb of the bass is infectious.  Just a killer way to open up an album, especially for a new band like Edge Of Free!

"Soul Of Your Grace" stays in the same vein, with Sneddon really stretching his vocal range at both ends, but never stretching to the point of cracking.  This man is a dang fine singer, to be sure, and his "instrument" is every bit as important here as the guitars of Hussey, or the bass and drums of Autry and Ebe, respectively.  He is especially powerful in the chorus section, once again, allowing his vocals to build and build until they are commanding your attention as the music continues to ramp itself up, as well.  There is a little interlude section here that has Sneddon basically doing a bit of spoken word work, before he harnesses that big voice once again and builds things back up for a final run through the end of the song.

"Pony" is an acoustic blues-based number that really relies on some strong songwriting to drive itself.  With some hints of roots-rock embedded in the acoustic hardness of the track, "Pony" reminds me a lot of the way many 70s classic rock bands would incorporate unplugged versions of their music into their sets back in the day.  Referencing their hometown of Nashville in the lyrics, Edge Of Free really pours themselves into this track and the result is easily one of the top four songs on this 8-song effort.

"Higher" has some really cool drum work running throughout the track, and rocks as hard as anything on this effort.  Once again, Sneddon's work, particularly on the chorus, is outstanding, and the rhythm guitar work here is top-notch.  A solid song, although not quite as catchy as "Blood Eagle" or "Pony".

"In My Time (Falling)", sounds a bit more modern rock in its approach than most of the other songs here.  Extremely stripped down, especially throughout the verse sections, this song also features some additional string accompaniment (cello and violin, I believe) that adds to the depth of the song, which I guess would fall into the descriptive realm of  "ballad" territory, although that is not necessarily an accurate representation of the song.  It reminds me a lot of the approach used on "Rooster" on Alice In Chains Unplugged album.

"Autumn" continues in the slower, acoustic AIC vibe, which is a very good thing, in my opinion.  There is a haunting slide guitar used on the solo section of this track, which is about as "Nashville" as this album gets, but it is not done in country way as much as it is done in a bluesy way.

The band's namesake track, "Edge Of Free" brings the tempo back up, and for the first time, I am reminded of the other really big acoustic rock act in recent memory, Days Of The New.  The musical approach on this track reminds me a lot of songs like "Shelf In The Room" and "Touch, Peel, and Stand", although there is some orchestration used here that is not present on DotN's music.  Sneddon's voice also has a lot more of an upper-end range dynamic than Travis Meeks, and he really pushes himself in this area here, reminding me a lot of Chris Cornell (who is thanked in the liner notes, by the way).

"Pushin' The Needle" closes out this effort with return to the more haunting approach used at the beginning of the record, and stands alongside "Blood Eagle" as one of the hardest rocking songs on the album, and is right behind that track for me as far as the best song on the record goes.  Really powerful stuff here, with some nicely crafted lyrics and a stark message of drug abuse that is so reminiscent of the grunge era.  A great groove, some pounding drum work, and the continued emotional assault of Sneddon's voice make this a great bookend on an overall very solid album

The album is pretty short, with just 8 songs and checking in at 35 minutes, which seem to just fly by as the music is so absorbing.  The first time I played Edge Of Free, in fact, I thought my player may have skipped a song or two, as it was seemingly over so quickly!  "In My Time (Falling)" and "Autumn" run a bit into each other, with relatively similar tempos and approaches, which may also contribute to the album seeming to be so short.

Produced by Toby Wright, who has worked with such big names as Korn and...wait for it...Alice In Chains (he produced their Unplugged album.  Hmmmm.....), the album has a great feel to it that is just amazingly moody, powerful, emotive, and darkly attractive.  Every time I put it in, I find myself spinning all the way through it, never once considering switching discs, skipping tracks, jumping backward, or just ejecting altogether.  It is truly one of the rare discs in recent memory that just grabs me and forces me to spend half an hour with the band.  That says something to me...

The packaging is above average, with full lyrics included in the 10 page booklet, along with the requisite thank-yous and credits, as well as photos of the band members.  Mine also came with a band sticker, although I don't know if that is standard packaging or just a throw-in for review materials.