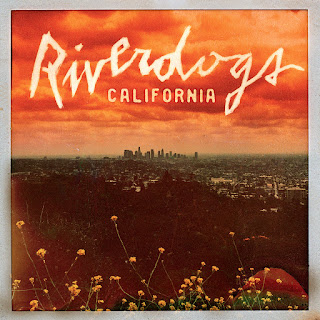 It has been nearly 30 years...27, to be exact...since Riverdogs released their stellar debut, eponymous record.  Yes, there were a couple of Riverdogs releases after that first effort, but neither 1993's Bone, nor 2011's World Gone Mad, had the kind of material to really grab me as a listener or fan. Sure, both had their moments, but nothing like Riverdogs did back in 1990.  So when I was sent the newest Riverdogs effort, California, for review, I was guardedly optimistic that perhaps a better-than-average record was what I was about to listen to.

I got a lot more than I bargained for.

For me, this record, as well as the debut, really starts and ends with the combination of Vivian Campbell's amazing guitar skills, Rob Lamothe's smooth yet still muscular vocals, and some excellent song writing.  This is not to take away from the contributions of Brophy or Danzeisen, but if you take away any part of the trio of items I mentioned, this project would likely fall into the "not bad, but missing something" department, like so many other good-but-not-great records that cross my desk or end up in your shopping cart.

Campbell is, of course, no stranger to anyone from the melodic rock/Hollywood hair scene, having been an integral part of Dio, Whitesnake, and now Def Leppard, as well as the massively underrated one-off supergroup Shadow King (with Lou Gramm), and his guitar wizardry is all over this new Riverdogs record.  In fact, this record is as guitar-driven as probably anything Campbell has done in quite some time, as there is no obvious use of programming or synths on this record at all.  California is just pure, straight-forward, at times blues-edged hard rock from start to finish.

The album kicks off with the decidedly uptempo shiny happiness of "American Dream".  As soon as the "hey hey hey hey" vocals kick their way free of your speakers, the rock n roll show is on.  Feeling very much like the kind of upbeat rock Night Ranger has released on their last handful of records on the Frontiers label, "American Dream" is easy to latch onto and one of those tracks that could very easily have you speeding along a bit too quickly down the highway as it blasts from your stereo system.  The rhythms here are tight, the simple chorus is catchy, and the melody hooks you and drags you in, but the real highlight here...and on so many of these songs...is the guitar acrobatics of the solo, where Campbell unleashes his skill in a flurry that is not stifled by time constraints to just a few notes and chords; he is given ample time to run the frets for your listening pleasure!

"Revolution Starts Tonight" is a bit darker musically, with a bluesy, grungy attitude and some killer song writing.  I especially love the lyrical slant on this song, which was almost instantly my favorite tune on the record, with the first verse musing, "I don't know where the sun goes at night, Maybe She's just sleeping off the drugs.  And maybe we're just living on a blue satellite, And gravity is flowing in the blood".  Musically, this track reminds me of some of the moodier hard rock that Winger has released recently, which is a good thing, and Lamothe's smooth vocals are an absolute treat here.  Again, another excellent guitar solo is embedded in this track which I think most people will grab onto as one of the top efforts on this new record.

"Something Inside" continues along the same stylistic lines as "Revolution...", as it is another darker, more brooding type of song, but the tempo doesn't bog down and the listener never feels the need to drag the flannel and Doc Martins out of their closet just to give the song a fair listen.  A definite blues vibe runs throughout the track, and a hint of smoke whispers across Lamothe's vocals, giving just a tinge of an edge to the smoothness he brings to this set of songs.  The bass of Brophy is also given a bit more voice in the background here, and the record is instantly three-for-three as far great songs goes, with these two back-to-back numbers the definite highlights of the first half of the record.

"Golden Glow" is the record's big lighter-in-the-air power ballad, reminding me a bit of Cheap Trick's "The Flame", especially on the intro and in the drum line and tempo used.  A classic feel on a tasty song, to be sure.  Again, superb song writing is at the forefront here, and the storytelling really lends itself to the big production video I can conjure up in my mind, but sadly this isn't 1989 and nobody really plays videos any longer.  Campbell doesn't dominate the song with a long, flashy solo here, but rather drops in here and there, his guitar singing along with Lamothe, on yet another truly quality song from this quartet.

"You're Too Rock N Roll" has a cool, dirty rhythm hitting right from the start, and Lamothe seems to be to be channeling his inner Don Henley here, as his vocal approach reminds me a lot of "Boys Of Summer", even though the song itself doesn't.  However, a harder-edged Eagles isn't a horrible comparison to the style of music here, laid back and cool, yet still sassy and sarcastic in all the right places.  Campbell rips off a nice solo here, and the drum work from Danzeisen is nice and tight here, with some simple-yet-catchy fills.

The title of "The Heart Is A Mindless Bird" really had me curious about what I was going to get when I got to this track, which is the midpoint of the record.  What it turns out to be is a really cool song with a dark, bluesy vibe to it, and once again, some excellent lyric writing that doesn't rely on tired rock n roll cliche just to give the singer something to vocalize.  "Who will hear the poetry?  The songs, the wasted words, Splintering like shards of glass, The sigh that goes unheard..."  Just really good stuff here and, really, all throughout the record.

"Searching For A Signal" kicks the tempo way back up, matching the opening track as far as pace goes.  Not quite as catchy as "American Dream", and a bit dirtier in the tone of the guitars, "Searching For A Signal" is a solid rocker, nonetheless, and one that finds the guys sounding very much like they are just jamming and having a good time.

"Welcome To The New Disaster" has a bump-and-grind rhythm, more darkly bluesy guitar work, and a smokey barroom vocal approach from Lamothe who does his best to steal the show on this track.  Gritty and soulful, "Welcome To The New Disaster" fits right in with the best material of the first half, and slides easily into my top 5 songs on the record.  Love the overall feel and vibe on this song.

"Ten Thousand Reasons" is another great ballad, with deeply emotive lyrics that manage to stay on this side of the saccharine side of things.  More bittersweet than sickeningly sugary, this is a mature band's love song, not an "I love you, stay with me or I might die" ode of a thousand teen hearts' angst.  Campbell manages to slip in a fairly biting solo without disrupting the tempo and feel of the song, and the rhythm section really supports the overall structure of the track, giving Lamothe a solid foundation to slide his vocals across.

"Catalina" bumps the tempo up just a notch and is a solid guitar rocker, but is probably my least favorite track on the record as it doesn't really hold my attention like the rest of the record does.  The lyrical work is solid once again, and Lamothe is still in fine form...as is Campbell, for that matter...but overall this feels more like a filler track to me than the rest of the material here.  Still, it is a far sight better than much of what gets dumped onto records now to take up space between singles, and I doubt many people find the urge to hit the skip button when "Catalina" comes on.

The album wraps with "I Don't Know Anything", a wistful, mid-tempo rocker with multiple guitar interludes from Campbell, an emotive tenor glide from Lamothe, and a nice, blues-drenched bass line throbbing along, setting the current of the song.  Again, not quite as solid as, say, "Revolution..." or "Something Inside", but still a really, really good song that puts a nice bow on an overwhelmingly solid effort.

There is very little I can say negatively about this record, and I find myself drawn to just put it on "album repeat" and let it run over and over in the background...except that I keep finding myself stopping to appreciate the overall musical experience the album brings.  As I mentioned in one of the song descriptions, this is a mature rock record, to be sure, with deeper thought levels involved in the lyrics of the vast majority of the songs, (the hooky, bouncy "American Dream" being the one true exception here), but that doesn't mean it isn't catchy or inspired.  Quite the opposite is true, in my opinion, as something about nearly every track here definitely catches my attention and pulls me in its direction.  To say that this is a candidate for Record of the Year for me is not an overstatement at this point.

Rating:  Definite cranking material here!  Crank this one up to 9!  Just a really, really good record that I truly love from start to finish.

Back To Reviews Index
Posted by arttieTHE1manparty at 4:16 PM