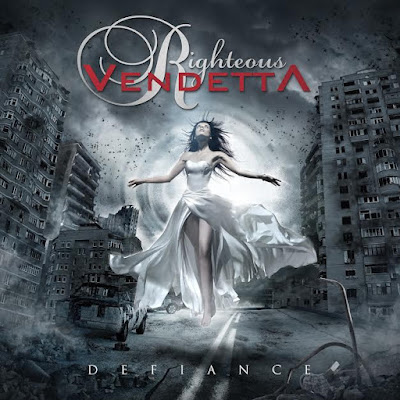 There are several places in the world that come to mind when one thinks of hard music.  Hollywood, obviously.  New York City.  London.  Pretty much the entire Scandinavian region.  Now, you probably noticed that Wyoming is NOT a place on that list.  I mean, just the sparse population and lack of any real cities is a definite strike against trying to make it in the modern rock/active rock scene.  And yet, Righteous Defiance has been working since 2008 to do exactly that, and in 2014, they took a significant step in the right direction with their EP, Defiance.

While not doing anything to stretch the boundaries of the genre, Righteous Defiance certainly has a firm grasp on the Sirius/XM Octane sound on this five track record.  Buzzing guitars and HUGE drums kick things off with the fist-pounding anthem, "Defiance".  Right away, the band asserts themselves as more than merely competent players, as the musicianship is tight and crisp, with an excellent rhythm section and tandem guitars all working together to whip the listener into a frenzy while Ryan Hayes' raspy, core-ish vocals acknowledge "Great is the power of violence, But greater is the power of defiance", while urging the listener to "Come on stand up, Put your hands up, Live in defiance!" against those who seek to keep them down.  Good stuff that I am sure is a fan favorite live.

"Take Over" continues the aggressive riff-fest, with some programming elements mixed in for good measure, especially evident with the stutter effects used on Hayes' vocals.  There is also some nice twin guitar work utilized in this track, adding a bit of a metallic feel to the otherwise decidedly modern radio rock track.  Another anthemic, crowd participation-styled chorus is a big part of this positive rock track that also uses a few slightly softer moments to change things up a bit.

"Hard To Breathe" is probably the most truly radio friendly track here, but that doesn't mean that it isn't just as aggressive as anything else on this EP, because it is still a definite skull crusher.  However, there is a clean melodic element to the chorus vocals that is not a part of the equation on other tracks here, which really sets the harsher verse vocals apart.  The guitar work that is going on in the background is particularly strong on this track, with a little string-bender of a solo even thrown into the mix, and the big drums are still pounding away, the unheralded driving life force of this band, in my opinion.

"What You've Done" has some fast and furious guitar running throughout the track, with a quick little fret run after the first chorus teasingly close to actual shredding in a modern rock track, which just doesn't happen often enough. There's a pretty cool guitar outro on the song, as well, and after hearing "What You've Done", I find myself really wishing that there was this much melodic guitar emploed on more of the songs here, as Olmstead and Heiman really seem to feed off of each other well and have a lot to express musically.

The album closes with the slowest number on the EP, and "With Love" is a really good way to wrap things up.  Again, very radio friendly in its approach, another positive, uplifting message is driven home with aggressive, yet relatively clean, vocals atop a slower-to-midtempo song that finds the band sounding a bit more calculated than elsewhere on this record.  Catchy, hooky, passionate, yet not losing its edge, "With Love" puts a nice bow on this short little musical endeavor.

The packaging is simple, with no lyrics included, but Hayes is not difficult to understand at all.  Positive and uplifting vocals are the order of the day throughout this EP, which is refreshing to hear.  Having toured with such Christian rock heavyweights as Skillet, P.O,D., and Red, the boys have learned how to get their faith and worldview across without making anyone uncomfortable or feeling preached to.

I know at one time you could order this EP directly from the band and it would come delivered with the band group photo in the middle autographed by all the members.  Carl Heiman has since left the group, so I am not sure if there are some pre-signed EPs available, but its worth a shot if you like to have a bit of a personal touch from bands you support.  Check out their website at www.righteousvendetta.com  for merch and band info and tour dates.

Rating:  Being from rural Nebraska...and not that far from Wyoming...I've been pulling for these guys for some time.  This is their most crank-worthy effort to date, despite being just five tracks long.  Crank this to 7.5 and check them out live if you get the chance.

Back To Reviews Index
Posted by arttieTHE1manparty at 8:27 PM